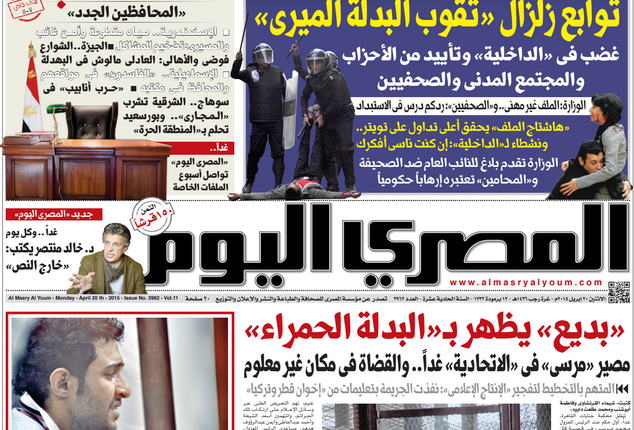 Undeniable self-censorship from Egyptian press since the ouster of the Muslim Brotherhood government by the army in July 2013 resulted in an almost homogeneous attitude towards the state and its policies.

Recent reports from private and state-run newspapers heavily criticising the Ministry of Interior and the practices of the police force emerged out-of-context, raising questions over the motives behind these reports from papers whose editors vowed in March to support all security measures taken by the Egyptian state to confront terrorism and to promote homeland security.

One of the theories raised in the media community was that this criticism was based on instructions from “higher authorities”. Yousri El-Badry, a journalist from the private Al-Masry Al-Youm newspaper who contributed to the paper’s special file on the Interior Ministry, denounced such claims, saying “nobody told me to write”.

The special file, dubbed “Martyrs and Violations”, argued that the Interior Ministry’s actions are considered a “return to the era of [former Interior Minister Habib] Al-Adly”.

El-Badry told Daily News Egypt that the idea that “a certain authority talks to a media outlet over such a thing doesn’t exist”.

“The report was all about sending a warning to state officials that the Ministry of Interior might go back to its practices before the 25 January Revolution. Period,” he asserted.

In Egypt, censorship in the press is not official, but it is evident. The latest of its appearances was in March, when an issue of the privately-owned Al-Watan newspaper, which included a three-page investigative report about tax evasions by 13 ministries and officials in recent years in which the presidency was listed on top, was not allowed to print.

Fatma El-Desouky, a journalist from the state-run Al-Ahram newspaper, who worked on a report tackling torture and mistreatment in police stations, also denied any influence from authorities or the newspaper’s editors on her work.

El-Desouky told Daily News Egypt: “There were no instructions. The story was published as it was written and not a word was omitted.”

“Al-Ahram doesn’t tell us [reporters] what to write and what not to write,” she added, asserting that her work criticising the ministry received praise.

She explained that as she covers prosecution reports, she found a piece of news on the death of two detainees in a police station who suffocated due to bad ventilation. The story was interesting to her, and she wrote a larger piece that included the prosecution’s investigations in police stations.

“Synchronising with other newspapers’ reports that criticised the ministry was a coincidence,” El-Desouky said, stating that “this is not my first story [that criticises the ministry] and will not be the last.”