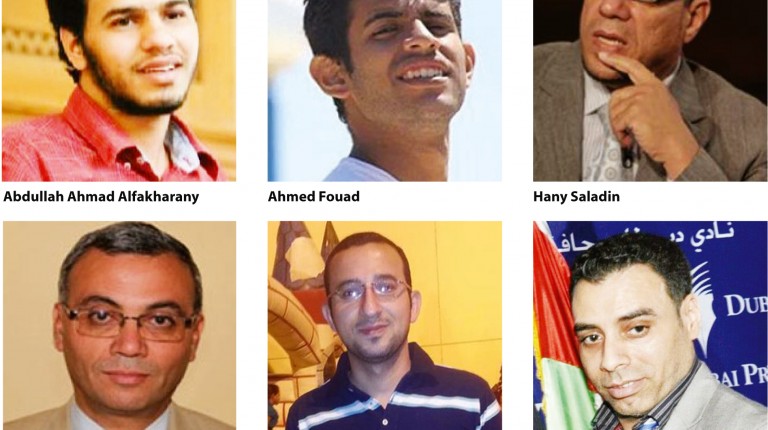 Last Wednesday, journalist Ahmed Gamal Ziada was acquitted of charges against him after over 480 days in prison. This year, too, the three Al Jazeera journalists whose year-long imprisonment made international headlines, also had their case quashed.

Despite this, the intimidation and arrest of journalists for carrying out their work has not abated. In the 2015 Reporters Without Borders press freedom index released this week, the group said “the curbs on freedom of information are as worrying as ever” in Egypt. It placed the country at 158 out of 180 countries measured by free press. The group levels that Al-Sisi’s regime is cracking down on media and dissenting opinion in the name of a war on terrorism.

Last year, the Committee to Protect Journalists (CPJ) put the number of jailed journalists in Egypt’s prisons at 12 at least, calling the country one of the world’s worst ten jailers of journalists. However, this year alone, 18 journalists were given death and prison sentences during the verdict of the Rabaa Al-Adaweya operations case.

However, unlike the ‘Al Jazeera Three’, few of Egypt’s imprisoned journalists enjoy the support of an international, or even national, campaign for their release. Often these journalists, like many political prisoners, are ignored because of a degree of connection to the Muslim Brotherhood, despite having committed no act besides reporting.

Here we profile seven of the many journalists in Egypt’s prisons who have not made media headlines.

Shalabi was a writer for the Muslim Brotherhood-affiliated Freedom and Justice party newspaper. He is part of the Rabaa operations room case alongside Mohamed Soltan, and received a death sentence earlier this month in the case’s verdict. He was arrested in August 2013 and reportedly placed in solitary confinement for six months. Shalabi also had all his money and possessions, including pen and paper, taken from him whilst in detention.

Also part of the Rabaa operations room case, Al-Fakharany is a founding member of the Brotherhood-sympathetic Rassd News Network. He was arrested at Mohamed Soltan’s house on 25 August 2013, despite having no arrest warrants or judicial orders against him. Whilst in custody, it has been reported that Al-Fakharany was subjected to beatings, death threats from officers, and denied food. A human rights organisation reported his conditions as inhumane; an underground cell, with no sun. He and his lawyer were denied the right to look at his papers for six months. During the case, defendants were at times denied the ability to speak to defend themselves.

Fouad was a reporter working for the Alexandria-based news network Karmoz on 25 January 2014. He was arrested “seemingly at random” while covering a demonstration by Muslim Brotherhood supporters in the neighbourhood of Sidi Bishr, according to Amnesty International. Fouad is charged with “joining a group that aims to disrupt the law”, “demonstrating without permission”, “blocking a road”, and “possessing a weapon”, according to news reports. His hearings have been postponed multiple times. According to the CPJ, Karmoz has denied the allegations against Fouad, and said he was doing journalistic work at the time of his arrest. In September, it was reported that Fouad had begun a hunger strike from the prison at Burg Al-Arab, where he is being held.

Abdel Halim, a journalist for the privately-owned Dostour newspaper, is one of the most recent cases of arrested journalists. According to the Ministry of Interior, Abdel Halim was arrested in April as part of a crack down on fugitives, and he is to be charged with cases dating back to 2003 for drugs, theft and bribery. However, the newspaper and other journalists believe his arrest is the Ministry of Interior retaliating in response to a series of critical articles about police corruption and violations on citizens penned by Abdel Halim. The newspaper argued that the ministry interfered to have Abdel Halim cover their affairs, but a fall-out ensued, with the ministry denying having any intervention in choosing reporters. On its front page, the newspaper continued its attack on the police apparatus, condemning the arrest of its journalist, describing the arrest as “the return of the police state”. It added that at the beginning of the week, “heavy armed police forces attacked the headquarters of the newspapers and detained Abdel Halim”.

Salahuddin was a director at Misr25 channel, a member of the Journalist’s Syndicate and a former editor at the Youm7 newspaper, arrested in November 2013. He was also part of the Rabaa operations case. His family report he was arrested on a plane at Cairo International Airport en route to Beirut for medical treatment. His family and lawyer report say Salahuddin has been denied treatment he urgently needs on his eye and for a hernia. He has been denied visits for prolonged periods, had his personal belongings removed, and threatened with dogs.

Hassan was working for the Egyptian News Network, and was arrested in December 2014. During his time in detention, he has been subjected to torture and has undertaken an open-ended hunger strike. According to the Alkarama Foundation, he was arrested from his family home with his wife and two-year old daughter without reason or warrant. He was beaten and his family were threatened and later released. He was later charged with “incitement to violence through the newspaper” and “spreading false news”. It is believed that Hassan is accused of being party to the leak of government telephone conversations which incriminate top officials including President Abdel Fattah Al-Sisi. Hassan is currently being held in Wadi El-Natrun prison, a prison complex known for the widespread use of torture against journalists and opposition activists.

Abdel Nabi was arrested in Alexandria in July 2013 while covering clashes between Muslim Brotherhood supporters of ousted president Mohamed Morsi and pro-army protesters. Abdel Nabi was working for the Brotherhood-sympathetic Rassd News Network during the clashes in which at least four people were killed and 84 injured in the clashes.

According to state-run newspaper Al-Ahram, Abdel Nabi is also being held in Burg Al-Arab prison outside of Alexandria, on charges of inciting riots and possessing weapons. His trial has been postponed multiple times.