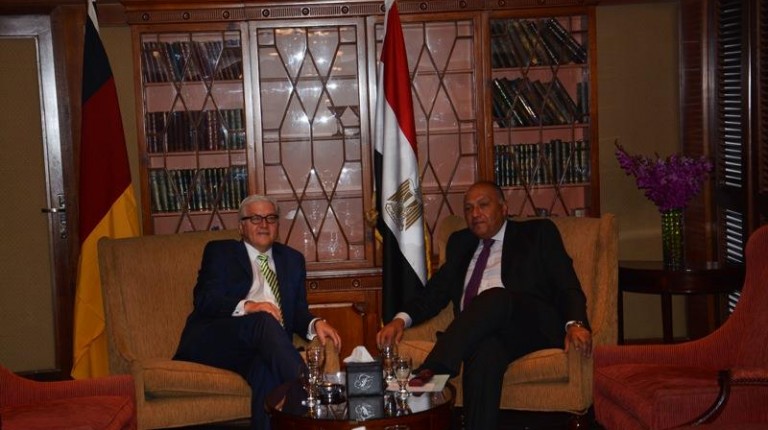 The meeting was set to take place on Sunday evening, but was postponed to Monday morning, with Steinmeier also scheduled to meet President Abdel Fattah Al-Sisi.

The Foreign Ministry spokesman said in a statement Monday that the duo discussed in detail the situation in the Middle East and the importance of intensifying bilateral and regional efforts to eliminate “terrorism”.

Shoukry said Egypt reiterated its warning in dealing with “terrorism and terrorist organisations in Libya”. This comes alongside the need to push for a political solution, especially after the killings of 20 Coptic Egyptians last February by “Islamic State” affiliates in Libya.

The incident recurred when nearly 30 Ethiopian Christians were killed in April on Libyan territory by the same militant group.

Steinmeier stressed the importance of forming a national unity government that includes all Libyan parties.

The situation in Yemen was addressed, as well as the Arab coalition’s efforts regarding the topic. The pair also held talks on Syria, and the possibility of reaching a political solution in the embattled country.

The two topics were also of particular interest to US Representative Devin Nunes, who led a Congress delegation meeting with Shoukry separately on Monday afternoon.

The Saudi-led, Arab-backed coalition announced ‘Operation Restoring Hope’ in Yemen, involving the continuation of airstrikes on Houthi rebels’ targets amid attempts to solve the situation politically.Shoukry and Steinmeier also discussed developments in the Iranian nuclear file along with the possibility of reaching an agreement by the end of next month between Iran and the P5+1 group, and the implications this agreement may have regionally. The P5+1 group includes the five permanent members of the UN Security Council, the US, France, Britain, Russia and China, plus Germany.

Steinmeier is set to meet Grand Imam of Al-Azhar Ahmed Al-Tayeb and representatives from civil society and political parties.

In comments made a day prior to his two-day Cairo visit, Steinmeier said: “Egypt has a fundamental responsibility on the road of stability in the Middle East.”

He added that close consultations with Egypt are “indispensible” in the search for solutions for the deep crises in the region, notably in Libya, Syria and Yemen.