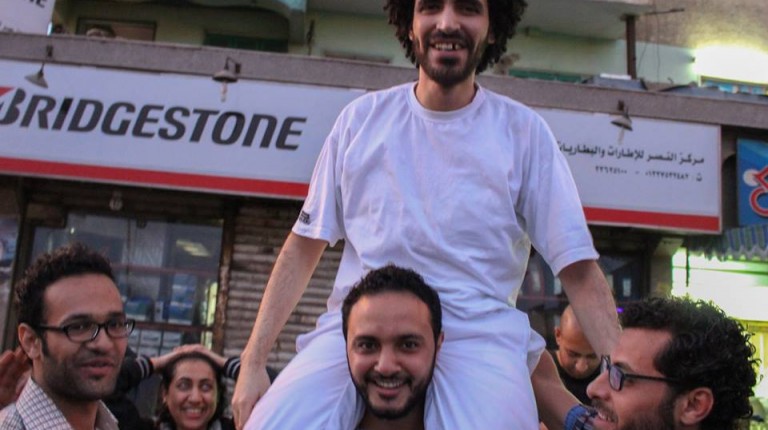 Photojournalist Ahmed Gamal Ziada was released in the early hours of Tuesday morning, six days after the Cairo Criminal Court’s terrorist division acquitted him from protest and violence charges.

Pictures of celebrations and fireworks in the district of Nahia in Giza where the photographer lives filled social media pages. Journalists were also pleased to hear the news, wishing for the release of more detained journalists, and fellow photojournalist Mahmoud Abu Zeid ‘Shawkan’.

Zaida was arrested and imprisoned on 28 December 2013, accused along 76 Al-Azhar University students of illegal protests, violence and setting fire to the Faculty of Commerce building.

Other photojournalists, who were present on the day of the clashes between students and security forces, said Ziada was covering the incidents and holding his camera when the police took him.

Testifying in court, Ziada confirmed he worked for the private Yaqeen network and was assigned the job without even having background knowledge about the events, as like many photojournalists.

Ziada’s case has gone back and forth in courts with different judicial divisions. He further held long resistance battles through hunger strikes he held in prison. Moreover, his brother Mohamed had repeatedly told Daily News Egypt in court sessions that Ziada was always punished for being and stating that he is a journalist.

Ziada further reported on the treatment of prisoners through several letters he wrote in jail. In one letter, he reported that prison authorities were going to hide some of his cellmates due to apparent beating marks before a human rights’ delegation’s scheduled visit to Abu Za’abal prison.

Indeed, the state-affiliated National Council for Human Rights visited the jail the next day and found a couple of prisoners “missing” upon their demand to see them. Mohamed Ziada previously said that his brother was threatened more than once for writing about the situation from inside jail, but that “he was determined to carry on after all”.

Egypt still suffers from a restrictive environment on press freedom as the state constantly harasses and intimidates journalists. This occurs especially with reporters and press photographers on the ground, by seizing their equipment and preventing them from doing their job.