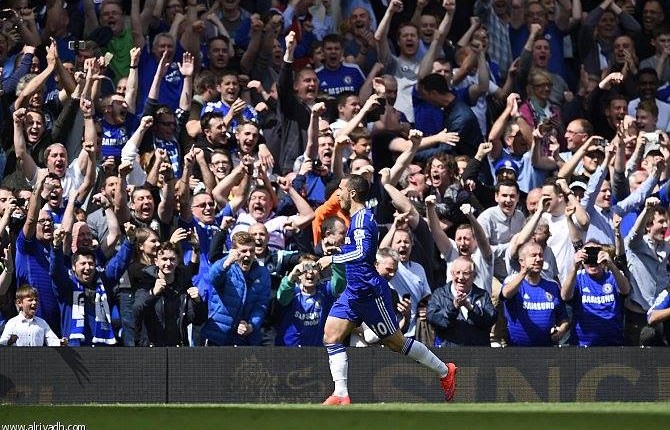 Chelsea FC has won the English Premier League title for the fifth time in its history, five years after its last title. The team achieved victory over Crystal Palace with a 1-0 win.

It was officially announced that the Blues’ won three weeks before the British championship came to an end. Chelsea raised its score to 83 points, scored in 35 matches, of which the team won in 25, with 71%. The team has the highest number of wins and the lowest number of losses in the championship losing only two matches through its entire journey to the title.

Chelsea achieved 14 wins in its stadium out of 17 matches – it has never lost in the presence of its fans. The team scored 69 goals, with rate of almost two goals per match. Ironically, the team achieved more goals in other stadiums than its own.

Chelsea not only has the second best attacking line in the Premier League, but the best defence ever, where its nets were not shacked except for 27 times with rate of less than one goal per match. The British teams did not succeed to shake the blues’ nets on its play fields except for seven times.

The team protected its nets throughout 17 matches, and did not shake its opponent’s nets except for two times. The most significant victory it achieved so far was the 6-3 win against Everton in the third round, as well as the 5-0 win against Swansea City in their match in the 22nd week. As for its huge loss, it was against Tottenham Hotspur.

The team’s scorer, Diego Costa, scored 19 goals, putting him in third rank in the list of the Premier League’s scorers. Chelsea also has the best goal-maker in the championship so far, its Spanish player Cesc Fabregas, who scored 17 goals.