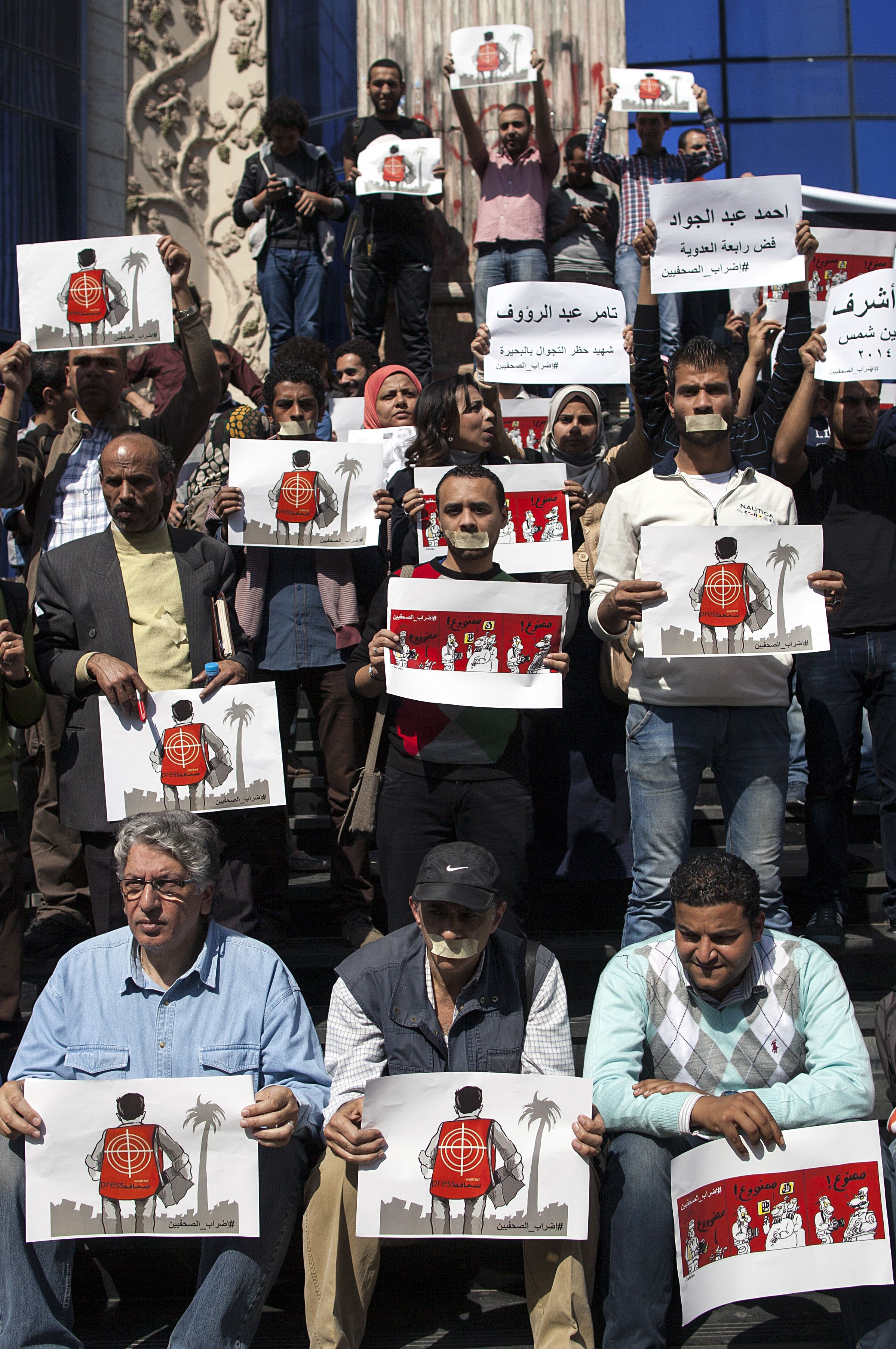 It is barely three days since UNESCO’s commemoration of World Press Freedom Day, an occasion not for celebration, but rather remembrance of abused journalists in Egypt.

There have been 48 cases of violations against journalists in April alone, according to the independent observatory Journalists Against Torture (JATO), in a statement released Tuesday.

At least 24 cases were documented by JATO, in which journalists were prevented from covering events.

Another 10 journalists were verbally insulted and threatened, nine were physically assaulted and some were injured. A further four journalists were arrested or questioned. JATO reported that such attacks can be equally blamed on police personnel on the one hand, and citizens on the other, with 18 cases for each party.

Additionally, there were 11 situations in which government officials were responsible for violations against journalists. Most situations took place in the Greater Cairo area, but also in other parts of Egypt.

As recently as Monday, female journalist Sally Ghaleb from independent newspaper Al-Tahrir was arrested, threatened, and forced to delete the content of her camera by a police officer in the Cairo district of Imbaba.

Talking by phone to Daily News Egypt Wednesday, on her way to meet the head of the Press Syndicate Yehia Qallash, Ghaleb said she went to the neighbourhood, driven by residents’ complaints, to cover a story on abuses against them by the same officer, who is the head of prosecution at a police station.

“They called me, so my colleague Mohamed Abou Zeid and I went to speak to them. They were outraged by the abuses of that officer. We filmed some interviews and were just on our way back when a group of people obstructed the road and started jumping on my car,” she said.

Ghaleb told the story of how ‘those people’ attacked her inside the car, saying that, until that moment, she had no idea why she was being attacked as she thought they were trying to steal her car.

The police officer in question was standing amongst the crowd, Ghaleb continued.

“I could not believe this was actually a police officer. He just let us get assaulted by some thugs!” Ghaleb said. She added that she was irritated enough to ask the officer, who holds the rank of captain, for identification.

“He took me to the station, treated me and my colleague who is a photojournalist in an inhumane manner, threatened to fabricate legal cases against us, incited to physical attacks against us and forced us to delete our camera content,” Ghaleb said.

Ghaleb was obliged to sign a police form of reconciliation, giving up her rights to file any reports against the police officer, amid the continuous threats. When asked about her chances to make rescue calls, she said they threatened more than once to confiscate her mobile telephone.

Ghaleb added that the threats did not stop there. The residents were also in trouble for speaking to her, and that the officer had given orders to ‘criminals’ to follow her and make false accusations against her, in return for ending their pending legal cases.

Moreover, Ghaleb and Abou Zeid were able to recover very few pictures showing the residents’ complaints about police abuses against them and their properties.

This was once more only an example of daily violence faced by reporters and photojournalists while on the job.

Online radio station “Radio Horytna” was also a particular highlight of the month of April. On 4 April, police forces stormed their office and arrested Ahmed Samih on accusations of broadcasting without a licence.

Samih was detained and questioned for one day, according to his claim on his personal Facebook account. He was investigated by the Internet Investigations Inquiries unit and the Artistic Products Investigations Unit, which is in charge of intellectual property protection. He was accused of copy rights’ infringement for using unlicenced versions of software and programmes, including Windows.

Two journalists from state-owned newspapers were prevented from covering the ceremony honouring Indian superstar Amitabh Bachchan. According to JATO, they were also obliged to delete their camera content, and journalist Nadia El-Banna from state newspaper Akhbar Al-Youm was verbally assaulted.

Security forces from the Cairo Abdeen Court also tried to prevent journalists from covering the first trial session of the colleagues of Shaimaa Al-Sabbagh on 4 April. They harassed reporters and asked them to delete any taken pictures of the verbal quarrel incident that took place between them and other journalists.

Inside the courtroom, journalists were repeatedly told “no photos”, and one photographer was aggressively escorted outside the room by a security officer for taking pictures.

Two journalists also faced similar problems while covering a tour by the Minister of Antiquities in Luxor on 6 April.