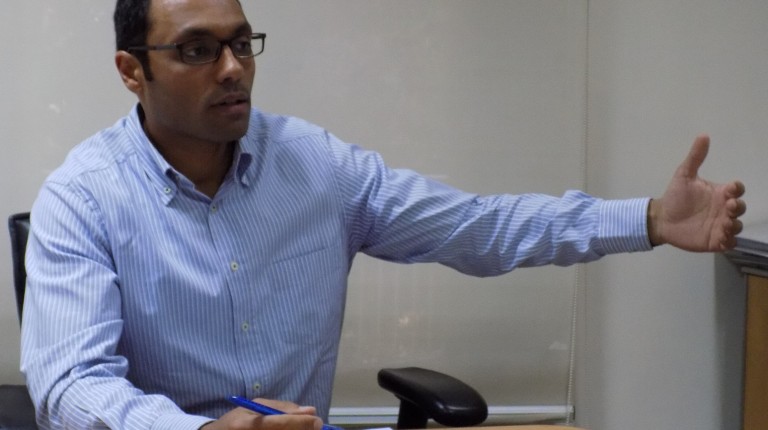 Sahl Hasheesh, 15 minutes south of Hurghada, is a year-round community, and the fastest-growing Red Sea coast destination, according to Abu-Bakr Makhlouf, Commercial Director of the Egyptian Resorts Company (ERC).

After a challenging four-year period for the entire industry, Daily News Egypt spoke to ERC’s Makhlouf to discuss the details of Sahl Hasheesh’s development and its projections for the future.

How large is Sahl Hasheesh?

It’s a 32m sqm project divided into three manageable phases: the first and the second phases are 6m sqm each, with the third and final phase coming in at 20m sqm. What’s unique, though, is that the master plan has been developed as a fully integrated resort city by the world’s leading architects WATG in California. The destination is now a sustainable community for both holidaymakers and year-round residents and investors.

How far along are you with the construction of the city?

Between phases one and two there are currently over 3,000 hotel rooms in operation across six five-star hotels, as well as 1,500 luxury residential units delivered. Phase one also includes a downtown retail and entertainment centre of the community and two 18-hole golf courses. As for the projects pipeline, there are 4,000 hotel rooms and 2,000 residential units under development to be delivered in the coming two to three years. Sahl Hasheesh includes a world-class marina project to be developed in partnership with Orascom Development and Management. Branded “Sawari”, the marina is a large project with berths for 330 yachts between 10 to 60 metres in length. Sawari includes well over 1,000 luxury residential apartments and villas as well as three boutique hotels and a long dining and entertainment promenade. The third phase, as I mentioned, is 20m sqm in size and will come in operation upon completing phase two in the coming few years.

But there is a problem regarding the third phase with the Tourism Development Authority. What is happening now?

We’re in what we believe are the final stages of a resolution with the Tourism Ministry. I can’t say more than that today, but watch this space.

You’re the master developer of Sahl Hasheesh; how did you spend the last four years?

The last four years were very difficult for all players in the tourism industry, but you know what? We’re all stronger for it. We’ve learned how to work under crisis conditions and we’ve been forced to innovate and grow in any environment. The marketing of Sahl Hasheesh began at a time of generally depressed market conditions but we started by promoting local upscale tourism and supported our hotel owners in international tourism initiatives. We attended the most important world travel exhibitions and aggressively promoted Egypt, the Red Sea and Sahl Hasheesh. We knew we had to do the work with no immediate returns but when the market recovered Sahl Hasheesh was ahead of every other destination in the region.

With this success in hospitality, we moved on to grow our second-home share of the market. We completely sold out our first in-house villa project in 2014, mostly to local home buyers. We’ve also launched a JV with market leaders Palm Hills Developments to sell prime real estate properties in Sahl Hasheesh and early signs are showing outstanding sales success. Current developers in Sahl Hasheesh are growing fast. We expect to launch the Sawari marina project soon and there will be more projects coming on line.

One thing is for sure about the past difficult four years: we didn’t take it sitting down. We aggressively invested in marketing, and that’s paid off massively. Perhaps most excitingly, we’ve become the must-attend sea-side destination for upscale Egyptians. Our weekend beach events are legendary and our amazing full-year calendar of events keeps drawing people back. From sales and marketing to our new online presence, the past four years were in some ways a blessing in disguise.

Are there any tourism housing units and hotel rooms that are expected to be finished next period?

Absolutely. Our sub-developers will deliver around 2,000 units in the coming couple of years; Allam Sons are opening a new hotel in there amazing project branded “Azzurra” in Sahl Hasheesh and it will be managed by Time Hotels, an Emirati hotel management company. Travco had announced recently that they will open a luxury hotel under an international high-end brand on their sea-front land plot in Sahl Hasheesh. More announcements are expected in the coming months.

Are you seeing a return of demand for land from developers?

As we’re getting out of the market conditions that dominated the past four years, we’re seeing a strong recovery on demand on land plots for both hotels and residential developments alike. Developers of residential communities, resorts and hotels are after a piece of the hottest destination on the Red Sea. That doesn’t mean, though, that ERC will not be bringing out our own developments, such as the seaside apartments branded Tawaya we’ve launched with Palm Hills. Bottom line: I’m very happy to say that these early signs of recovery aren’t unique to Sahl Hasheesh. Everyone in the industry is starting to see the pickup; the key will be converting interest into sales.

Concerning the recovery, how much were occupancy rates in the past year?

Sahl Hasheesh had an average occupancy rate of 85% over 2014 against a Red Sea average of about 65%. We’re seeing a recovery in international tourist arrivals, for sure, but we’re also seeing more Egyptians taking holidays in Sahl Hasheesh, drawn year-round by an outstanding calendar of activities and entertainment events catering to a healthy spectrum of target age groups.

Do you believe that huge integrated cities are more effective when it comes to market capability?

There’s no doubt in my mind that they are. Total investments for this project amounted so far to EGP 5.3bn across many developments. We’ve catalysed investment in thousands of hotel rooms, of apartments and villas. We’ve also catalysed investment in medical services, restaurants and retail. We’ve built infrastructure, including road networks, our own desalination and tertiary treatment plants, a triple-play fibre-optic network, landscape and community management facilities.

You have mentioned that there is high demand for land in Sahl Hasheesh. Where is it coming from?

We don’t release information on prospects, just on final contracts, so I can’t say much. I can tell you that we have seen exceptional demand from local investors, as well as both Saudi and Emirati investors, who are interested in developing a range of different projects. Egypt investor interest is our anchor, but it is difficult to over-estimate the excitement created in the local market when we also bring in foreign direct investment from big names in the Gulf or Europe. The GCC is definitely on our marketing radar, not just for sub-developers, but for a specific class of home owners who are looking for a luxury home investment on the Red Sea.

Can you quantify the uptick in demand you’ve seen recently?

After four years of stagnation, pent-up demand is really significant. We’re seeing heavy demand not just for potential land acquisitions, but from individual investors. We’ve recently sold 50 villas at our Jamaran development for a total of EGP 100m — that’s a full sell-out of Jamaran.

Is there any difference indicated between demand now and before January 2011, whether concerning Egyptians or foreigners, as well as prices? What about sizes?

There’s a massive difference, of course. Before January 2011, about 80% of individual buyers were foreigners and 20% were Egyptians. Today, that ratio has flipped: about 20% foreign, 80% Egyptian. And the nice thing from our point of view is that prices didn’t collapse after 2011; we’re seeing today a steady annual growth in prices in the 10-20% range, depending on what you’re looking at. There’s no real demand pattern on the size front: We’re seeing equal interest in flats as small as 70 sqm and villas as large as 350 sqm.

What can the government do to help the industry, other than to market the country?

It’s simple, really: Cut out bureaucracy, that’s number one. Number two: Fix the disputes with investors immediately so they can resume investing and growing the overall industry. Number three: Ask themselves what they can do to make the banking system a catalyst for growth on the project funding side of the equation.

Does your company deal with the banking system?

No, generally ERC does not look for bank funding for its projects.