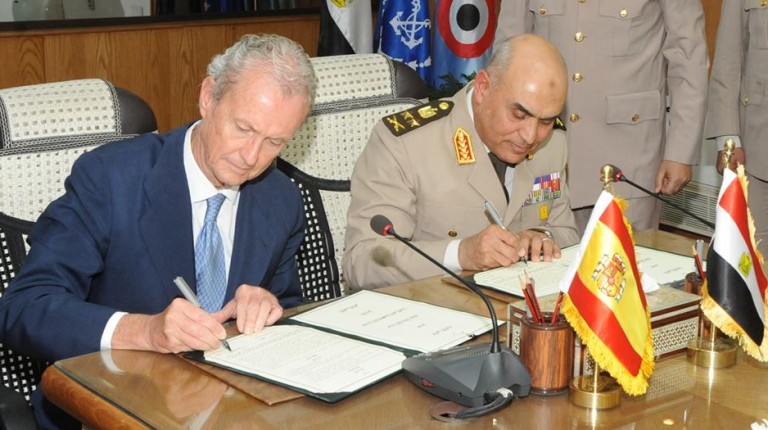 Egypt’s Defence Minister Sedki Sobhi and his Spanish counterpart, Pedro Morenes, have signed a memorandum of understanding (MoU) in military cooperation Tuesday, the first agreement between both countries since 1953.

The MoU, which has been pending since 2003, frameworks bilateral relations between the two countries in the military sector and, and will see the exchange of expertise and training.

The agreement outlines the launching of a joint committee, which will meet biannually, to follow up on the latest developments of the cooperation in science and technology, defence, education, training, health care and military regulations.

Morenes, alongside Defence Chief-of-Staff Gen. Adm. Fernando Garcia Sanchez, visited Egypt on Tuesday to sign the MoU, before continuing on to Djibouti. The last visit paid by a Spanish Defence Minister to Cairo was in 1990, when Narcis Serra held the position.

The European Union imposed a partial embargo on arms sales to Egypt in 2013 following the ouster of the Muslim Brotherhood regime. Foreign ministers of the 28 EU member states recommended suspending the delivery of any military material to Egypt that “could be used in the repression of protestors”. The Spanish government has opted to suspend the concession of new licences for arms sales to Egypt, but did not revoke current ones.

According to Spanish newspaper ElPais, over 90% of Spain’s military sales to Egypt, worth €50m in 2012, are of C-295 military transport aircraft supplied by Airbus Military’s facilities at Seville’s San Pablo Airport. In 2010, the Egyptian army acquired three C-295s and later increased its order to 12.