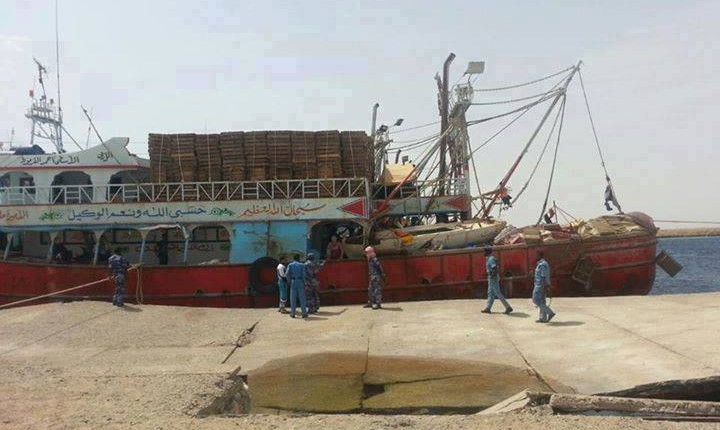 Egyptian fishermen detained in Sudan are expecting a trial session Sunday evening, as they face charges of breaching Sudan’s territorial waters and fishing without permits.

The story dates to last month, when 108 fishermen originally from Mattariya in Daqahleya governorate were arrested and detained by Sudanese authorities, and their three boats seized.

According to a spokesperson for the fishermen, Taha El-Sheridy, if Sudanese authorities jail the fishermen, this will triple the damages because each of the fishermen has a family of at least five people on average.

“We feel that our lives are worthless. We are not as important as the Ethiopians that our country liberated from Libya. Maybe the president needs to have a direct intervention in our situation,” El-Sheridy said in statements to Daily News Egypt Sunday morning.

“They are putting the blame on us in order not to lose a friendly country,” he said.

On Saturday, the Foreign Ministry issued a press release warning Egyptian fishermen against breaching regional waters of other countries, calling on them to “respect other states’ sovereignty and international protocols”.

Foreign Ministry spokesperson Badr Abdelatty added that negotiations with the Sudanese side regarding the fishermen were ongoing, but El-Sheridy said such talks are useless. On 24 April, the fishermen’s trial was paused due to Egyptian demands to negotiate the situation.

The fishermen community is led by Bakry Aboul Hassan in the governorate of Suez, who agrees with El-Sheridy’s version of the story. “The waterway our fishermen used is customary, and they have been passing through it for the past seven months to reach Eritrea,” Aboul Hassan said.

An article featured on the General Authority for Fish Resources Development’s (GAFRD) official website, the fishermen’s legal umbrella, states that by April 2015 and during two years, the Foreign Ministry had issued more than 55 similar notices to fishermen.

The warnings specified the countries of Libya, Tunisia, Algeria, Sudan, Yemen and Eritrea as places where most violations occur, and for which fishermen are heavily fined. They also face dangers by being in “tense regions” such as those under the control of militias in Libya.

“Nonetheless, none of that scares off the fishermen. Their boats wander in restricted zones, with the knowledge of board guards, which only results in catastrophes,” the article read.

Admitting that fishing boats are sometimes present in a forbidden zone, Aboul Hassan assured Daily News Egypt that those are “mistakes”. He added that fishermen occasionally find themselves in regional waters due to water currents, boat breakdowns, and the fact that a boat can easily move in a matter of minutes from international to regional waters.

Usually, a country’s territorial water extends up to 12 nautical miles, according to international laws. GAFRD defined regional waters as any (seas, oceans, rivers) upon which a certain state has sovereignty or control.

Other than that, fishermen are to obtain approval documents form the country they wish to travel to, followed by permits from Egyptian authorities, which include intelligence services.

On the other hand, international waters are equally open for all states for fishing, travelling and exploration activities.

Some of the fishermen in Sudan already received jail terms and fines but there would be verdict appeals, fishermen spokespersons told Daily News Egypt.