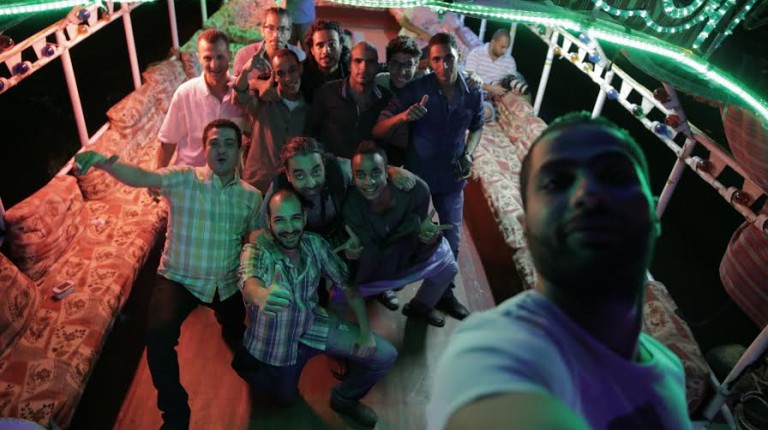 Between the walls that hold some of Egypt’s most precious books and maps over 100 people gathered in anticipation of 30 inspirational success stories.

For the second year in a row, Egypt’s Creative Industry Summit successfully brought together the country’s most promising creative minds under one roof, the Greater Cairo Library, in an attempt to take local talents to the next level.

In addition to film, PR, digital media and marketing industries, this year the summit celebrated the notable growth achieved by the fashion industry over the past year.

Over the course of several months, Hamza Sarawy, co-founder and organiser, studied the local scene and picked a bunch of influencers who contributed to this growth.

The names varied between stylists, bloggers, journalists and photographers who came together to share their success stories in an attempt to inspire the upcoming generation.

Amira Azzouz, founder and editor in-chief of Fustany, kicked off the day. Azzouz started her life-style website in 2009, before graduating from university. Today, her website “Fustany” has several writers and reporters around the Arab region, and more than 1.5 million visitors per month.

To her, fashion is a lifestyle and a means of self-expression. “Fashion is important and not shallow. There is a lot of effort put into this industry, but a lot of people do not see it, they only see the glamorous outcome,” said Azzouz.

Stylist Sondos Al-Ayoub followed next. With a heart-to-heart talk, Al-Ayoub encouraged the crowd not to fear failure, but to embrace it, as she shared personal stories of unfortunate experiences.

“Whoever wants to venture into this world, you do not need a degree. You need short courses with experts who can pinpoint stuff for you and teach you so much through sharing their experience with you” said Al-Ayoub commenting on Egypt’s lack of specialised education.

Al-Ayoub’s talk outlined her personal journey in the world of fashion.

“A stylist is not just somebody who goes shopping. There is a major difference between a stylist who works for print and another who works for production or personal styling,” she said.

Reem Gamil, senior editor at What Women Want Magazine, took the crowd into the world of her magazine. After working at the magazine for six years, Gamil was just the right person to discuss and explain recent trends in the world of publishing.

Maria Sanchez, co-founder of Egypt’s first fashion social network, Slickr, took a technical slant, as she briefly explained the importance and development of fashion in figures and numbers.

“Fashion generates billions of dollars each year and it is expected to generate much more in the coming 10 years,” said Sanchez.

Two years ago, after meeting her partner Mohamed Tarek, Sanchez started observing and studying the fashion scene in Egypt.

Next on schedule was Noha Eid, who unfolded one touching and deeply inspiring story to the audience, which led her to the jewellery world.

Her latest barcode collection was her path towards healing, and she only hopes that it can also inspire other to come over any misfortunes.

“Instead of researching and reading other’s biographies, you should always look inside of you for inspiration,” said Eid.

The peak of the day was certainly the entrepreneurship panel, which combined several experts who proved the importance of a complete fashion cycle that includes all sorts of experts.

Jailan El-Rihany, marketing manager at Nile Projects, paved the way for the panel with a presentation on her specialty, retail marketing.

“Worldwide there are 4.2 million people working for this industry,” El-Rihany explained. “Locally we have 13,000 designers who make around $62,000 per year.”

As a model conveys a certain character, the photographer has the eye to give the brand a distinctive image, the blogger adds her personality to the brand so that people can relate to the items, stylists put the products in a certain way for the audience to perceive them through a unique message, local designers attend the high-end events to add a certain appeal, and fashion social platforms are key for people to interact with the brand, according to El-Rihany.

Local stylist Farah El-Sayed said one of the key issues she faces is the way designers deal with her job. “Local designers do not understand the importance of having a stylist who can put things together and create a brand image,” said Sayed.

Sara Hegazy, a local fashion designer, considered the clients themselves a major difficulty. “Clients are a big challenge as they refuse to wear something different or unique. They do not want a designer who will create something, they want a tailor who can imitate someone else’s work,” said Hegazy.

Local blogger Radwa El-Ziki tried to clarify her role as a blogger and the main difficulties she faces. “As a blogger the challenge is being creative while staying real and looking like myself,” said El-Ziki

Fashion photographer Bilo Hussain, and model Salma Abu Deif took the discussion back to the streets and average citizens who are completely unaware of the flourishing industry.

Dana Khater, founder of shopping website “Coterique”, started her presentation with one influential slide stating: “You are never too young (or old) to start.”

The entrepreneur’s sole message is to step back every once in a while to contemplate and be able to move forward.

“Going to Japan and leaving the website behind was the best thing I have ever done. There I realised that I did not want to help boutiques sell more, I wanted to mix local designers with international ones,” she said.

“Couterique” helped Okhtien, a local brand, sell their bags worldwide, according to Khater.

The event’s only fashion workshop was lead by Maie Zoheir, an independent fashion journalist, about the basics of fashion journalism. Zoheir asked the audience to come up with an idea that shows the personality of both themselves as writers and the publication, which in this case was Vogue India.

Gihad Abdellah, stylist, shared her success story in being one of the leading stylists in the country.

“My sister is my backbone, she taught me everything I know today, everything I do is thanks to her,” said Abdellah.

May Rostom took to the stage to talk about the true core of fashion journalism, aside from appearance, degree, expensive brands, or social-media followers.

The day’s closure was courtesy of the local pioneering fashion photographer Batool Al-Daawi, who dedicated her talk to the upcoming talents. The photographer showed her great love towards fashion, calling it a form of art that needs special education.

“We do not have proper fashion institutions here, so you can teach yourself. I started as a self-taught photographer who never studied photography, I never took a single class,” concluded Al-Daawi.