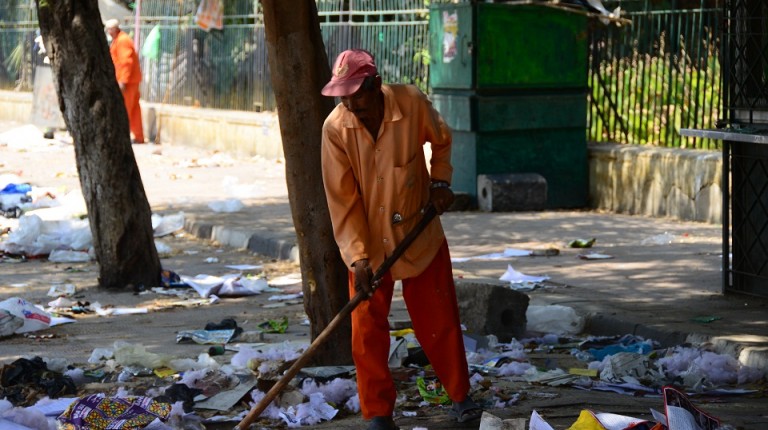 The government will replace Wednesday former justice minister Mahfouz Saber, following major outcry over comments he made regarding garbage collectors’ sons being unfit to occupy the position of a judge.

In a matter of two days, the senior government official resigned over classist and discriminatory speech that caused public outrage, a damage control decision that was taken promptly by the Egyptian state.

However, public outrage was not entirely contained due to the seriousness of the comments. NGO Maat for Peace Development and Human Rights filed a complaint against the former minister to the Prosecutor-General.

Maat demanded that the minister be brought in for interrogation over discrimination and offence to a large sector of Egyptian society. It also demanded that the legal requirements of judges’ appointment be revised if they do not respect the constitution and international laws, and that the results of the investigations be made public.

However, many have argued that in reality, the sons of the less privileged social classes are indeed never appointed to such positions. “You can find the same problem in university appointments for example,” former president of the State Council Hamed El-Gammal said in comments to Daily News Egypt Tuesday.

El-Gammal said that the minister’s statements were discriminatory and catastrophic, and contradict all constitutional and international human rights standards, but are also against logic and the state’s interests. “Unfortunately, our institutions suffer from favouritism, discrimination and nepotism,” he said.

The concern is that there needs to be more reform in the law and the system, not just a replacement of minister, El-Gammal said. “The new minister must fix it and fight people who take advantage from their jobs.”

Back in the 1990s, when El-Gammal was in his position, the selection of candidates was based on merit. “I appointed 175 law students, regardless of their social background,” he said.

What mattered was the reputation of the applicants, whether they or their parents had committed crimes, forgery, illegal business, robbery, the kinds of crimes that would harm one’s position in the society, he added.

Naturally, applicants were screened by State Security and Administrative Control Authority (ACA), running background checks on financial operations and other data relevant to the position.

Nonetheless, judges have repeatedly sent the message that they are the elite of society, and it is practically common knowledge in the society that “judges appoint their sons and so on”.

In 2012, head of the Judges’ Club Ahmed Al-Zind publicly stated that “sons of judges inheriting the job” is a process that will keep happening year after year, and that no power in the country can stop that, according to state-run media Al-Ahram.

Unconfirmed information suggested Al-Zind could be the next justice minister.

Meanwhile, Abdul Kereem Naggar, who studied legislation and law, sees the former ministers’ statements as “no more than a reflection of reality”.

“It’s not just the sons of garbage collectors, but also other categories, such as workers, farmers and others,” Naggar told Daily News Egypt Tuesday. Naggar is the spokesperson of a group of 138 people who were denied working in the judiciary due to their parents’ social and educational background of.

By law, the approval of an applicant’s job in the judiciary is conditioned by the approval of the Supreme Judicial Council (SJC). Naggar said that on 24 December 2013, the council approved the appointment of the group of 138 people as assistants in the general prosecution authority, a job considered to be the first step towards a judicial career.

“After that the decision was pending a presidential signature, which [former president Mohamed] Morsi refused to do. Also officials of the SJC who had issued the agreement retired. The appointed and current SJC head amended the job requirements to include an article on the necessity for an applicant’s parents to have completed a higher education degree,” Naggar explained.

As yet, the rejected youth are waiting for a say regarding their nearly two-year pending issue. “Legally, we are hired,” commented Naggar.

Moreover, while discrimination is obvious in judicial jobs, is not limited to that. Additionally, other forms of social discrimination are gender-based.

Further, there are many who believe that the minister’s comments reflect a reality that is symptomatic of a wider problem; that of the gap between the wealthy and the poor in Egypt.

Wael Eskandar, an independent journalist and blogger based in Cairo, wrote criticising the fact that none of the economic policies work in favour of social rights or narrow that gap.

In a conversation with Daily News, Eskandar explained that economic policies target growth in terms of numbers, not actual development. He believes that the current economic situation is worse because of the military monopoly of the market. Additionally, he sees flawed investment laws that do not allow the monitoring of corruption.

“And the more corrupt the judicial system, the less they stand in the face of corrupt deals. If you don’t have a judiciary that’s going to arbitrate between investors and corrupt officials, there is no possibility of meaningful investment,” Eskandar said.

“There is a disparity even in dignity,” he added. “Christians are not allowed in many jobs, Bedouins are marginalised. It’s like we are all traitors. We’re creating a parallel world filled with tension and aggressiveness towards those who have resources,” he added.