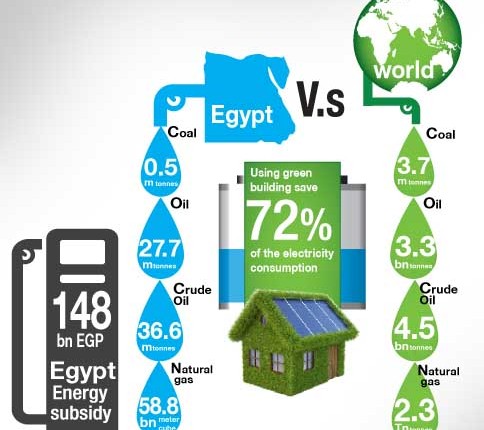 Egypt’s natural gas consumption amounted to 58.8bn cube metres, and coal consumption amounted 0.5m tonnes in 2013/2014, according to the Egyptian General Petroleum Company(EGPC). The consumption of crude oil amounted to 36.6m tonnes, and the consumption of oil amounted 27.7m tonnes, EGPC said. Energy experts said Egypt loses 20% of its electricity energy due to poor and old networks, in addition to a lack of oil and natural gas supplies. Egypt currently suffers from a major energy crisis due to the increase in demand, and low supply. As such, the government has turned to the coal industry as an alternative source of energy to generate electricity.

Energy subsidies cost EGP 148bn, a high cost due to the dependency on traditional resources in generating electricity at a rate of 95%, while only 5% of consumption comes from renewable energy. On the other hand, the international rate of dependence on renewable energy is 23%, with a steady increase in the upcoming years. The world is heading towards generating power from solar and renewable energy and using green solutions, which if it applied in Egypt would save 72% of the electricity consumption.

The rate of international consumption of crude oil is approximately 4.5bn tonnes per year, and has been growing every year since 2010. Crude oil supplies are expected to be depleted by 2050. The rate of consumption of natural gas is approximately 2.3tn cube metres every year, and natural gas is expected to deplete by 2070. Oil consumption amounted to 3.3bn tonnes, according to Hisham Farouk CEO of Greenergy Company in the field of renewable and green energy consultancy.

Meanwhile,  the rate of coal consumption, which amounted to 3.7bn tonnes, increases every year at a higher rate than oil consumption. Egypt has the opportunity to make use of new sources of energy, especially solar, as in Egypt, there are 300 sunny days in the year, according to solar research professor and former head of solar research at the National Research Institute of Astronomy and Geophysics (NRIAG) Rabab Helal. Solar energy will preserve the environment and decrease CO2 emissions by 500gm for every KW that would otherwise be produced through using traditional energy plants. In addition, new and renewable energy plants will save 250-350 litres of diesel per year, according to Helal.