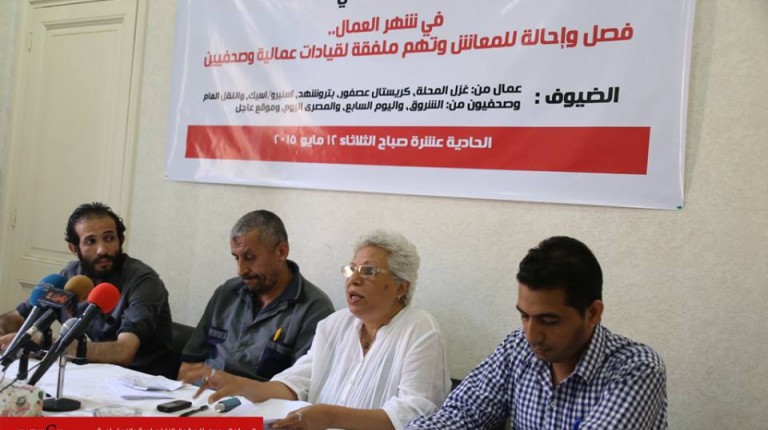 The Egyptian Center for Economic and Social Rights (ECESR) organised Tuesday a press conference shedding light on the situation of laid-off public company workers and that of laid-off journalists.

Three main issues were tackled: the fabrication of charges for labour leaders; the issue of laid-off journalists; and legal insights into the recent decision by the High Administrative Court to force striking workers into retirement as well as the new Civil Service Law.

Al-Fayoumi, laid-off worker from Mahallah, talked about previous protests organised against the “corruption policies deliberately adopted to incur losses for the company”. He added that the Accountability State Authority (ASA) had exposed this corruption and valued the company’s losses for the year at EGP 1.3bn.

Ahmed Mahmoud, from the public transportation sector, stated that workers were the ones who carried out the 25 January Revolution, but that now they were “paying the price” for their activism.

Regarding laid-off journalists, Youm7 journalist Wael Abdel Aziz expressed his concern regarding the fate of journalists, who have been facing arbitrary suspensions since the start of 2015.

“Instead of being the voice of the laid-off worker, journalists are themselves being faced with the threat of arbitrary suspension,” Abdel Aziz said.

Suspended journalists are set to form an “Association for Suspended Journalists” through which they could voice their demands to the Press Syndicate, press institutions and the state, according to Abdel Aziz’s statements. Furthermore, he called on journalists to take part in a 10 June strike, as well as a protest on behalf of suspended journalists in front of the Syndicate next Sunday.

Concluding the conference, labour lawyer Haitham Mohamadein pointed out the difference between two types of strikes; labour strikes and ‘Capitalist strikes’. He questioned the reasons behind the state’s “double standards” when dealing with both types, saying that businessmen “strike” when they deliberately incur losses for the company or shut down factories or threaten to withdraw investments outside of Egypt.

The High Administrative Court ruled on 28 April to force into retirement any employee charged with striking and “delaying the interests of the public”.