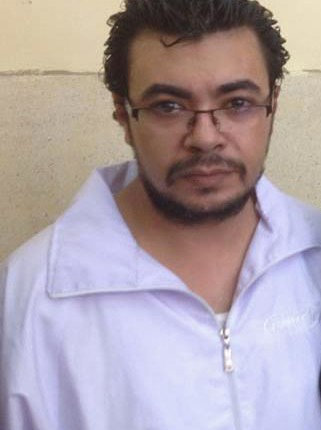 A journalist imprisoned on charges relating to his conversion to Christianity over seven years ago is being mistreated by prison officials and fellow-inmates, his lawyer told Daily News Egypt Wednesday.

Beshoy Armia, previously Mohamed Hegazy, is currently being held in the high-security Tora Prison on blasphemy charges, despite his case having yet to reach court.

Lawyer Karam Ghobrial said that whilst in prison, his client has been severely physically beaten and subject to verbal abuse, some of which is directed at his faith and conversion to Christianity. Armia has been denied a Bible and has not had glasses since they were broken intentionally some time ago.

Beating and torture is widespread in Egyptian prisons. In April alone, the El Nadeem Centre for Rehabilitation of Victims of Violence found that 10 people died in detention facilities, some from torture and others from inadequate healthcare. There have also been 68 case recorded of torture in State Security offices.

Ghobrial has now submitted a complaint to the Prosecutor General regarding the status and mistreatment of his client. A copy of the document, seen by Daily News Egypt, states that Armia has been held without legal basis, beyond the maximum six months allocated for detention in extreme cases.

The document holds that pre-trial detention should be used when there is a fear that the accused will escape or commit further crimes. The detainee should be treated with dignity and not tortured, which violates the constitution.

In addition to Armia’s release, the document also calls for the investigation of police officer Ahmed Fawzy at Tora Prison, who has been identified as responsible for the majority of abuse against Armia.

Armia was initially arrested in 2013 for “spreading false news”, and given five years imprisonment by the Minya Misdemeanour Court. He had been covering Muslim Brotherhood protests that took place following the ouster of former president Mohamed Morsi.

An appeal submitted by Ghobrial successfully reduced the prison sentence from five years to one year in prison. On the day, however, Minya Criminal Court approved Armia for release and he was detained leaving the court room by National Security who referred him to State Security Prosecution in Cairo.

The current charges are believed to be a legal complaint submitted by two lawyers who maintain that the manner in which Armia converted to Christianity from Islam was blasphemous and “insulting to religion”. Ghobrial has launched a public campaign to have his new name and religion reflected on his ID, after he was denied by court following his conversion.

Lawyer Ghobrial told Daily News Egypt that in both cases, Armia’s Christian religion and conversion were a key element in his unfair treatment. In Armia’s initial case, the first item the arresting officer wrote in the report was: “I was informed that a convert came to the city of Minya.”

Ghobrial states Armia’s conversion played a huge role in his sentencing, “when this kind of thing is written in your report it works against you”, despite it being legally stipulated that one’s faith should not play a role in influencing legal cases.