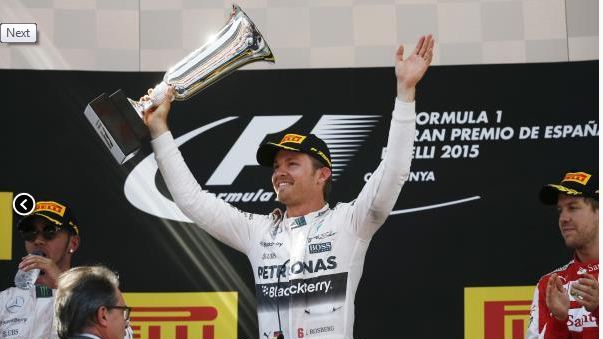 Hamilton has won three races this season in Australia, China and Bahrain. However, Vettel, who won the World Championship title four consecutive times, seized Hamilton’s place in this season’s competitions and achieved the ninth victory.

Hamilton leads the Formula One standings, scoring 111 points. Rosberg comes in the second place with 91 points. In the third position comes Vettel with 80 points.

It is said that nine different racers won the Barcelona race the past nine years over the 25 editions of the competition, with Rosberg being the latest winner, even though he is ranked number 19 worldwide.

The following is a simple analysis about the performance of a few  teams who participated in the Spanish race.

After passing the front line, Hamilton recorded the fastest lap. Unfortunately, he had to pay the price for his poor start and for stopping thrice in the maintenance centre, while Rosberg stopped twice. Mercedes won the first two positions for the third time over five races this season.

For the fourth time, Vettel wins in five races this season. When all of them stopped in the maintenance centre for the first time, Räikkönen had the opportunity to improve his position from where he had started.

After breaking the ninth position, Massa stopped three times in the maintenance centre, while Bottas stopped only twice. Williams won over Red Bull, former world champion for the Formula One World Constructor’s Championship (WCC) by 51 points.

The team manager of Red Bull racing, Christian Horner, accepted the loss of his team against their competitors in the finals. Looking at the bright side, all the drivers arrived safe. Ricciardo said that his ambition was to achieve the seventh position.