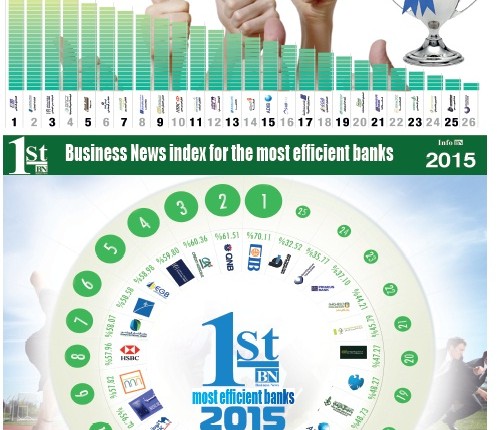 Business News for Press, Publishing and Distribution Company, announced its fifth annual edition of the banking sector performance index, which was expanded this year to include the quality of capital and the capability to increase the market share.

Commercial International Bank (CIB) was ranked the best bank in Egypt in terms of the market value for 2015, after being on top of the Business News index, followed by the Union National Bank (UNB) Egypt, and Emirates NBD.

In a press release after launching its annual index for 2015, Business News stated that the indexes reflect a strong growth for the banking sector in Egypt for the past year as well as attempts of senior market players to boost their capitalist regulations and fierce competition on the market shares.

As per Business News, there has been great development in the interest of banks to be more open, including the government-owned banks which still need to be more open, reflecting a greater number of banks covered by the indexes. There also have been positive developments in spending on technological banking, modernising the systems, and increasing the communication channels with customers, which can be explained within their interest to raise the number of customers in the coming period.

The Business News index comprises four main indexes and 17 sub-indexes which measure the speed and strong performance of banks as well as customer satisfaction with the services offered.

The main four indices are: the most efficient bank index, the fastest-growing bank index, the customer satisfaction index, and the social responsibility index in the banking sector.

UNB-Egypt recorded the highest expansion rate in the Egyptian market last year, and it succeeded in ranking the top on the fastest-growing bank index thanks to its assets growth by 41% and its market share by 21%.

National Bank of Egypt (NBE) topped the customer satisfaction index for the second consecutive year, thanks to its spending on IT, which amounted to 40% out of its total investment expenditure in the fiscal year (FY) 2013/2014, and the significant expansion in ATMs network that reached 1,735 machines over the country.

Customer satisfaction index requires surveying opinions of companies over the level of their satisfaction with dealing with banks. 255 companies participated in the index this year, which are affiliated to most of the major sectors of the Egyptian economy. CIB acquired the highest rates of companies’ trust.

A number of the largest companies listed in the stock market, classified as first category companies among banks’ clients, participated in the index, in addition to a number of international brands working in the Egyptian market.

In the index of the most efficient Egyptian banks, CIB came on top of the list for the third consecutive year in spite of the slight increase in rates of irregular loans. However, it was able to maintain the highest yield on shareholders’ equity with a rate of 33%.

In the social responsibility indicator, the NBE and ABC Bank came on top of the list of the highest spending banks on social services in comparison to revenues, which amounted to 4% for each.

Business News made modifications to the growth and efficiency index for this year in order to focus on the quality of capital and increase deposits utilisation for loans in the light of the decrease of this rate in the Egyptian banking sector, in addition to expanding market shares.

The efficiency index included a sub-index for the first time this year in order to measure the sufficiency rate of the first segment of capital of risky assets, this is in order to determine banks which are able to create a state of balance between size and quality. The growth index also included a sub-index to measure the growth of market share. The new index revealed that banks whose growth was less than 15% last year suffered a loss.

Creating the new sub-indexes was followed by a redistribution of the balances to give more importance to the rate of loans and deposits operations, the rate of growth in loans, with the exception of the deposits growth index.

“Business News” is an institution working in press, publications, and publishing financial indices as well as organising economic conferences. Business News publishes banking sector performance indices and the best credit card indices in Egypt on an annual basis. It also publishes indices of the performance of Egyptian investment funds.