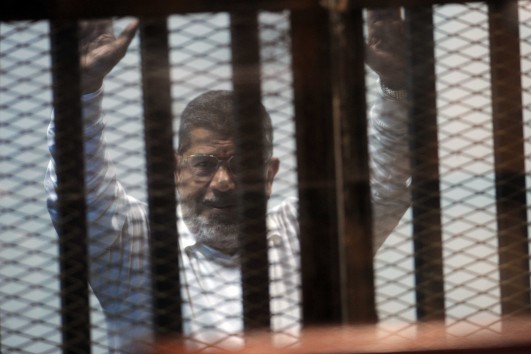 The party said in a statement following the court’s session that the “military coup and its leader will pay heavy price for their crimes against the Egyptian people and their elected leadership”.

The Cairo Criminal Court sentenced Morsi to death in the Prison Break trial, alongside scores of Muslim Brotherhood leaders, both in this case and the espionage case.

The court referred the files of 106 defendants, including: the former president; Muslim Brotherhood Supreme Guide Mohamed Badie; former parliament speaker Saad Al-Katatni; and renowned Muslim scholar Yusuf Al-Qaradawi to the Grand Mufti for consultation. This is a routine procedure that precedes the ratification of a death sentence, setting the 2 June session to give final verdict in the case.

The party added: “The unlawful verdict by some judges against Egypt’s elected president and his companions makes all options available before the revolutionaries to free the country from the gang that took over power by arms.”

“It has become clear that the SCAF and its gang are insistent on driving the country to the abyss what demands a quick and decisive action by all true-hearted to prevent the country from the dark fate the SCAF is driving it to,” the statement added.

Boumedouha called on Egyptian authorities to disregard evidence obtained from Morsi and others when they were “subjected to enforced disappearance”.

He also called for Morsi’s release or retrial stressing that “any further criminal proceedings must be in line with Egyptian law and international standards”.

The prosecution accused Morsi and 34 Brotherhood members of storming Wadi El-Natrun prison and escaping it in the early days of the 25 January Revolution. The charges included kidnapping police officers and detaining them in the Gaza Strip.

“The authorities should also drop the charges of escaping from prison in January 2011, as at the time Morsi was held in administrative detention, under emergency powers and without a judicial detention order,” the Amnesty statement read.

The rights group also criticised the mass death sentences that have been frequent since the ouster of the Muslim Brotherhood government in July 2013.

“The death penalty has become the favourite tool for the Egyptian authorities to purge the political opposition. Most of those sentenced to death by courts since July 2013 have been Morsi supporters,” Amnesty noted.

The organisation called instead for ensuring “the independence and impartiality of the justice system and bring to justice all those responsible for gross human rights violations”.