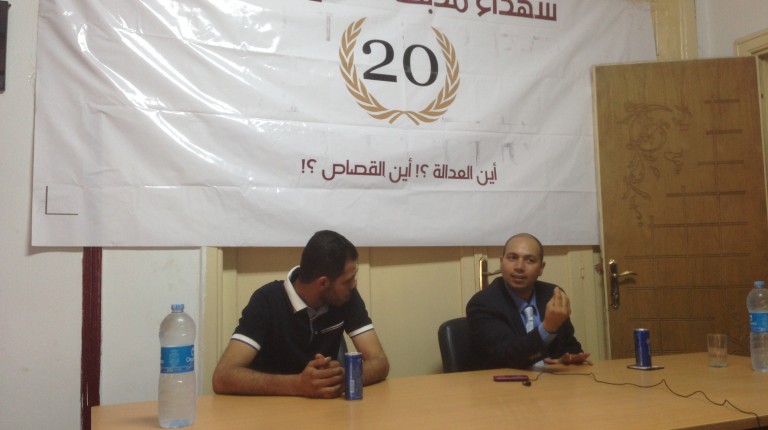 A press conference called by the families and legal representatives of those killed in what has became known as the ‘Air Defence Stadium massacre’, decried the absence of media attention and clarity about the events and subsequent court cases.

Hosted at the office of lawyer Mohamed Rashwan, who is working on behalf of the victims’ families, on Thursday near Attaba in downtown Cairo, the press conference also suggested that their legal representatives will work to uncover the truth.

A banner displayed behind the speakers commemorated at least 20 who died when the queue to enter a February match between football teams Zamalek and ENPPI turned in to a stampede. It read: “Martyrs of the Air Force Massacre. Where’s the Justice? Where’s the story?”

“We’re still studying the papers, we will study whether the Ministry of Justice has a role in this massacre, whether it is an intended action such as Port Said massacre or it is a security mistake,” lawyer Rashwan said.

Rashwan commented that he is not working with the more prominent Ultras’ lawyer Tareq El-Awady over differences they have. The press conference was called after spending time with families and the lack of correct news in the media.

Rashwan said, that in the 18 May court session, the civil lawyers will demand an investigation in to any official who could be behind the disaster, so far no official has been charged.

“Officials who are responsible for securing matches are known, but we need to know who didn’t give the people tickets, and who made the metal cage and who fired the tear gas,” he said.

“I do not have any political affiliations. We will demand accountability of any official, including Mortada Mansour”, Rashwan continued referring to the notorious Zamalek SC chairman, who has long-running antipathy with his clubs Ultras.

The Interior Ministry said violence occurred after Zamalek supporters, known as Ultras White Knights, tried to attend the game without buying tickets and also suggested that Muslim Brotherhood members tried to instigate the stampede. The fans deny both accusations, and accuse ministry officials of responsibility for firing teargas at the crowd that was tightly packed in to a narrow metal cage surrounded by barbed wire. Other report seeing officers shoot birdshot at the fans after the confused melee sparked.

“Huge numbers of Zamalek club fans came to Air Defence Stadium to attend the match…and tried to storm the stadium gates by force, which prompted the troops to prevent them from continuing the assault,” the ministry said afterwards.

The 16 accused of responsibility in the case, due to resume on Monday, are all fans and members of the Muslim Brotherhood, according to the General Prosecution.

Ahmed Samir, a brother of a young man who died in the stampede, spoke at the press conference: “We want Justice. My brother was not a terrorist. His only problem was that he wanted to go to watch the football.”

“It’s been three months since the accident and nobody is talking about it, there is not attention,” he said.

“We will accept the court’s ruling whatever it is but we want our rights,” Samir said, suggesting he had faith in the judiciary, but when asked who killed his brother he said: “that’s for God to say.”