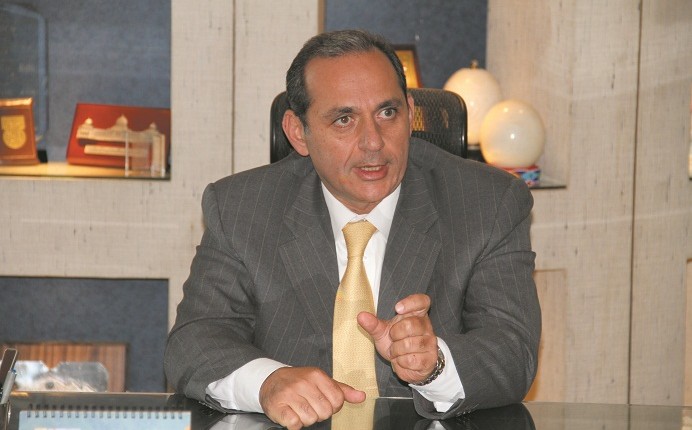 In an interview with Daily News Egypt, National Bank of Egypt (NBE) Chairman Hisham Okasha outlines developments his bank is looking into in the coming months. Alongside the completion of phase two of developing the bank in the next month, the NBE also aims to increase liquidity, which would enable the bank to fund all economic sectors.

What are the NBE’s future plans?

The National Bank of Egypt (NBE) aims to achieve a 10% growth in all the bank’s indicators during the current and the next fiscal years through financing all economic sectors as long as they enjoy economic viability and enough solvency for financing.

NBE’s deposits’ portfolio is constantly increasing, reaching EGP 425bn by March, EGP 88bn of which are deposits in foreign currency, which is equivalent to $11bn.

Loans make up EGP 136bn of the bank deposits until last March. Therefore the available cash is plenty so we don’t have to prioritise financing for sectors or clients.

The portfolio for financing small and medium project achieved remarkable growth over the past six years, increasing from EGP 3.3bn in2008 to EGP 13bn, with an increase of almost EGP 10bn, and the bank hopes to raise it to EGP 16bn before the end of this year.

What about the plan for developing the bank?

The bank completed a large part of its development plan and modernising infrastructure technology, as it has the biggest database centre and is preparing to launch another centre to accommodate as much new and old customers’ data as possible.

The bank has pumped large investments to expand the ATM network from 500 ATMs in 2001 to 1,914 machines today, and the bank plans to add 500 new machines by the end of June 2016, in addition to the replacement and renovation of the old machines according to service updates through the machine. This is besides updating the infrastructure to accommodate the increase in the numbers of ATMs. The bank has increased the number of POS machines to 11,000 machines, and they are currently being updated.

Phase two of the software updates is set to be finished during the next 18 months so as to be able to accommodate the rest of the services of the bank and its sectors. The bank has also remarkably developed its software on mobile phones lately, which enabled some products, such as money transfer through ATM, payment by phone “Phone Cash”, and internet banking, as well as products that increase clients’ ties to the bank such, as Al-Ahly Points and credit cards that enable clients to purchase flight tickets from any airline.

Does the bank need to open new small branches?

The bank doesn’t need to open new small branches, since the bank already has a large network of branches spread over all govern orates of Egypt. The bank plans to increase its branches by 200 branches in three years, 30 branches are planned to be opened by the end of this fiscal year.

The bank’s client base has increased over the past fiscal year, especially small and medium projects’ clients, which reached 11,000 clients, in addition to attracting new clients through the system of contracts with payroll companies.

What about the NBE’s share in the project of mechanising public sector salaries?

2.1 million public sector employees are already paid their salaries through banks, of which NBE pays about 50% and is still coordinating with other units of account to increase their numbers according to the ministry of finance’s project. However, it is necessary to increase bank investments in ATMs in the upcoming period in order to accommodate the process of paying the salaries of seven million employees, while avoiding congestion and repeated ATM system problems, in addition to the importance of coordination in the printing and distribution of the cards to ensure that the service is properly offered.

Are there plans for the regional or international expansion of the bank?

The bank is currently focused on local expansion and participation in financing different projects for Egyptian economic development, and there is no need for regional or international expansion at the moment. However, the bank is keen to continue is existence in the international markets, and from that standpoint plans to renew issuing bank bonds, which will mature next June. International bonds maintain foreign currency resources to the bank and emphasises the confidence of markets and investors in the Egyptian market. The bank has an affiliated agency in Dubai, besides its presence in global financial capitals, to facilitate international trade operations.

What about the debt portfolio for the bank?

The troubled debt portfolio declined from EGP 26bn in 2008 to EGP 6bn now. Settlements were concluded with an amount of EGP 18bn, and we achieved great revenues despite the recent instabilities. The important thing is for the troubled rates and the quality of the portfolio to stay at the same rates. I highly doubt that a constant increase in the portfolio will take place, because the bank has enough allocations from past revenues that would be enough to support the troubled debt portfolio and reschedule the debts of the rest of the customers. We have to attract foreign investments and external funds to support local funds. NBE started coordination with a number of banks and mega projects to pump investments in different economic sectors.

What were the most prominent deals for the bank in 2014?

We signed a funding contract worth £120m with the European Investment Bank during the Economic Summit in March. This is the second fund since 2012 for small and medium enterprises as well as medium-sized companies. The bank succeeded in managing the first fund from the European Investment Bank which amounted to £80m, which facilitated the procedures of the new contract.

The bank also signed a protocol to reclaim 10,000 acres of land in Farafra through Al-Ahly Co for Land Reclamation & Cultivation within five years, with investments worth EGP 40m of the total investments at EGP 200m.

How would you evaluate the latest procedures from the Central Bank of Egypt?

The Central Bank of Egypt’s (CBE) latest regulations succeeded in eliminating the black market and in the return of the dollar to banks, which encouraged investors to make legal deals, instead of deals in the parallel market. However, when the investors turned to illegal deals, it was something out of their hands.

The rumours about a pending waiting lists for dollars in NBE are false. Our bank applies the CBE’s regulations with regards to the currency’s priority for the main goods. The latest regulations helped increase the flow of the foreign currency.

NBE received an advanced rank in the Business News indicators. How would you evaluate this?

We are proud of this, and we appreciate our customers and constantly try to improve our products and facilitate the procedures of the banking services. We also try to develop our branches and facilitate document procedures.