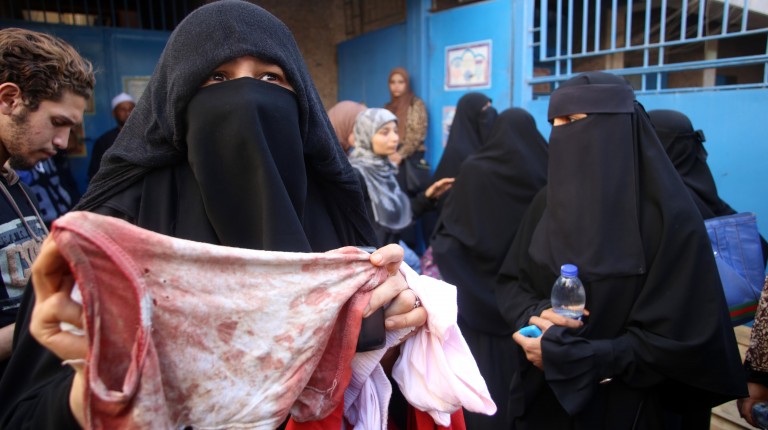 Mohamed Montaser, spokesperson for the banned Muslim Brotherhood, urged Monday the Egyptian people to prepare for a heavy retaliation in response to the latest “Arab Sharkas” cell executions.

Six alleged convicts from the cell were announced to have been executed Sunday morning.

Montaser stressed the need for “retribution”, calling for a revolution that “cuts the heads from the rotten bodies”. He asked the Egyptian people to march in all public squares.

Montaser asserted that no statement or condemnation is enough to denounce the executions. The Monday statement came after many Islamist entities expressed their dissatisfaction from the performance of the Muslim Brotherhood and the pro-Mohamed Morsi coalition, the Anti-Coup Alliance (ACA).

Mohamed Galal, a leading figure in the more radical Salafi Front, held the ACA responsible for the executions, accused the leadership along with Muslim Brotherhood members in Turkey and Qatar.

After the military lead ouster of Islamist president Mohamed Morsi, many Brotherhood members escaped to pro-Brotherhood countries Qatar and Turkey, where they have been vocally opposing President Abdel Fattah Al-Sisi’s regime.

Galal stressed “the incident should not affect so called peacefulness of the revolution”.

As the crackdown against Islamist youth, activists, and students have been increasing, many of the younger generations are demanding a “more radical mobalisation”. Many militant groups targeting security forces and facilities have been emerging, using light weapons and fireworks.

After the executions took place on Sunday, the families of the deceased headed to the Zeinhom morgue to receive the bodies of their relatives.

Some of the families broke down, while others celebrated acknowledging that their dead relatives are martyrs. Dressed in black, female relatives screamed as the bodies were transferred in trucks.

Some of them received the clothes of their dead relatives. According to Egyptian law, the families of convicts who received death sentences are notified one day before the executions take place.

The first hours of Sunday witnessed reports by Egyptian state media that they were executed at the Ministry of Interior’s Prison Authority.

In October 2014, the Supreme Military Court sentenced seven defendants to death, and another two to life. The sessions were held in the military area in the Hikestep military camp on the Ismailia-Cairo road.

They were charged with, according to the military prosecution, killing a military officer in Cairo in March 2014, and murdering another six soldiers in the same month.

They also faced the charge of killing two high ranking officers during clashes with riot police.

Social media users shared graphic pictures of the dead bodies. Afterwards, the different bodies were taken into different areas were tens participated in the funerals.

Al-Sayed’s sister told a pro-Brotherhood channel that she hoped the “killers of my brother will be prosecuted in this life and the afterlife.”

She denied that he might have been a terrorist, adding that he was kidnapped by the authorities before the Arab Sharkas clashes took place. She added that the last time she saw him he was on hunger strike.

After the executions were confirmed by the interior ministry, unconfirmed reports mentioned that the deceased were executed by a fire squad not by hanging. This narrative was adopted by a number of anti-government social media users.

However, the interior ministry denied the rumour, adding they were hanged, as they received death sentences.

The Egyptian criminal law entails that the defendants who receive death sentences must face death by hanging.

Egyptian courts are still looking into a lawsuit demanding the halt of the execution, as the state council court is set to rule Tuesday whether the approval of the military prosecutor of the execution is legal.