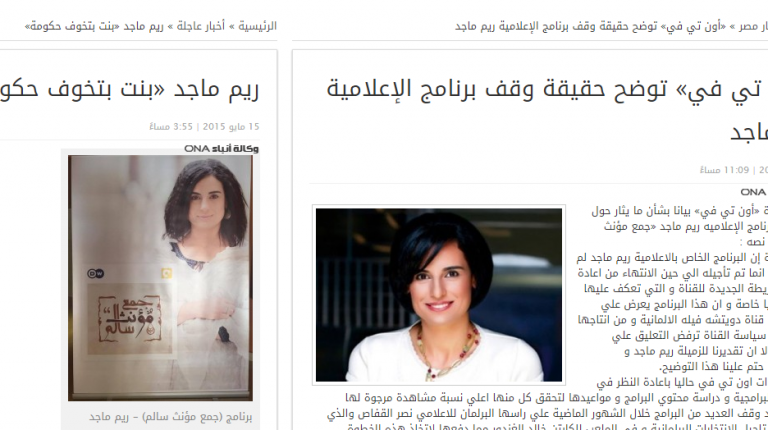 ONtv network is facing a financial crisis which has led to the cancellation of any programme that does not bring in advertisement, said business tycoon and the network’s owner Naguib Sawiris.

Amid controversy in the media sphere regarding the halt of TV presenter Reem Maged’s programme this week,  Sawiris rebutted Maged’s claims by stating she was “obsessed” with “sovereign security institutions”.

“They are innocent from this accusation,” Sawiris added.

Nonetheless, his declaration contradicts those of the network a day earlier, which later switched positions, through two opposing articles on the network’s affiliated news website ONA.

ONA published an article on 15 May entitled “Reem Maged, the girl who scares off the government”. The article quoted unnamed sources inside the channel saying they were “highly pressured” by senior security institutions to stop the show. It also said the “source” was shocked because the show was not political.

“Obviously, the channel did not take the decision completely on its own,” Maged said in a phone interview with colleague at the same channel, TV presenter Liliane Daoud, implying external pressure.

She stated reasons were unclear regarding the programme’s content, and denied she had been directly contacted by a “senior sovereign body”, but that she had been informed about that officially by the channel.

Sawiris’ statements to the newspaper Al-Masry Al-Youm, Saturday came in response to Maged, after her programme “Gama’a Moanath Salem” was stopped. The show is produced in partnership with German Deutsche Welle, which continues to air the programme.

However, Sawiris dismissed the allegations, saying “her show did not get a single ad”. The business tycoon carried on explaining that the channel was currently reconsidering its policies as it has been suffering financial losses.

Likewise, ONA published another article in the evening of the same day, challenging Maged, itself and its owner. The article titled “clarification”, said that Maged’s show was not cancelled but “postponed” because the network was adopting a new strategy.

“With all due respect to our dear colleague, the network will not respond to her rumours,” ONA’s article read. It added that the network was going to coordinate with DW about the best way and timing to air the show.

Maged, however, has not let the issue go easily, as she posted to her official Facebook account a reply to the channel’s statement. In the post, she pondered how the channel concluded the deal with DW without previously reviewing its “strategy”, and how it promoted the programme and officially announced its launch.

Maged is also a political advocate who took part in the “No to military trials” protest in front of the Shura Council in 2013. Earlier, she was accused of the judiciary on her show in 2012. She was also summoned by military prosecution, for previewing alleged military violence towards activists in 2011.