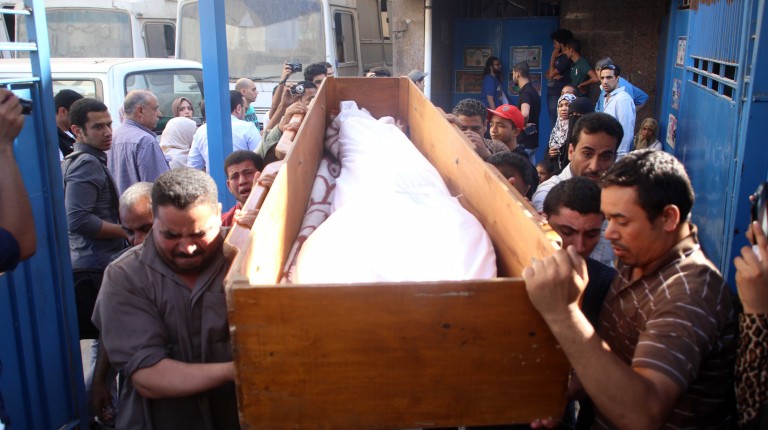 The International Commission of Jurists (ICJ) condemned on Monday the “egregious human rights violations” of Egyptian authorities, including “the right to life.”

The statement was made in reference to Egypt’s execution of six young men on Sunday, “following their conviction in an unfair trial by a military court”.

Meanwhile, the Egyptian administrative judiciary postponed to 2 June an examination of a lawsuit that demanded the halt of the executions and are yet to decide on whether the execution was legal.

According to the ICJ, the military proceedings in the “Arab Sharkas” case in which these young men were executed, violated their right to a fair trial by “a competent, independent and impartial tribunal”.

Egypt’s criminal law requires that those who receive death sentences are hanged.

“Rights of defence were undermined, including the ability to have confidential access to a lawyer,” while all of the accused alleged that they had been subjected to ill-treatment and torture while detained.

Additionally, according to previous statements to Daily News Egypt, families of the executed said that two of the defendants were arrested three days before the alleged “Arab Sharkas” confrontation took place, while two others had already been detained for three months.

“Rather than contributing to serious human rights violations, Egyptian judges should preserve the dignity of their office and act in defence of the rule of law and human rights, not as a tool of repression,” Said Benarbia, the Director of the ICJ Middle East and North Africa programme said.

The ICJ added that it opposes the death penalty under any circumstances as a violation of the right to life while the African Commission on Human and People’s Rights called on Egypt to “refrain” from carrying out the death penalty.

Other local groups, including an Anti-death penalty group, has previously called for a halt to these executions and has met with the state-backed National Council for Human Rights in attempts to put an end to executions.

The UN General Assembly has repeatedly called for a moratorium on the use of capital punishment.