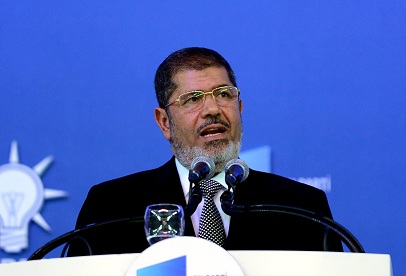 Hundreds of protesters have continued their demonstrations in several Turkish cities against the death sentence issued against ousted president Mohamed Morsi and other Muslim Brotherhood members on Saturday.

Protesters in Istanbul started carrying photos of Morsi and the Rabaa sign outside the Egyptian embassy, but then expanded to many other parts of the city.

“The protest was relatively small and well behaved, and since it is an anti-Sisi rally in line with government it is unlikely there would be trouble,” John W, an Istanbul-based photojournalist told Daily News Egypt.

“Protests are common in Turkey and rarely disrupt things unless very big rally and anti-government,” he added. “There are often small pro-Muslim Brotherhood protests around the city but always very low key events.”

Following the ouster of Muslim Brotherhood regime in 2013, Turkey has been a strong opponent of the Egyptian regime, continuously referring to it as a “military coup”. Yet, a leftist Turkish politician and head of Al-Watan Party, Yunis Suner, had a different perspective towards the verdict.

He told state-run news agency MENA reporter in Ankara: “Morsi’s case is a totally Egyptian matter, and we do not think we should comment on any of the Egyptian courts decisions otherwise it will be a violation to the Egyptian sovereignty.”

In the US, White House spokesperson Jeff Rakhte said: “We are deeply concerned by yet another mass death sentence handed down by an Egyptian court to more than 100 defendants, including former president Morsi.”

“This practice, which in this instance was directed against, among others, a former elected president, is unjust and undermines confidence in the rule of law,” he said.

The negative reactions also extended to supporters of the current Egyptian regime. The UK and Germany added to the growing list of international condemnations towards the Muslim Brotherhood verdict.

Chancellor Angela Merkel’s spokesman, Steffen Seibert, said at a press conference in Berlin on Monday:  “There were “doubts” over the fairness of the trial. The German government opposes the death penalty in principle, under all circumstances.”

A statement issued Sunday by British Minister of State for the Middle East Tobias Ellwood said: “We look to the Egyptian authorities to apply the rule of law consistently in line with international standards and to protect the political and legal rights of all Egyptians as the basis for the country’s future stability.”