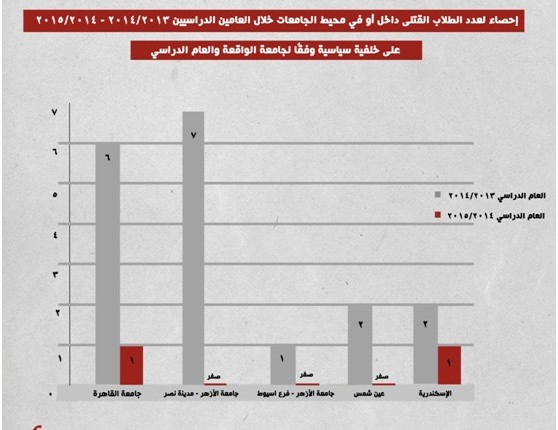 Twenty students have died due to violence on campuses across Egypt since the beginning of the 2013 academic year, according to research by the Association for Freedom of Thought and Expression (AFTE).

The AFTE report was published after the death of 21-year-old Anas El-Mahdy on Saturday.

El-Mahdy died as a result of a brain haemorrhage sustained during clashes between security officers at Cairo University and students on 19 April. The students had been calling for the release of their colleagues detained on protesting-related charges. The protesters were believed to mainly be members of the Students Against the Coup (SAC) movement.

Footage of the clashes shows violent scenes, with un-uniformed men with weapons, including electric batons and knives, fighting alongside the campus security, and severely beating students. Many public universities across Egypt have employed Falcon private security firm to police its campus.

Anas El-Mahdy was transferred to Qasr Al-Eini emergency hospital, and remained in a coma for27 days until his death.

According to AFTE’s research, El-Mahdy is the 20th student to die as a result of on-campus violence. He is, however, the first during this and the previous academic to die at the hands of university administrative security, with the rest attributed to police actions.

The research documents the names and incidents of the 20 deaths, beginning with sixth-year Al-Azhar University medical student Abdul Ghani Mahmoud, who died 20 November 2013 by shotgun wounds to the face. His death occurred following a police raid on the campus to disperse a demonstration. According to AFTE, police responded by arresting 16 students on charges of being responsible for Mahmoud’s death.

The majority of deaths occurred at Cairo and Al-Azhar universities, where seven have died at each, three died at Alexandria University, two at Ain Shams, and one at the Al-Azhar’s campus in Assiut.

Since the beginning of 25 January Revolution, no police officer has been held accountable for deaths and injury suffered in student related incidents where they are implicated as responsible.