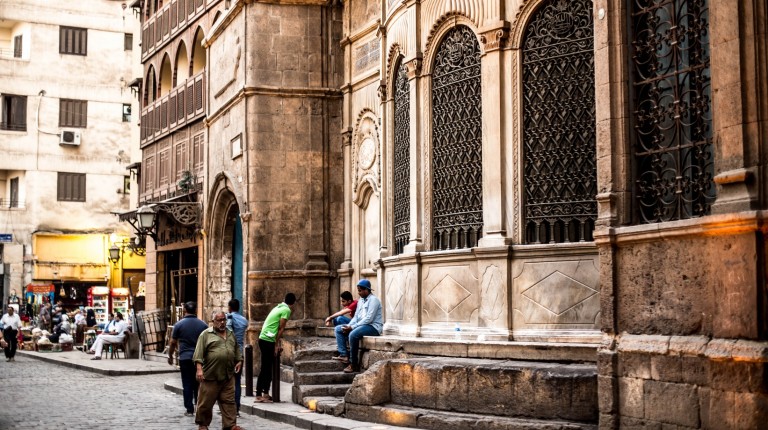 Moez Street has been considered the backbone of Cairo since the city was first build, and one of the most significant touristic markets in Egypt, where tourists can find Egyptianhandicrafts, jewellery and souvenirs. Due to the decline in tourist flow, many store-owners complain of a huge decrease in sales.

With 29 of the historical city’s most important monuments lined up across its length, the Moez Street monuments are characterised by their variety, beauty, architectural accuracy and magnitude, as well as the unique Islamic decoration.

The structures do not only include enormous mosque, but also schools, cemeteries, palaces and hospitals. Many of those monuments go all the way back from the Fatimid era in the 10th century until Mohamed Ali’s monarchy in 19th century, passing through the Ayyubid, Mamluk and Ottoman empires, representing the soul of Egypt and the architecture art over all these years.

Since the 25 January Revolution, tourism has significantly decreased. “Before 2011, [there were] about 200 tourist buses per day; currently we never see busses or big groups of tourists,” said Eslam Sousha, an owner of a silver and copper handicrafts store in the street.

“After the presidency of Abdel Fattah Al-Sisi, the situation has improved and tourists started to come to Egypt again. Several months ago we witnessed the coming of Arab tourists which usually come late in summer but two weeks ago after the consecutive trials, all tourists disappeared and the sales has totally stopped”

Egyptian copper handicrafts are some of the most distinct worldwide. “Tourists were amazed that we still make handcrafts; even if they did not buy, they would just stop and [show their appreciation] for the work,” Shousha added.

Handcrafted engraved copper trays prices vary from EGP 35 for the smallest piece to EGP 1,500 for a tray of one metre length. As for silver handcrafted jewellery, the prices currently vary from EGP 9 to EGP 15 per gram for Egyptian silver, EGP 20 for Turkish silver and EGP 25 for Italian silver.

As for the craftsmen’s living conditions, with the decline in tourist flow, Shousha said that they are lucky, as they are a big store that has been in business since the 1920s, and they export their work to many Arab countries, such as the UAE and Kuwait.

Whereas, on the other hand, for small stores that are rented at approximately EGP 5,000, sometimes leasers cannot even meet their rents or the daily workers’ payments, and they find themselves forced to fire some workers.

Furthermore, despite the designation of Moez Street as a pedestrian zone, cars still enter. “The cars are mostly police cars or trucks with authorisation to be here. The real problem is the motorcycles; they are numerous and drive rapidly, scaring the pedestrians. They need to be supervised by the police,” Sousha noted.

The number of craftsmen is decreasing due to the drop in sales and the decline of tourist flow. Store owners have had to branch out their activities, such as Moez Silvers store, which has initiated a school for teaching the art of engraving on copper for students and amateurs. A three-month course ranges from EGP 400 to EGP 700.

Meanwhile, another school, with free courses, was initiated by the Ministry of Culture for low-income youth needing a job.

“We also take the work from the students of our school and display it at the store, selling it and giving back 25% of the profit,” Shousha said.

As for Mohamed Al-Amin silver jewellery store, they mostly depend on wholesales to other stores. “Six or seven years ago, the selling process was a lot better than nowadays. Here in the store, we’ve stopped waiting for tourists,” said Ayman Youssef, a salesman in the store.

“The tourists coming nowadays spend about $2,000 for the whole trip, not wanting to spend more money, and bargaining with the prices,” the salesman added.