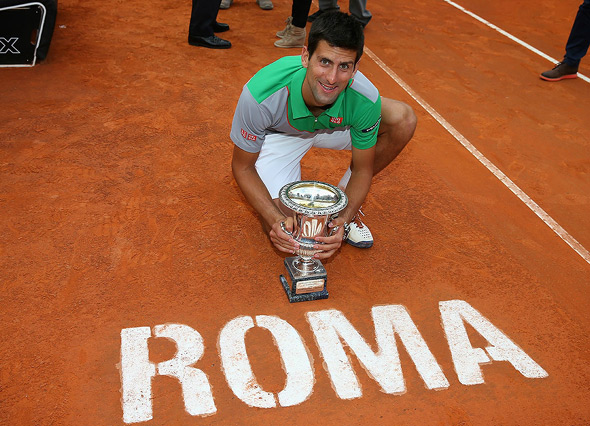 World number one Novak Djokovic snapped the title of the Internazionali BNL d’Italia tennis tournament from world number two, Swiss Roger Federer, with 6-4 and 6-3 in their final game. The victory gave Djokovic his fourth title, after acquiring it in 2008, 2011, and 2014.

The victory boosted Djokovic’s opportunities to top the rank of professional tennis players by adding 1,000 points to his name, reaching 14,845 points. This is Djokovic’s fifth title this year among the ATP World Tour competitions.

Djokovic made his way to the title by defeating Spanish Nicolas Almagro by 6-1, 6-7 and 6-3 in the second round. After that, he achieved his second victory in the championship when he won against Brazilian Thomaz Bellucci with 5-7, 6-2 and 6-3. In the quarter final match, he defeated Japanese Kei Nishikori with scores of 6-3, 3-6 and 6-1. Moreover, Djokovic passed the semi final round by winning against world number eight player, Spanish David Ferrer, with points of 6-4 and 6-4.

Russian player Maria Sharapova, world number three, acquired her second title this year after having been crowned title of Brisbane International Championship in Australia. She ranked third in the Italy Open Championship between 2011 and 2012 after defeating the Spanish Carla Suárez Navarro, world number 10, with scores of 4-6, 7-5 and 6-1.

Sharapova began her victories in the championship by a game against the Australian Jarmila Gajdošová, in which she won with scores of 6-2, 3-1. After that, she made her second win against the Serbian player Bojana Jovanovski, with 6-3, 6-3. In the quarter finals, Sharapova beat her competitor, Belarusian Victoria Azarenka, with 6-3, 6-2. In the semi final round game, she won against Russian Daria Gavrilova with 7-5, 6-3.

As for the men’s doubles competitions, the title went to Uruguay’s player, Pablo Cuevas, and his mate, Spanish David Marrero, when they defeated the Spanish duo, Marcel Granollers and Marc Lopez with scores of 6-4, 7-5.

The duo of Hungarian Timea Babos and French Kristina Mladenovic crowned the women’s doubles title in the Internazionali BNL d’Italia after defeating the Swiss Martina Hingis and her Indian mate, Sania Mirza, with the score of 6-4, 6-3 in the final.