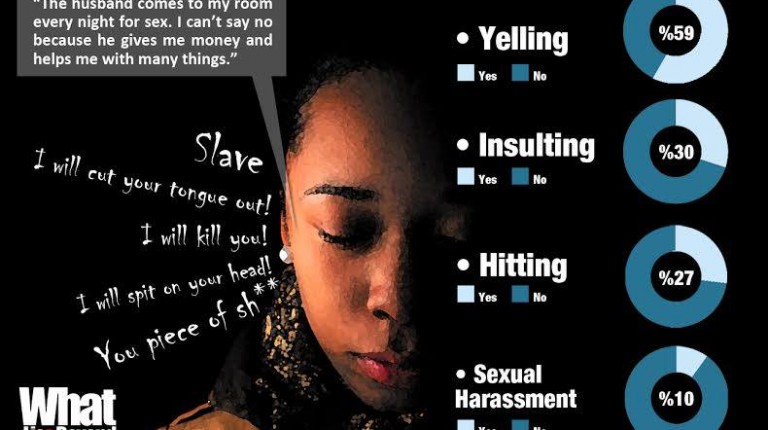 Due to its geographic location, Egypt is home to thousands of African refugees who came to seek better life conditions. There are 12,600 Somalis, 30,000 Sudanese, and 5,800 Ethiopians refugees, according to UNHCR estimates in 2015.

Fleeing from their home countries’ dire life conditions, ranging from famines, and an unstable security situation, to human rights and political abuses, African refugees land in Egypt to seek employment, improve their financial and life conditions, but often fail to achieve this goal, and instead stumble upon a harsher reality.

The Centre for Migration and Refugee Studies discovered in 2007 that 59% of foreign domestic workers in Cairo are exposed to verbal abuse by their employing families, with 30% are being insulted, 27% are being physically abused, and 10% exposed to sexual harassment, attempted rape and gang rape.

Saadah, a Ugandan woman who came along with her sister Joy in February 2014, was sent to a house in Makram Ebeid Street in Nasr City to work as a cleaner, but gradually she became a dog -sitter.

‘’The house owner treats the dog a hundred times better than me, the dog has a house to sleep in, while I sleep on the balcony’s ground. She can wake me up any time to look after her dog, and if she felt that the dog is unhappy, I immediately get punished,’’ she said.

Food is always the easiest way to punish a domestic worker, according to the families. Some house owners take pride in depriving their helpers from food whenever they do something wrong.

Sophie, 25, said when she did not wash the laundry properly, the house owners left her all day long “without a single meal”.

The abuses that African domestic workers are exposed to are not limited to those committed by the employing families, but also by random people on the street.

Khadra, 40, is a Somali single woman, and has been working as a domestic worker for 10 years in Egypt. She said: “Wherever I go, people always insult me and call me names that refer to me as bad woman.”

Women in their mid-twenties and thirties are the most common age groups for people who hire foreign maids and nannies rather than Egyptian ones, despite their higher financial cost. Working mothers usually hire them to help them in balancing house chores and work commitments.

But some mothers place rules for African workers particularly, such as preventing them from touching or kissing the kids, and avoid leaving the children alone with the helper, using surveillance cameras to observe them.

On the other hand, some Egyptian families believe that having a foreign maid who speaks English is a sign of superior social status.

“While driving, my baby should sit on my legs, and this is illegal and could harm us both. That’s why I needed a helper to sit beside me and carry the baby,’’ said Mona Shaheen, head of training and consultation at the German Goethe Institute in Cairo.

Yet, she had a hard time selecting the most convenient helper. “I changed more than 10 workers, after facing problems with their work, attitude and behaviour,” she said.

Shaheen further explains: “I always put rules for the helper not to touch or kiss my baby for my baby’s safety. But one day when they were with me at work, the helper kept kissing the baby in front of everyone on her mouth, despite my warning to her against doing this.”

Nizar El-Karim, Outreach Officer at the Cairo-based multi-cultural Tadamon refugee centre, said: “The cases we receive are either exposed to racial discrimination, sexual harassment inside homes, or lost parts of their bodies.”

“Through our multiple offices in Cairo, we do our best to increase community dialogue between them and others by providing rehabilitation service,” he added.

According to El-Karim, the UNHCR allocated fixed salaries for refugees in Egypt, in which individuals receive from EGP 400 to EGP 600, and families of four to six members receive EGP 1,000. The centre also helps employ African refugees and foreigners to work as teachers and employees.

“I support them with sedative medications and psychotherapy sessions, but still it is not enough,” Raghda Seleit, a psychiatrist at the El Nadeem Centre for Rehabilitation of Victims of Violence, specialising in providing care and services to Egyptians as well as refugees.

She added that many of the Africans she works with suffer from “what we call post-traumatic stress disorder (PTSD) or anxiety. Therefore, they are not psychologically qualified to deal with the obstacles they are facing in Egyptian society. Most of the cases are had already experienced different tragedies and traumatic experiences in their home countries; at least one of their family members was tortured, killed or raped in front of her eyes, if she had not [experienced] this first hand.”

As a psychiatrist concerned with her patients’ psychological well-being, Seleit said: “I advise them to leave their work, since a recovering PTSD patient requires a safe environment, but this would be inapplicable since their life will totally deteriorate without any income.”

According to Egyptian labour law, non-Egyptians are not allowed to work as employees in any Egyptian companies or intuitions. Therefore, they resort to working in houses as cleaners and babysitters, where they are paid negligible salaries.

Malek Adly, Director of the Lawyers’ Network at the Egyptian Centre for Economic and Social Rights (ESCESR) said: “The point is in Egypt we are not totally committed to the 1951 refugee convention policies.”

“On the other hand, the government rejected many of the projects that included support services for refugees; these projects were offered from external and internal sources,” he added.

According to Adly, in police stations, refugees are not considered part of society, and therefore do not have the right to complain about anything.

“When anyone of the refugees tries to show their UN asylum card to the police, they ask them to go to the UNHCR and report, since it’s responsible for refugees’ affairs,” he said. On the other hand, he noted that policemen often verbally assault and physically abuse Africans refugees of both genders.

Meanwhile, Adly suggested that the Egyptian law should be more committed to the agreements held between Egypt and African countries regarding the affairs of African in Egypt. To improve African domestic workers’ conditions in Egypt, we should issue a law that grants them their rights and safeguards them from any inhuman abuse, he said.

When asked what she felt she might take away from her experience if she had an opportunity to leave Egypt, Sophie said: “Nothing at all. Not from the country or the people.”