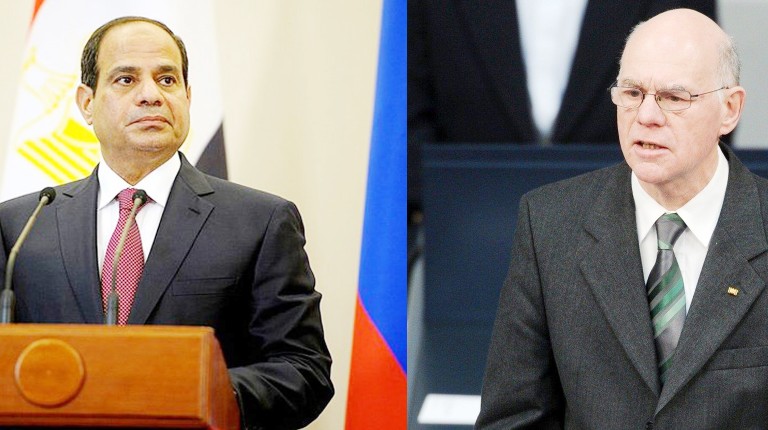 After Bundestag President Norbert Lammert cancelled his meeting with Al-Sisi over Egypt’s human rights situation, Egypt’s Foreign Ministry said “for its great importance to Egyptian-German relations”, the visit will take place as scheduled in June.

“[Al-Sisi] is head of state. This is an insult”, Yousry commented Saturday, denouncing the visit.

A spokesperson at the Federal Press Office in Berlin had declared that there have been no changes to Chancellor Angela Merkel’s invitation to Al-Sisi.

However, vice president of the National Movement Party, Yehia Qadry, believes it is in Egypt’s favour “to face its enemies on their turf”.

It is no secret that Germany had become hostile, or at least biased, against Egypt when former president Mohamed Morsi was ousted following mass protests on 30 June 2013, Qadry said.

“Germany hosts organisations in collaboration with the banned Muslim Brotherhood, which Egypt has condemned,” Qadry added, saying that the Brotherhood has “infiltrated” European and American media.

Egypt is in the “normalisation” phase of its relations with Germany and other countries, which have taken the same stance when Al-Sisi came to power, and Lammert’s actions are expected, Qadry said. “We have to resolve issues, not take hostile stances. Politics does not indulge enmity.”

Egypt’s Ambassador to Germany Mohamed Hegazy stated Tuesday that “the Egyptian side [of Al-Sisi’s visit] did not request or seek a meeting for the [Budestag] President with him; it was rather the German side that had included the meeting in the programme they had prepared for the visit”.

In a statement issued by the German Parliament on Tuesday, Lammert criticised the current political situation in Egypt.

“Despite expectations from Egypt to schedule a date for the long-awaited parliamentary elections, what we are witnessing in recent months is systematic persecution of opposition groups, mass arrests, convictions to lengthy prison terms and an incredible number of death sentences, which include former parliament speaker [Saad] Al-Katatni,” Lammert said.

Egypt is trying to show Germany the reality of the situation, and of what Al-Sisi is doing, Qadry declared.

The State Information Service (SIS) said Friday that the Bundestrag’s statements indicate a lack of knowledge of Egypt’s court proceedings and the nature of Egypt’s constitution and laws.

On the other hand, Yousry said: “Egypt’s reputation is now in the gutter because of its politicised judiciary and that judiciary’s rulings’ and as such the European Parliament disagrees with what is happening in Egypt.”

Merkel and the Bundestag may be in disagreement, but their democracy allows that, Yousry said. The former Foreign Ministry official believes that countries that maintain relations with Egypt are targeting their own national interests, “not because Egypt is a great country”.

In March, Germany’s ambassador to Cairo, Hansjörg Haber, emphasised that Al-Sisi’s visit, which was supposed to take place following Egypt’s parliamentary elections, would have been more “prestigious” had it occurred after the completion of the democratic road map. However, there are few conditions on the visit, the ambassador added.

Egypt has a powerful foreign ministry that would stop the visit if it were to cause embarrassment to the country, Qadry stated.