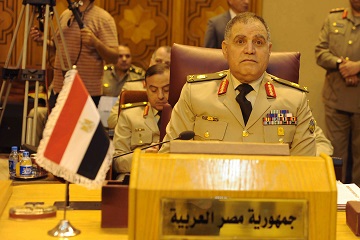 Cairo hosted the second meeting of Arab army chiefs of staff of Saturday, where it was emphasised that the Joint Arab Forces must be assembled by 29 July.

Chief of Staff of the Egyptian armed forces Mahmoud Hegazy stressed the importance of meeting the deadline set during the 26th Arab League summit held in Sharm El-Sheikh last March.

He explained that the establishment of the force was entrusted to the Chiefs of Staff, who will later present a report to the head of the summit for a month’s review.

Nabil El-Araby, Secretary General of the Arab League, called on support for the idea at a meeting of the league’s foreign ministers earlier in March, and announced it will reappear on the agenda of the second-most important conference of notable visitors to the shores of Sharm El-Sheikh this month. He told the recent league summit, “we’re in deep need to create a joint Arab defence force” to “fight terrorism” as well as “help in peace missions and civilian protection”.

Former brigadier general of the Egyptian military Khalid Okasha believes that the step is both positive and feasible. “We would not need foreign intervention to resolve issues. It is an all-Arab notion helping other Arab countries asking for security and military aid,” Okasha stated.

The Joint Arab Forces initiative is also a good path for Arab cooperation, Okasha said. “Nothing would be left for assumptions or chaos. The forces would work under the specific laws and procedures of the Arab League,” he stated.

“There are no obstacles whenever there is a political will, and a charter has been assembled at the last Arab League summit,” Okasha added.

He added that the one obstacle of getting all countries to agree on the forces was resolved by setting a minimum of only seven countries required to join, a target achieved “from the very first minute”. There is flexibility for other countries to join later on, when the forces are assembled and crystallised, Okasha explained. He said that Qatar was among the first seven countries on board.

“The Joint Arab Forces will give the issue of Arab national security a serious standing,” Okasha declared.