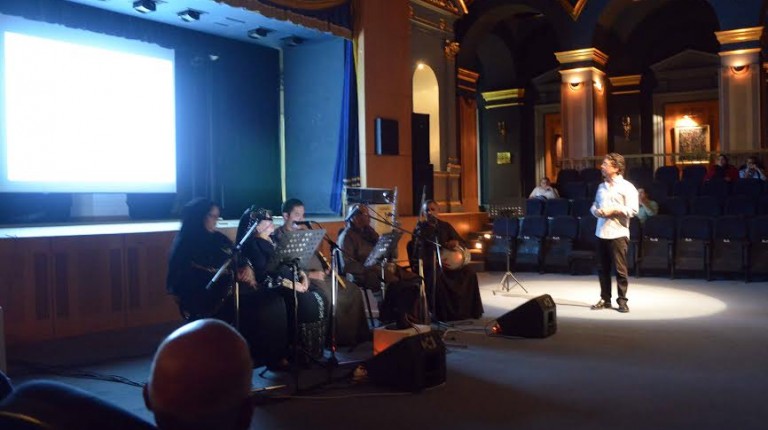 Going for a walk in the streets of old Alexandria, where the outstanding Greek architecture dominates the buildings, cafes and restaurants is a remarkable experience that will take you on a journey back in time, when beauty was cultivated inside people’s hearts, souls and minds. Over the centuries, Alexandria has always been Egypt’s capital of civilisation and culture, and Alexandrians were always known for their unique taste in arts, especially music and theatre.

Believing that Alexandria must remain Egypt’s cultural capital, a number of young people who are interested in developing and promoting the artistic and cultural industries dedicated their time and effort to launching various initiatives and projects aiming to enhance and reinforce the cultural scene in the coastal city.

One of the initiatives that achieved remarkable success over the last few years is “Alex Agenda”, a magazine that serves mainly as a channel for connecting Alexandrian citizens with the various cultural and artistic movements and initiatives that take place around them every day, aiming to encourage them take part in such projects on regular basis.

“Officially, Alex Agenda is defined as a magazine, but it is not! It’s a whole living body that breathes and feels,” says Ahmed Essmat, the founder of Alex Agenda. “It is the first local bi-lingual directory in Alexandria, aiming at interacting with the society and delivering a huge amount of information about what’s going on in Alexandria, with a special attention to youth initiatives, social media and entrepreneurship.”

Alex Agenda is a youth project that’s fully managed by 14 young Alexandrians who plan and try to provide a full monthly programme for every single event in the city to their readers.

“Alex Agenda is more like documentation for all the artistic and cultural events that take place in Alexandria every month. It’s non-commercial and it’s distributed to most of the popular cafes and hotels for free,” says Manar Habashy, a writer and editor in the magazine. “Since it was launched in August 2006, the project attracted the attention of hundreds of Alexandrian citizens who are interested in the artistic and cultural fields. Therefore, we’re always keen to communicate with our readers through social media and support their initiatives and new projects.”

Aside from linking people with the cultural initiatives, Alex Agenda played an important role in connecting ordinary citizens with governmental officials, conveying their voices and complaints. “A few months ago, we launched a successful campaign on our Facebook page called ‘What do you want from the Alexandrian governor?’ and we got a lot of complaints from the readers about issues relevant to preserving the cultural heritage or cleaning the streets that were sent to Hany El-Messery, the new governor. Then, we published his answers in the following issue,” she noted.

From Habashy’s point of view, it is really important for cultural workers to move away from the centralisation in Cairo and start launching cultural projects and initiatives in other governorates, including Alexandria. “Our team is currently working on other cultural projects that will be spread to other cities and governorates all over Egypt, but we prefer to keep it secret for now,” she noted.

Under the title “Support to Cultural Diversity and Creativity in Egypt”, another successful initiative is adopted by the Bibliotheca Alexandria programme and co-funded by the European Union. The project seeks to map and consolidate the existing cultural operators all over Egypt. It seeks to provide them with the requested tools to boost their activities and facilitate their national, regional, and international exposure.

According to the initiative’s website, a team of researchers will explore all 27 Egyptian governorates for existing cultural industries and categorise them according to their field of work. This is done through contacting and visiting the local authorities, the central cultural organisations, the NGOs and the local associations in the different governorates.

“The programme aims mainly to reinforce grounds for the development of the cultural sector in Egypt, including an increased access to culture, the promotion and protection of the diversity of cultural expressions, following the UNESCO 2005 Convention,” says Essmat, the programme’s training consultant.

The programme also provides workers in cultural fields from all over Egypt with an interactive training methodology, which is implemented through lectures, workshops, debates and practical training.

Meanwhile, “Markaz Horeyet El-Ebdaa” or the “Freedom ofCreativity Centre” is another important initiative that plays a major role in adopting the youth’s cultural and artistic experiences in different fields, including cinema, ballet, theatre, fine arts, music and drawing.

The centre provides youth initiatives covering training sessions and studios for their rehearsals, in addition to holding annual festivals honouring them and choosing the best performances and artistic works. The centre is affiliated with the Ministry of Culture.

“The centre was originally established in 2001, but it was restricted to certain kinds of arts because its former board believed that classy art genres have their own audience and shouldn’t be available to all people,” said Waleed Qanoosh, the current chairman of the centre. “The centre was revived in 2011, with a new administration and new vision, although we encounter some problems due to the lack of budget and financial support.”

In addition to adopting young initiatives, the centre aims also at conveying the different kinds of arts to ordinary citizens through organising attractive activities for free. It also organises some important annual events, including the annual Alexandrian theatre festival for independent troupes and another annual festival for short films, and it also provides poetry and cinema workshops for children regularly.

“It’s really important to involve the charities and NGOs in our work, and that’s why we’re so keen to raise the youth’s cultural and political awareness and replace the absence of the role of the cultural palaces in Alex,” Qanoosh added.

Moreover, Essmat believes that Egypt has a rich cultural landscape nowadays. “We have a lot in the Egyptian culture scene, but Egypt still has tons of hidden treasures and young talents that need to be well promoted,” he said.

However, he thinks that the scene suffers from the lack of good managerial practices. “A country like Egypt must have a unique cultural strategy, just like England, where cultural events are a main source of income for the country.”

Also, he believes that the Egyptian cultural scene needs more independent individuals, NGOs and companies to enter the market to provide more services.

“Culture and arts are Egypt’s soft power that we have to invest in and support if we really seek development,” he asserted.