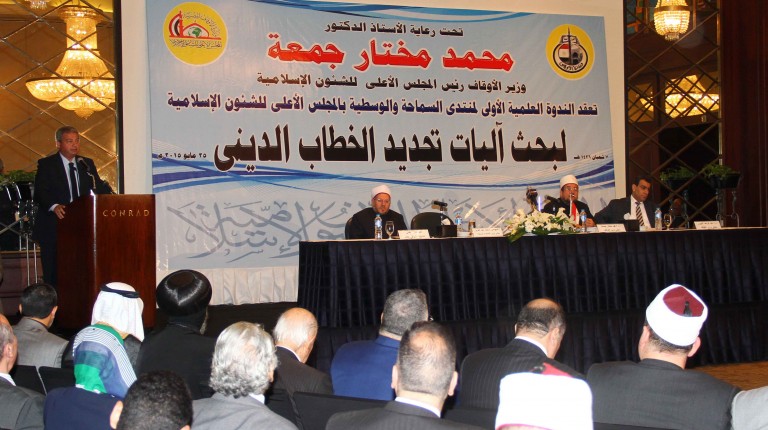 Through organising two general sessions and a workshop, the ministry aims through this forum to research and discuss new tools for spreading religious speeches in Egypt. It is part of many steps it has undertaken over the past two years to counter “extreme Islamists”.

“The religious edicts [fatwa] change from one era to another. Our role as religious scholars is to update those edicts to be compatible with the era we are living,” said Religious Endowments Minister Mohamed Mokhtar Gomaa.

“Youth nowadays do not like the way we discuss religious subjects, it is like a boring lecture to them,” Abdel-Aziz said. “If we want to reach out for them we need to use the same modern tools of communication they use.”

On the other side, Al-Nabawy said he believes the cultural and religious discourse are similar and spread through similar tools. “The ministry will launch a new contest in the holy month of Ramadan for intellectuals to author topics about ways of updating religious speech,” he said.

The Ministry of Religious Endowments filed two reports earlier in May against two preachers in two different mosques in the Giza governorate, using its right of civil arrest for the first time. The preachers were taken to task for holding neither an Al-Azhar degree, nor having permission to provide religious speeches.

The reports are the first to be filed since last October’s decision by the Ministry of Justice, which approved the Ministry of Religious Endowments  to grant the first batch of endowments inspectors the right to arrest any civilian who violates religious speech law and regulations inside mosques.

“I would rather call it an act of discipline rather than control,” religious scholar Khalid Al-Gendy told Daily News Egypt, commenting on the civil arrests, during the religious discourse forum. He added: “There is no value for any nation without discipline. It is a normal regulation to eliminate the spread of strife and extreme.”

Meanwhile, the Ministry of Religious Endowments decided to form anti-atheism awareness groups inside mosques across Egypt.

Former Al-Azhar University President Ahmed Omar Hashim told Daily News Egypt on Monday “atheism is divagation from realities. It should not have appeared in an era that we label as an era of enlightenment.”

“This forum will respond to those groups and also to extremists who deviate from all kinds of religious legislations, through putting forth a modern religious approach,” he added.