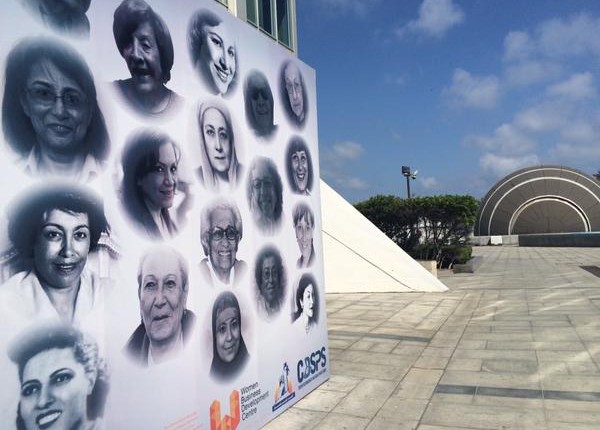 Whether dead, fugitives, or imprisoned, Rwanda’s 1994 genocide took its toll mostly on men. 800,000 people were murdered, and  one million fled the country, according to the United Nations. 250,000 women and girls were raped, but it was up to those many war widows and other single women to bring about reconciliation.  They assumed duties traditionally carried out in patriarchal Rwanda by men. It was the women who rebuilt a country from ashes .

“Women put gender equality theory in action and it worked,” Rwandan Justine Mbabazi said at the Egyptian Women Empowerment Conference, held from 13 to 16 May. The international legal practitioner, who participated in drafting the Afghani and South African constitutions, declared that they “didn’t see women empowerment as a taboo”, and by doing so she set an example to be followed by Egypt.

Women from all corners of Egypt, and the world, gathered in Alexandria to conclude the Egyptian Women Empowerment project.

“It is not a novelty to be talking about women’s empowerment in the African continent,” Public Protector of South Africa Thulisile Madonsela said, pointing to the need to bridge the gap between policy and implementation. “When you constrain any member of a community, you are not depriving the person’s human development but depriving the whole community from reaching its full potential.”

“We need to move along the lines dictated by the constitution and laws,” Madonsela said.

The Egyptian Women Empowerment project began in 2012, with the aim of supporting and enhancing the women of Egypt in political participation, and empowering them in decision-making circles. Organisations affiliated to the project are PeaceWomen Across the Globe, UN Women, Egypt’s National Council for Women, and Bibliotheca Alexandrina’s Center for Democracy and Social Peace Studies.  A committee of prominent women was assembled, including Tanya Mirabelle from PeaceWomen Across the Globeand journalist Shahira Amin.

The first phase of the project was composed of a series of dialogues throughout the government to discuss the challenges and solutions facing women’s empowerment. It included four geographical areas: urban areas in 2012, Upper Egypt in 2014, the Delta area in 2014, and desert and Bedouins areas in 2014, to be concluded by the May 2015 Alexandria conference.

The Women Empowerment Conference ended phase one and launched phase two by reviewing the recommendations set throughout the past three years to present a national strategy of a credible and concrete plan.

“Empowering women is empowering humanity,” the head of UN Women in Egypt said at the conference.

International covenants and the 2014 constitution

Article 11 of the constitution obliges the state to achieve gender equality regarding civilian, political, economic, social and cultural rights. It also urges the state to take the necessary measures to ensure women’s fair representation in parliament and calls for an end to discriminating against women. The article obliges the state to protect women against all forms of violence and to provide mothers and children with adequate care.

The article further states: “The state shall also guarantee women’s right to holding public and senior management offices in the state and their appointment in judicial bodies and authorities without discrimination. The state shall protect women against all forms of violence and ensure enabling women to strike a balance between family duties and work requirements.”

Further, children’s rights are set clearly in Article 80, stating: “Anyone under the age of 18 is considered be a child”, in accordance with international conventions and with the Egyptian law. Therefore child marriage is prohibited not only by law, but by the constitution.

Moreover, a woman’s right to pass citizenship to her children is guaranteed by Article 6 of the Egyptian constitution, which stipulates that “citizenship is the right of any child born to an Egyptian father or an Egyptian mother”.

Article 93 of the constitution stipulates that “the state shall commit to international agreements, conventions, and charters that Egypt ratifies, and they shall have the power of law after their publication, according to set situations”.

In 1981, Egypt joined in the 1952 Convention on the Political Rights of Women, the Convention on the Elimination of All Forms of Discrimination against Women (CEDAW), and the 1966 International Covenant on Economic, Social and Cultural Rights.

Egypt also participated in the 1995 Fourth World Conference on Women in Beijing, which is considered a milestone for worldwide women empowerment. Former first lady Suzanne Mubarak had stated that “we still have a very long way to go”. Twenty years later, Egypt still has a long way to go.

In the 2014 Gender Gap Index, Egypt ranked 129 out of 142 countries. It ranked even lower on the political empowerment scale, coming in the 134th position. Women in ministerial, legislative, and senior positions numbered at only 10 for every 90 males.

Although the new constitution assigned a quota of “one quarter of the seats”for women in the elected local councils, no quota for the parliament was indicated. Article 11 states: “The state shall seek to take necessary measures to guarantee adequate women’s representation in parliamentary bodies, along the lines identified by the law.”

Chairwoman of the National Council of Women Mervat Al-Tallawy said that she is “not happy with political parties”. They should get their acts together regarding women’s rights, she stated.

President and initiator ofPeaceWomen Across the Globe Ruth Gaby believes that “often men do not like to share power. Women are usually found on the 12th or 15th position in parliament lists”.

“Women belong in parliaments and governments, there is no question about that,” Gaby stated.

When it comes to parliaments, women empowerment is not merely about quotas, but about the equality of women, Madonsela believes. “Similarly, men should not be put in power without knowledge and science,” she said.

Agreeing, Mbabazi stated that “it is not about number of women in parliament, but transformative action they achieve that can improve citizens’ lives”.

Mbabazi said that Rwanda has 0% corruption because most leadership positions are given to women. Women also audit and monitor the government, and the political will that allows change to happen is present. “You don’t need to love one another to work together, only respect is needed,” she said.

“Government is not versus women rights. Women are needed in the police for sensitive cases such as rape, for example, and women judges are needed for certain cases,” the lawyer added.

According to the Gender Gap Index, Egypt came 131st in women’s economic participation out of 142 countries. Yet the index stated that women had full access to land ownership.

“A woman with economic power puts her in a position to fight for her status in society. Status, not rights, as women are partners in the society,” said Fawzya Al-Meknasy, head of Prisma Media Agency and who was chosen to be April’s “Lady of Peace” by PeaceWomen Across the Globe.

Women own only 2% of land, Tellawy said, calling for more female ownership. “If women don’t get economic empowerment, they won’t gain respect.”

“The Egyptian woman already has her capabilities,” Alexandrian governor Hany el-Messiry said at the Alexandria conference. What is needed is the activation of the “human” rights concept whether for the man or woman, studying the role of men in women’s issues, the empowerment of women since childhood, and implementation until social acceptance happens, the governor said.

Learning from the private sector model, recommendations were made to be put into action in the public sector. While the 2014 gender report pointed to the lack of legislation prohibiting gender-based discrimination, the conference pointed out that studies are to be conducted to test employees’ satisfaction of their institution’ policies with regards to equality and non-discrimination, as well as their professional and personal needs.

More measures for better work environments for women include having nurseries at work places, issuing laws against violence and harassment at work, and providing legal and psychological aid for women subjected to violence or harassment.

The role of the media and education

Al-Meknasy underscored the need to fight backward thinking, and not just with regards to women. She stressed the use of media for this purpose. Rwanda’s Mbabazi acknowledged that media played a key role in women’s empowerment in her country.

Mbabazi also said that “an educated mother means a wealthy country”, and Gaby said that power means responsibility, education and other services.

According to the conference, the media should implement policies to shift the way society looks at women, and to give women more self confidence. Media must shine the light on the leadership roles women have assumed throughout history.

It should also collaborate with the civil society and researchers in the field, and draw attention to the importance of women’s role for development, as a citizen of equal rights.

A method used in Rwanda follows that “men are not evil, they are just ignorant”, as men misunderstand women’s empowerment, Mbabazi stated.

Towards a brighter powerful future

“There is no democracy without women,” Gaby stated.

In 2008, Rwanda became the first country ever to have a female majority in parliament, at 64% representation. That same year, the legislature adopted a progressive law making domestic violence illegal and mandating harsh prison terms for rape. One million women and children have been elevated from poverty since the 1990s.

The government’s commitment to gender equity, the promotion of equal opportunities, and measures taken to address the post-genocide consequences (to the extent that they have a gender minister) is what brought about change in Rwanda.

“Go to your constitution and check which articles you can use in your favour,” instructed Mbabazi.

Al-Tallawy stated that she was optimistic, especially after the 25 January Revolution. “Women’s status in Africa is greatly improving,” she noted.

Women are natural leaders, Madonsela believes. Like Cleopatra, she said, they have taken control since ancient times.

“[Women empowerment] is the only way for this glorious country of yours to recapture its glory in the world,” said Madonsela.