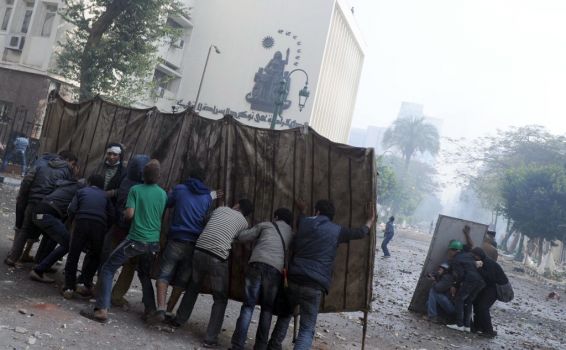 The Cairo Criminal Court postponed the retrial of 16 defendants in the 2011 cabinet clashes case to 9 June.

The defendants were sentenced to life in prison in absentia on 4 February and a fine of EGP 17m over charges of violent protests, assaulting security forces and the burning of the Insitut d’Egypte in Cairo. The case had 268 defendants, along with political activist Ahmed Douma.

The defendants requested a retrial, which is conducted by notorious Judge Nagy Shehata. He ordered the detention of a journalist for 24 hours for ‘disrespect to the court’, for discussing the case with a lawyer during the session, state-owned newspaper Al-Ahram reported.

Other media reports said Shehata also ordered the detention of a police conscript for a sideline conversation with one of the court’s staff. Al-Ahram also reported that Shehata confiscated a mobile phone from a defence lawyer who was taking pictures of the judges without permission.

The court listened to eyewitnesses from the security forces’ side, who claimed protesters used Molotov cocktails and melee weapons in attacking public facilities. Additionally, Al-Ahram reported that the court heard the testimony of a sociologist regarding one defendant who is a minor aged 15 years old. The sociologist reportedly said the child was too young to be held accountable for his actions.

On the first day of the re-trial in March, some defendants presented themselves before court in respect to regular procedures. However, Shehata ordered their detention.

The trial sessions have been controversial as the judge was criticised by lawyers and by Douma for being politicised. Prominent lawyer Khaled Ali had quarrelled with Shehata in court over his remarks in favour of the police and the military, which was considered a bias against the defendants.

Shehata used his authority to refer Ali to prosecution over charges of insulting the judiciary. As a result, Ali and a number of human rights’ lawyer withdrew from the case. The Lawyers’ Syndicate also issued a decision for lawyers not to take the case.

The 2011 cabinet clashes ignited when demonstrators organised a sit-in at the cabinet headquarters protesting the appointment of Kamal Al-Ganzouri as prime minister by the then-ruling Supreme Council of the Armed Forces (SCAF). The military police attempted to disperse the sit-in, resulting in violence which lasted four days.

Moreover, according to reports by the independent Front to Defend Egyptian Protesters (FDEP), the military police held protesters in their custody inside the cabinet and the near the People’s Assembly headquarters, where they assaulted them.