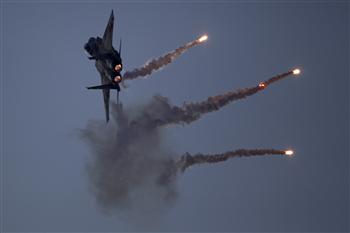 Israel launched airstrikes across the Gaza Strip Wednesday morning, although no casualties were reported as a result.

The airstrikes come in response to an alleged rocket fired from the strip on Tuesday evening in Southern Israel.

It is feared that another war may be sparked in Gaza, which is still barely recovering from the aftermath of last summer’s 50-day airstrikes.

In July 2014, a conflict was sparked between Israel and Hamas, leaving over 2,140 Palestinians dead, 10,000 injured, and severely damaging the Gaza Strip, with over 80,000 houses partially or completely destroyed. On the Israeli side, the death toll was 73.

Egypt brokered a ceasefire agreement between the two sides, and in October 2014 hosted the Gaza Reconstruction Conference. This saw a worldwide pledge of millions of dollars in aid to the Gaza Strip. However, the damaged strip only received a small percentage of the pledged aid, according to a March statement by the UN Special Coordinator for the Middle East Peace Process, Robert Serry.

Senior Hamas Official Bassem Naeim told Daily News Egypt that “the news of the rocket launched from Gaza was reported by Israeli media outlets, however it is unconfirmed”.

Naeim added, however, that Israel has hit “20 sites” in the Gaza Strip after “the claimed rocket hit Southern Israel “.

Regarding the possibility of another war between both sides, Naeim said that “it is possible; Hamas doesn’t wish for it, though”.

Naiem added that since the conference, “very little was implemented”, blaming it on the blockade by Israel.

Israeli Defence Minister Moshe Ya’alon warned Gaza against the escalation of violence, saying that it “will pay a heavy price”.

The Israel Defence Forces’ (IDF) statement said that it struck militant infrastructure in the southern Gaza Strip, in response to the rocket fire. The statement concluded by placing responsibility for the firing of the rocket on Hamas, according to Israeli news website Haaretz.

Hamas placed responsibility for the escalation on “the Israeli occupation”, and warned against further escalation.

No side claimed responsibility for the alleged rocket fired from Gaza. Several Israeli media outlets, though, blamed the “Islamic Jihad”, a Palestinian movement operating mainly in Gaza.

The Rafah border crossing between Egypt and the Gaza Strip was opened in one direction on Tuesday and Wednesday, for the flow of Palestinians to their territories. The crossing has been mostly closed for “security concerns”. During the 50-day summer conflict in Gaza, the border remained closed for the most part.