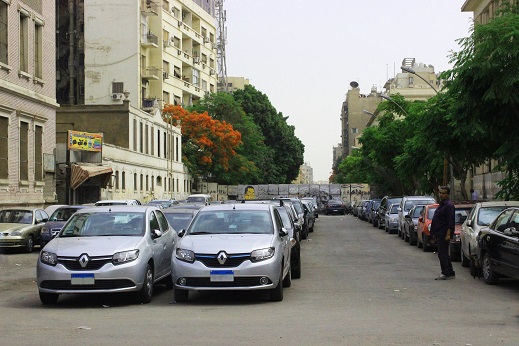 In a city where the number of vehicles reached 2.3m in 2014 and only eight public parking areas, finding a parking spot in Cairo becomes a daily life struggle – sometimes illegal, and often very expensive.

There are about 30 car keepers in Mohandessin’s main streets, and they charge on average EGP 5 per car, whilst in Tahrir Square, a recently launched public parking charges EGP 4 for the first hour, EGP 3 for the second hour, alongside prepaid cards services and buses to transport its customers around the Downtown area. Freelance car keepers on the other hand, charge EGP 10-15 for each car.

Cairo’s very own car keeper, more commonly known as the “sayes”, jumped on the scarcity of parking spots, to help car owners park their cars and help himself find a daily income.

A Daily News Egypt investigation on the job of the sayes in the Downtown and Mohandessin areas found the majority of them do not have official licences. Policemen often turn a blind eye to their dealings.

“Car keepers have been hired by police officers as ‘informers’ long before the 25 January Revolution,” traffic expert Major-General Magdy Al-Shahed told Daily News Egypt. “Most of them are not licenced because getting a licence requires administrative procedures and a criminal record.”

The Ministry of Interior seemed to be cooperating with unlicenced car keepers, as the majority of them said, when interviewed, that the police do not bother them, as long as they “know them well”.

Major Ahmed Shoura, the public relations officer for the Interior Ministry’s General Department of Traffic, commented on thesayes working as a police informer, saying: “This is not a bad thing; you need to have eyes in the streets. It is like why we leave some cafes open until 3 in the morning, because thieves will fear being seen at night.”

The most commonly known type of the sayes is the “freelancer”, or the volunteer who does the job of a garage keeper to “reduce the traffic” as some of them claim.  In other versions of the story, the sayes’ job is not to park vehicles or pick parking spots, but rather to protect vehicles, according to Al-Shahed.

Following the clashes that took place in Mohamed Mahmoud Street in November 2011, the police put up blockades in the middle of side streets leading to the Ministry of Interior’s headquarters, turning these streets into dead ends. Yet, despite the inconvenience of the blockades, this was a major perk for car keepers in Downtown.

Maher Salem, a sayes in Mohamed Mahmoud Street, said he took advantage of this case and exploited it, along with more than four other men, to start charging people for parking their cars there at EGP 10.

“This is not a garage, this is just a street we moved to instead of the main street in order to make a living,” Salem said.  “The police never used to bother us here; they know me because I am from this area and they even used to help me, but now I do not understand why policemen started bothering me, when my job is to help them watch over the street if any of them is busy or away.”

Not all of street car keepers got their job easily; some of them suffer to maintain the spots they are working in, such as a woman who preferred to speak on condition of anonymity, working as sayesa in Mohandessin area.

“I started this job after my husband, who used to work here on the same sidewalk, passed away,” she said. “People harass me and even say I am some kind of thug, but I could not find an alternative source of living.”

According to her, she failed to get a licence to practice her job more safely. “One day I was sick, and a thug took my work area, since then I have to pay him EGP 25 everyday so I can stay here,” she added.

The perks and perils of the new Tahrir Garage

In Downtown, many of this job’s practitioners lost this mode of earning daily keep after the opening of the Tahrir Garage. A campaign was also launched by the Ministry of Interior,  prohibiting parking cars in the main streets of Downtown, such as Qasr Al-Nil, Talaat Harb, Sabry Abu Alam, Sherif and Mohamed Farid Streets.

Street car keepers faced a threat after this move, as Saad, asayesworking in Downtown, said that one of his colleagues was earning EGP 80-90 per day, and now has no source of income after the opening of the Tahrir Garage.

The Tahrir Garage affected licenced street car keepers too. SA, who worked for 15 years in the Downtown area with a licence, said that fewer vehicles park in his area after the latest campaign.

“The licences are cancelled now and the governments stopped renewing them, so everyone is working without a licence now, in Downtown and everywhere,” he added.

The lack of parking spots around Downtown resulted in raising the cost for parking, according to Tamer, a sayes Downtown, who raised the cost of parking per day to EGP 20 after the new campaign.

Tamer said: “I used to work with my brothers for many years, now they do not have any job. Reacting to the downturn, my colleagues and I tried to win the police over by giving them money, but they would still bother us.”

What it takes to become a sayes

Saad, Om Mohamed, Salem and Tamer shed  light on other requirements of their job, which includes working in groups and protecting the street. They said it is rare to find a sayes working alone in one street – they distribute the work between them in shifts.

“I worked from 3pm to the evening every day, and someone else had the morning shift,” Om Mohamed said. However, she claimed that it was not an organised business. “The whole thing is going on by tradition, through connections, so you all end up working together,” she said.

Meanwhile, Saad said: “I hired three with me from among those who lost their jobs. They would rather work with me than do something illegal.”

Mahmoud Adel, who works in Mohandessin with at least four men in the same place said: “I have been working here for about five months; my uncle is the ‘patron’ of this street here so he hired me.”

“Street car keepers have become a threat. People try to avoid troubles caused by them and pay them whatever cost they ask,” Al-Shahed said. When asked about the official stance towards their existence, he added “both licenced and unlicenced street car keepers are illegal”.

Al-Shahed, described their relations with policemen as “abnormal”. He claimed they make about EGP 300 daily.

“The law must be amended in order to avoid their violation of legitimacy, and awareness should be spread among traffic officers that the sayes is a guard, not a traffic organiser,” he added.

Shoura affirmed the aforementioned view by saying: “There is no such thing as a licenced sayes, and there is nothing called ‘renting a sidewalk’, all these men you see in the streets are working illegally, that is why we catch them, except those who are hired by the government”.

According to Shoura, if any policeman leaves the sayes, it is usually out of sympathy. “You need to understand that this is a human being who would rather do this than do something illegal, but when he crosses the line we know how to deal with him,” Shoura added.

Street car keepers were said to violate the constitution through benefiting from public properties. Article 33 and 34 in the 2014Constitution state respectively that “the state protects ownership, of which there are three types: public ownership, private ownership and cooperative ownership”,and “private property is inviolable and may not be infringed upon. It is the duty of every citizen to protect it in accordance with the law”.

However, car owners have varying opinions regarding the Tahrir Garage. They believe that it is located far from their target destinations in Downtown, in addition to its “relatively high price”. Garages around Downtown have been suffering from overload since the last campaign.

“I might spend up to two hours every day looking for a parking spot in Downtown after the prohibition of parking in the main streets, which affects my performance at work. I do not park in Tahrir because it is far from my office and it is expensive,” said Hany, an employee of a company in Qasr Al-Nil Street.

Meanwhile, Mohamed Samir, a student who parks in the Tahrir Garage, had a different opinion: “The parking is the only place available to park in the area; you can’t just park in the street now. Tahrir is clean and organised, but I understand it might be relatively expensive for some people.”

Hassan Ibrahim, a worker in a governmental garage in Al-Falaky Street, says that the drivers usually prefer it because it is cheaper than the Tahrir Garage. A sayes who still works in Downtown charges an average of 10 EGP for each car.

Mohamed Gouda, a car owner, said that street car keepers usually ask for more money than he offers, and if he does not pay them, they threatened to “damage his car”, and he would find two or three more men coming to start a fight. Moreover, he says that “the sayes is doing this to pay the government [as rental] as though the province authority sold [the street] for him to bully me”.

Zeina Hatem, a student and a car owner, said that she had a fight before with a sayes, where he asked for more money, so she called the police. “The police officer didn’t arrest him [the sayes]; all he did was that he calmed down the fight,” she said.

Zeina added that some of them do not ask for more money than she pays, while others do. “I don’t think that there is a sayes who does not get on well with the police; they are all working with traffic officers,” she added.

This story is part of a special reporting project, “What Lies Beyond”. It features students across six universities, who are reporting in-depth stories and investigations on many of Egypt’s current events and issues.