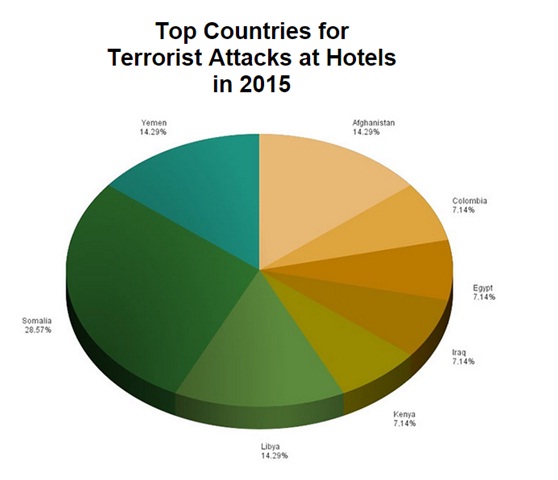 A report by intelligence company IntelCenter has ranked countries internationally by the number of ‘terror attacks’ on hotels so far in 2015, with Egypt coming in joint-third.

The report identified 14 incidents at hotels this year internationally, with Somalia highest with four attacks, and Afghanistan second with two incidents.

Despite coming in third, Egypt only witnessed one attack on a hotel this year. In January, a large scale operation conducted by Islamist militant in North Sinai resulted in the deaths of at least 26 people, mostly soldiers.

Security officials at the time said rockets and a car bomb targeted police offices and a military base in Al-Arish. However, a nearby hotel that was struck by rockets is understood to have been a target as it is owned by the military, rather than used for tourism, and is thus in keeping with the majority of terrorist attacks in Egypt.

However, a report released in April by the Tahrir Institute for Middle East Policy claimed that the number of terror attacks in the first three months of 2015 was equal to the number in the whole of 2014.