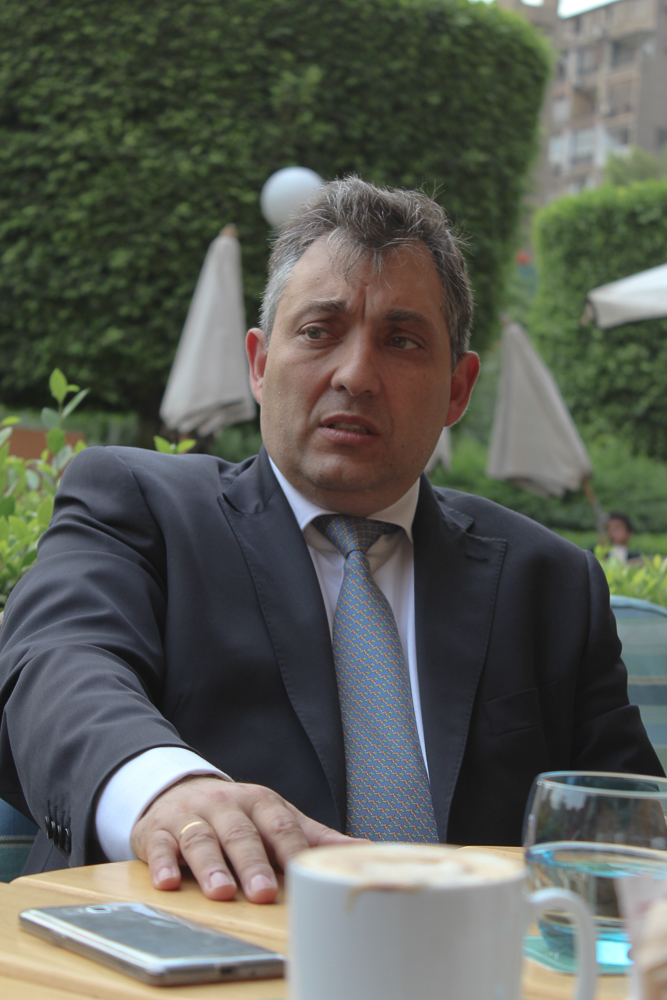 By Shaimaa Elise and Ahmed Eladly

Daily News Egypt interviewed the Chairman of Russian-Egyptian Business Council , Mikhail Orlov,following the Egyptian-Russian Business Forum held on 25 and 26 May in Cairo, to talk about the opportunities and challenges of Russian business in Egypt.

During the forum, the Russian business delegation and Egyptian officials signed five agreements. When will they be finalised?

During the forum, memoranda of understanding (MoUs) were signed, not agreements. So far, I signed two MoUs as the chairman of the REBC. They are quite strategic agreements, because they involve collaboration of the council with different organisations, as we want more associations to come and join this collaboration to open a network of contact with different associations to present Russian business. Through this network, we can have thorough penetration in the Egyptian economy and benefit from recommendations and advices.

We have some Russian companies that are interested in the pharmaceutical, medical, furniture, real estate and car sectors. I hope they invest in these sectors within the next three or four years, rather than the next six months.

Now, in the business issues, we are not talking about a concrete signature. During the forum, several companies held meetings in parallel to look at launching production activity in Egypt, which is good news. I had several discussion with these Russian companies ; they are not sure with whom they will cooperate, some of them are still looking for partners and some have already have a short list of three or four potential partners, but still have not decided with whom to work. What I want to say is that we are at the beginning of the process.

First of all, we have enormous support from the Russian government on the one hand, and there are 300 Russian companies that hope to start business in Egypt. Receiving the Russian delegation by the Egyptian government showed a highly level of commitment, starting from President Adel Fattah Al-Sisi himself, the Prime Minister Ibrahim Mehleb and the ministers one by one.

Business relations between Egypt and Russia have been delayed for 40 years. So renewing that relationship with the potential partner is not solved in one meeting or one event.

Can you give us more details about the Egyptian-Russian-Emirates fund that was declared in the conference?

That is one of the issues, which is that everywhere people are looking to develop trans-border activities, which are necessary to provide funding. Funding in Egypt is not enough, and it’s the same in Russia because of the general restrictions in the capital market in the two countries. Russia is now facing issues with Western sanctions, and Egypt also want to diversify its partnership away from the monopolies of America and Europe, so the idea emerged from the need for the fund, and this fund resulted from a political decision.

I hope the process take place soon, as there are many procedures that are supposed to be taken in this fund, such as understanding who is committed to the fund, and where the money comes from.

How much money is designated for the fund?

I heard seven numbers for the fund, but I don’t want to mention them because the truth is we don’t know yet. I heard $1bn and $2bn but the amount doesn’t matter. The most important thing now is to create a positive track record, as money is available in Russia, but limited at the same time. Investment opportunities are available everywhere in the world, not only in Egypt. After the Economic Summit in Sharm El-Sheikh, I can argue that Egypt is one of the best destinations for investment in the world. This joint fund is going to be a positive record of accomplishment of Egyptian-Russian business relations.

Are Russian companies participating in this fund?

The Russian private companies work in direct business, not through the fund proposed, but the fund is co-invested with the private sector.

The funding is from the Russian government. Some financing comes from the government budget and some from the sovereign fund of Russia (fund from direct investments in Russia). In addition, the money for the fund will be allocated for the companies’ projects.

Launching this fund will take at least six months to build up.

What is the role of the council in developing the business market in Egypt and Russia?

The council is creating a field for interaction, and organising events from time to time, such as the forum we had last week, which has political dimensions. However, many other events are held in Russia targeting very specific issues, like the convertibility of the Russian rouble and the Egyptian pound.

Do you think it is possible to rely on the local currencies of both countries in future economic exchange between Russia and Egypt?

Yes I believe so. I know that there are a lot of technical issues and obstacles, like balance payment, the foreign currency and others that need to be coordinated through the Central Bank of Egypt (CBE) and the other specialised agencies in the government, and the process takes time in both countries.

What do Russian companies demand from the Egyptian government to boost investments?

We need clear information about some tenders issued by the Egyptian government, and Russian companies want to participate in these tenders as we need more transparency and more clarification regarding the time of tenders and procedures.

Moreover, we need information about the one-stop-shop policy, hard currency and exporting the money back.

When we spoke to the Egyptian government, we received a very systematic answer regarding this issue, as it is a question of time.

What is the size of Egyptian investments in Russia?

It is very little; it doesn’t exceed tens of millions of dollars.

What stands in the way of Russian investment in the industrial zone?

What are the Egyptian government’s demands from Russia?

I receive demands of the Egyptian government all the time, asking for reciprocity. When the Egyptian side imports pharmaceutical, agricultural and Setra products from Russia, Egypt demands the same treatment for its exports to Russia.

Following the Economic Summit, many projects were declared. Do Russian companies intend to participate in investments?

I hope so, as one of our missions is to attract attention to these projects, and companies should talk to other companies of potential partnerships regarding these projects. Our job is creating awareness about Egyptian investment opportunities.

Russian companies showed an interest in logistics and infrastructure projects taking place in the new Suez Canal project, but I can’t give orders to the companies to come and invest.

Egypt to Russia is quite unknown territory, irrespective of tourists, because they only visit Sharm El-Sheikh and enjoy the beaches. Egyptian business is not so clear to the Russian companies.

Did you agree with the Egyptian government to hold a conference in Russia to promote Egyptian investments?

We discussed this proposal, but we haven’t decided yet, and it needs to be followed up. I think it is not going to be this year, but next year.

Some Egyptian fruit shipments were sent back to Egypt; can you tell us the cause?

This is one of the problems raised between Egypt and Russia; there are measures to accept the fruits or potatoes or other agriculture products exported by Egypt. I believe that the purpose of efficiency of business is through creating joint phyto-sanitary permits to avoid these problems. If these problems occur once it is terrible, but if it happens more than once, it leads to stopping trading, so the Egyptian government should make sure of the quality of the exported product before it leaves the country.

Did the Egyptian government discuss the issue of increasing wheat imports from Russia or new wheat shipments?

No we didn’t, but we are interested in the Damietta logistics project, especially the wheat hub project, and hope Russian companies will take part in it.

This activation will be an opportunity for Russia to increase its trade balance with other African countries through Egypt. As Egypt is the doorway to Africa, and Russia is the doorway to Kazakhstan, Uzbekistan, and Eastern Europe, they can exchange exports to these countries.

Do Russian banks have potential to enter the Egyptian market?

Not yet; it is one of the things I have on my agenda for the second part of the year, but we have many problems at home because banks are on the list of the sanctions imposed by the West.

I don’t expect a major move from these banks, as they don’t have the right to receive money from outside. If these banks want to finance the business market, they will face European sanctions.

What other non-western markets has Russia entered into?

China, India, Latin America, and other BRICS markets, as these countries have more than half of the world population, so Russia is intensifying its relations with these countries.