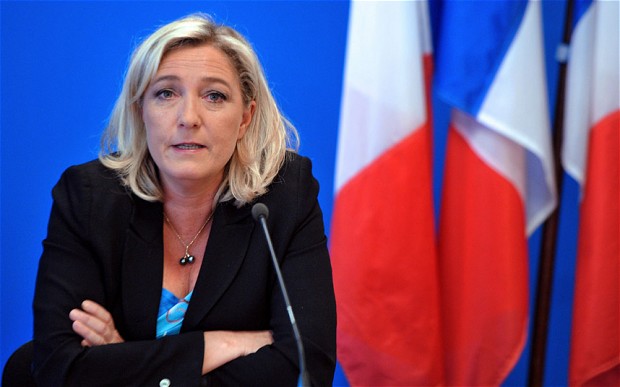 Speaking at the end of a visit to Egypt to meet religious and political leaders, French nationalist leader Marine Le Pen said she supported the policies of President Abdel-Fattah Al-Sisi. She said, however, that the trip did not change her opinion of Arab and Muslim immigration to France.

The leader of France’s National Front Party, which is known for its hostile attitudes towards Muslims, said at a press conference following meetings with leaders of Muslim and Christian institutions and Prime Minister Ibrahim Mehleb, that “Egypt, for us, is the castle that will protect us” from Muslim immigration to France.

Le Pen, who will run in the 2017 French presidential elections, stands strongly against significant immigration, and has been supportive of policies banning the hijab and forcing schools to serve pork to Muslim pupils.

At the press conference, she praised the “courageous choices” made by President Al-Sisi about his vision for Islam and politics across the Middle East. She said Al-Sisi has a “clear” message about fighting extremism and echoed his administration’s stance that the outlawed-Muslim Brotherhood is ideologically connected to “Islamic State”.

“We can’t just welcome [immigrants] in France – the only solution is that we protect them in their country and for them to continue to live in their country,” Reuters reported Le Pen as saying.

Le Pen arrived in Egypt last week for a meeting with the Grand Imam of Al-Azhar Ahmed El-Tayeb, Sunni Islam’s highest authority, and Coptic Orthodox Pope Tawadros II, where she said that her meeting represented solidarity with Christians in Egypt and the Middle East.

Al-Tayeb told Le Pen, who chose not to wear a hijab during the meeting, that the world’s leading Sunni Muslim body had “serious concerns” over her party’s “hostile opinions” towards Muslims and Islam.

However, Le Pen said during the meeting that she “recognised the need to not confuse Islam with the violent acts committed”, according to an Al-Azhar statement.

Grand Imam Al-Tayeb said during the meeting that one of the main reasons the world is suffering in relations with Muslims is that the West has provided opportunities for extremists to take power, and also called on the world to counter the threat of Islamophobia.

Whilst the meeting was requested by Le Pen, Al-Azhar said that it accepted encouraging positive dialogue and tackling the misconceptions and misinformation about Islam in the West, at a time when fear and hatred of Muslims is growing significantly.

President Al-Sisi has regularly promoted Al-Azhar as a beacon for ‘moderate’ Islam that can revolutionise outdated attitudes of the religion and political Islam. The institution is the leading theological centre of Sunni Islam and oversees the teaching of hundreds of thousands of pupils across the world each year.