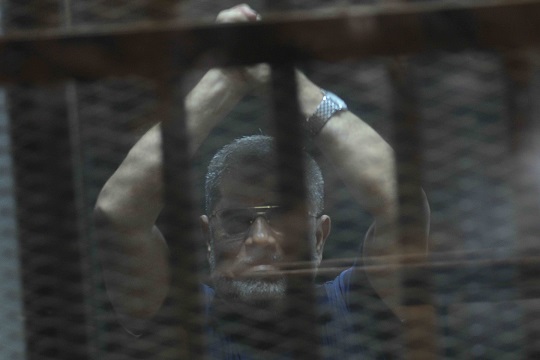 Adjourning the final verdict against former president Mohamed Morsi in the espionage and prison break trials is a pure “political move” to save the current regime embarrassment in front of the international community, a Muslim Brotherhood spokesperson said.

Earlier Tuesday, the Cairo Criminal Court postponed the espionage and prison break trials to 16 June. On the same day, President Abdel Fattah Al-Sisi started an international visit, where he is expected to visit Germany and meet Chancellor Angela Merkel.

Morsi and other Muslim Brotherhood leaders are accused in the cases, with some already having been handed death sentences, including Morsi.

“Imagine a country’s coup leader visiting a European country where he is leaving the legitimate leader to face possible execution. The coup leaders will not look good,” the spokesperson added.

The court had previously referred the files of the defendants to the Grand Mufti for consultation. The defendants include the former president, Muslim Brotherhood Supreme Guide Mohamed Badie, former parliamentary speaker Saad Al-Katatni, and renowned Muslim scholar Yusuf Al-Qaradawi.

Morsi and 34 other Brotherhood members are accused of storming Wadi El-Natrun prison and escaping it in the early days of the 25 January Revolution. The charges included kidnapping police officers and detaining them in the Gaza Strip.

Outside the heavy fortified Police Academy, special forces from the riot police secured the vicinity of the court.

Only Egyptian state television was allowed in to the court, while media personnel from other outlets were allowed to report from outside the Police Academy.

The political arm of the Brotherhood, the Freedom and Justice Party (FJP), said “it is not surprised by this highly politicised decision”. It added as Al-Sisi is due to meet German officials, noting that it is not a coincidence either that the chosen date is 16 June.

Egypt is expected participate in the African Union Summit in South Africa this June.

“However, worldwide public opinion must not be fooled by today’s politicised decision,” the party said.

Morsi, who was the head of the party, was sentenced in April to 20 years imprisonment in the ‘Presidential Palace’ case, alongside 12 other defendants. They were accused of violence that erupted outside the Presidential Palace on 5 December 2012.

Morsi has been in custody since his ouster by the military on 3 July 2013.

Until his first appearance in court on 4 November 2013, his place of detention was unknown.

The former president, who came to power on 30 June 2012, admitted in a televised interview with Al Jazeera channel on 28 January 2011 that civilians stormed into the prison and freed them.