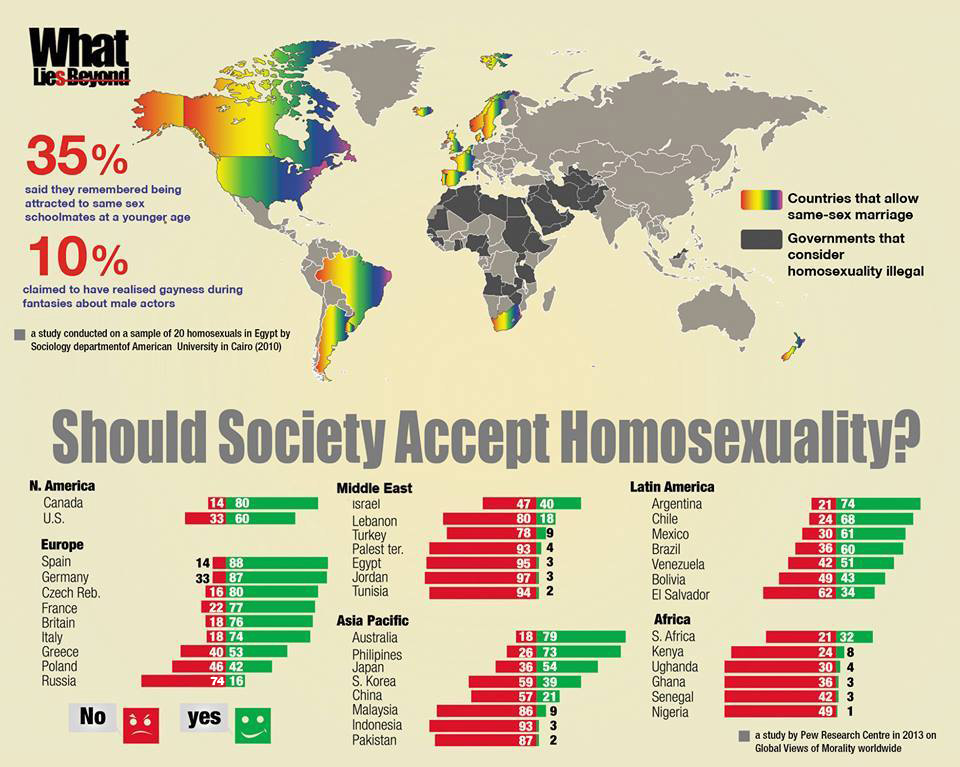 This story is part of a special reporting project, “What Lies Beyond.” It is featuring students across 6 universities, reporting in-depth features and investigations on many of Egypt’s current events and issues.  Names used in this story have been changed according to the sources request to protect them.

Since Adam was a little boy, he said he always felt different, until he turned 11 when he had his first physical contact with a boy. “We both had no idea what we were doing,” he said.

As he turned 17, he knew for sure he was not straight. He explains: “I was so confused about my identity, so I isolated myself from everyone, I did not have any friends, I tried to be straight; I entered relationships with couple of girls but it did not work. In my first year at college, I was still struggling with my sexual orientation”.

As Daily News Egypt spoke to a group of homosexuals living in Egypt and researchers to indicate the daily life struggles and triggers of living in this community, it appeared that for many of them, homosexuality was not a matter of choice but rather natural. However, they face constant violations on the social level, as the government has increasingly been criminalising their acts.

“Well, being gay in Egypt is definitely not easy. You face so many difficulties and struggles every day from different perspectives. First, there is the self-acceptance part, which is really hard, as we live in an Islamic and an extremely religious society that deems and forbids homosexuality, and views gay people as freaks or people with illness and people who are against God,” said Mark, 21.

The Lesbian, Gay, Bisexual, Transgender (LGBT) community is represented by their very own rainbow flag, indicating love and self-acceptance.  According to a 2013 survey by the Pew Research Centre, 95% of Egyptians believe that homosexuality cannot and should not be accepted in society. Some people actually believe that there are only few or no homosexuals in Egypt, while those who believe there are homosexuals living among us, think they should be imprisoned.

“Being a homosexual was never an option, at least not for me. Some people say it is a sin, and some say it is a disease. Some will show fury, and some will show pity. But what does really matter is acceptance. It is real torture and almost impossible for one to live in a society where people cannot accept us just the way we are,” said Adam.

The exact number of homosexuals in Egypt remains unclear, as the majority of them fear the consequences of publicly disclosing their sexual orientation, yet their rates have been increasing, according to certified Egyptian sexologist Heba Qotb.

On 9 May, Qotb said during a TV interview: “I receive between 2-3 homosexual cases per day at my clinic.” She also said the majority of homosexual cases stem from bigger societal norms and family issues.

Daniel, 21, said: “I was sexually harassed by my cousin at the age of 6. I did not have any sexual experience until I was 17 and half. I had a friend when I was in high school that made me embrace the idea more,” he said.

He added: “My first experience was when I met a married man on a train, he called me and wanted to meet with me again but I did not go. Then, I started meeting random people in the streets. I had that idea of relationships, but everyone I met always seemed to be only interested in sex.”

However, according to people Daily News Egypt spoke to, some who were receiving medical treatment at Qotb’s clinic, homosexuality is not a disease to be cured.

One of them, who preferred to speak on condition of anonymity said: “I have faced discrimination during my treatment by the clinic staff. They treated us like we have an infectious disease.”

Likewise, Daniel said: “There was no specific time when I knew I was gay, it seemed normal to me, I never felt different or abnormal like lots of guys that I met that could not accept themselves.”

He explained: “Since I was little, I used to watch American media, and it was really acceptable for them, especially Opera Winfrey’s show which always hosted homosexuals. So I accept myself, and I am really convinced with who I am.”

Dalia Abdel-Hameed, head of the gender programme at the Egyptian Initiative for Personal Rights (EIPR), told Daily News Egypt: “Basically, any person who has an odd complexion is often exposed to some sort of attack from society members, even though they might not be real homosexuals.”

She added: “The majority of homosexuals are often exposed to traumatising experiences once their identity is revealed, sometimes they lose their jobs or families; they are constantly under a bigger societal pressure.”

“I have been abused by my family, my father used to hit and curse me, I was closer to my mother; and since I was little, my close friends were always girls, I never liked boys’ stuff, like cars or soccer,” said Daniel.

According to Abdel Hameed, a crackdown on homosexuals has been increasing since 2013. “There is no clear justification behind recent police acts against homosexuals, but some people interpret it as a tool the state uses to market itself as a more Islamic state than the Muslim Brotherhood,” she said.

Every day is a daily acting show, as a group of homosexuals described to Daily News Egypt, as they attempt to hide who they are for fear of judgment by people and the society.

“This lying “act” just tears you up from the inside knowing you are lying to everyone about who you really are, and not having the freedom to express what you really feel and express a big part of who you are,” said Mark.

However, some were lucky to surround themselves with like-minded companions, who would accept them. Mark said: “I am lucky and grateful to have found those people in my life and I know many homosexuals struggle to even find one of those open minded people.”

“They say God hates us and that we will go to hell. All I can say is one thing, God is love and I do not think He is against two people loving each other and having a life together regardless of their gender. I wonder if we should feel guilty for having someone to love in our lives,” he added.

Graeme Reid, director of HRW’s LGBT rights programme told Daily News Egypt on Tuesday: “The clampdown on the LGBT community, or on people perceived to be LGBT, has no consistent pattern. Rather it comes in waves, but what we have seen is a sharp increase in the number of arrests under the Al-Sisi government.”

Between July 2013 and December 2014, Egyptian authorities arrested more than 95 people for same-sex conduct or gender expression.

On a social level, there is a high level of “animosity” to LGBT people or people who are seen to be LGBT, as Reid puts it. He also suggests this is made worse by the actions of the government that further stigmatises LGBT people.

“When the government creates a moral panic about homosexuality, it creates a climate in which discrimination and abuse can take place with impunity,” he said.

Although Egyptian law does not directly forbid homosexuality, crackdowns on the community took place with charges of “violating teachings of religion and public morals”. However, in most cases, the prosecution uses Article 9 of Law 10/1961, which is concerned with “debauchery”, to convict people accused of engaging in homosexuality.

In 2004, HRW brought out a report entitled ‘In a Time of Torture’, documenting the experiences of – amongst others – 52 men arrested in the Queen Boat incident, their abusive treatment in detention, their trial and subsequent sentencing.

“That report showed how homophobia was used for political purposes.  Sadly, more than ten years later, we see a resurgence of arrest and prosecution of people accused of being homosexual or transgender,” said Reid.

At the time, HRW was aware of at least 179 men whose cases under the law against debauchery were brought before prosecutors between 2001 and the publication of the report in March 2004, according to Reid.

A week ago, two transgender men were referred to the prosecution on charges of prostitution and posting sexually explicit videos online.

In December 2014, 21 men were arrested from a public bathhouse in Ramsis on charges of practicing “debauchery”. The defendants were acquitted one month later after tests by the  Forensic Medicine Authority could not proove whether 18 of the suspects participated in homosexual relations or not.

Reid further explained: “This cynical political strategy comes at great cost to the LGBT community as people are arrested under the vaguely defined laws criminalising “sexual deviance”, “debauchery” and “insulting public morals” and imposing sentences of between three and 12 years.”

In September 2014, Nine men were ordered by Prosecutor General Hisham Barakat to be held in preventative detention and examined by the Forensics Medicine Authority department. This came after a video went viral on social media platforms showing featuring them in an alleged same-sex wedding party.

In response to the intensifying crackdown on Egypt’s homosexuals, the Grindr dating app announced during the same month that users in certain countries, including Egypt, would have their distance and any personal information hidden on the app by default.

“A friend of mine was being really pushy about getting an HIV test, I did not really care about it, but he kept pushing me to go with him until we got tested a year ago and it turned out that I have HIV and he did not,” Daniel said. “It was a shock, and I wished it was not real but I kept living my normal life, I accepted it and I am not really afraid of death”.

According to Daniel, he came out to a lot of his friends about his homosexuality, receiving different reactions. They were all accepting in the end.

“When I told them about the HIV thing, they were more worried about it than my homosexuality,” he said. “When it comes to HIV, the ministry gives us the medication for free, but they treat us really badly, they despise us and they are not aware of our feelings or what we go through. They always say that what makes HIV takes over your immunity is depression. I am not like that, I do not fear death, I just do not want to die in pain.”

According to Reid, a crackdown on LGBT people is part of a broader disregard for human rights in Egypt.

“It is important to provide information that is accurate and not based on subjective morality,” Reid said. “Because of social prejudice and state clampdowns, LGBT people feel compelled to remain hidden.  This contributes to ignorance about LGBT issues in society as a whole.”

“I wish people could see us as humans and understand that we do not choose to be gay. We are who we are, we were created this way and we have the right to love and live our lives like everyone else. It’s time for a change to take place,” concluded Mark.

‘I Know Him, I Know Her’: a scary sign for distorted relationships