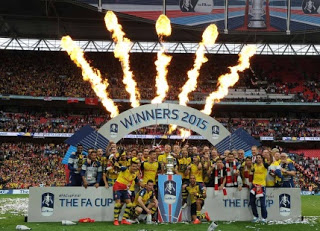 In a champions’ night, Spain’s Barcelona, England’s Arsenal, France’s Paris Saint-Germain, and Germany’s VfL Wolfsburg were crowned in their home countries this week, after the national leagues in Europe ended.

Barcelona won the cup title for the 27th time in the team’s history, when Argentine star Lionel Messi led a victory against Athletic Bilbao with a score of 3-1, with Messi scoring two goals. With this win, the team achieved their second title in the year and came close to their dream of winning three titles, to repeat 2009’s record.

As for Arsenal, the team made a new record when they won the English FA Cup title for the 12th time, with a score of 4-0 against Aston Villa in Wembley Stadium. This way, the team maintained their title for the second year in a row.

In the 40th minute, Theo Walcott scored the first goal, Alexis Sánchez scored the second in the 50th minute, and Per Mertesacker scored the third in the 62nd minute. The team scored the fourth goal in the last minutes of the game, to make the widest goal difference in the final game of the league.

French football manager Arsène Wenger made a record after being the most successful coach in the league. The coach led his team to win the 6th cup title in their 19th participation in the final games.

French team Paris Saint-Germain won for the third time in the local cup.

As for German team VfL Wolfsburg, they won the cup title against Borussia Dortmund with a score of 3-1, gaining their first title at the end of this great season. The team won the second place in the Bundesliga, after Bayern Munich, and qualified for the UEFA Champions League.

This season was a hard one for Dortmund fans after a goodbye to their coach Jürgen Klopp, in his last game with the team. Klopp was the coach for the final games of the Bundesliga for the third time, having previously won the title in 2012.

Italian team Juventus won the title for the local games in their country, after a victory against SS Lazio with 2-1 goals three weeks ago. The team now also dreams of a historic triple if they succeed in the UEFA Europa League against Barcelona next Saturday in Berlin.