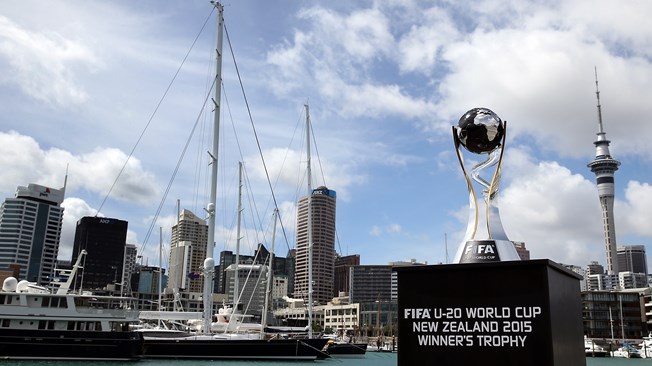 New Zealand is hosting the FIFA Under-20s World Cup in its 20th edition, the championship which took place for the first time in Tunisia, 1977, under the name of the FIFA World Youth Championship. The title went to the Soviet Union in 1977, after the Soviet team’s victory over Mexico via a penalty shoot-out in the final match.

A total of 24 teams qualified from six continents are competing for the title. For Africa, Senegal, Ghana, Mali, and Nigeria qualified to the tournament after they reached the semi-finals of African U-20 Championship that was held in Senegal. The African title went to Nigeria after it defeated the hosting team with a score of 1-0 in the final match.

From Asia, four teams participated in the championship: Qatar, Uzbekistan, North Korea, and Myanmar. The four teams qualified through reaching the semi-finals of AFC U-19 Championship organised by Myanmar in October 2014. Qatar acquired the title for the first time in its history after it defeated the North Korean team 1-0 in the final game.

As for North and Central America, and the Caribbean, Mexico, the US, Panama and Honduras qualified to the championship, after they reached the semi-finals of CONCACAF U-20 that took place in Jamaica. Mexico gained the title there, after its victory over Panama in the final game with penalty shoot-outs after a 1-1 draw.

South America participates with four teams, namely Uruguay, Argentina, Brazil and Colombia, after they gained the first four ranks in the finals of Copa America, organised by Uruguay. The championship title went to the Argentinian team, which has the largest number of titles in the World Youth Championship with six victories.

The championship system includes a competition between the teams in six groups, where each group contains four teams of which the teams that acquire the first and second ranks in the groups directly qualify to the round of 16. Then the best four teams that gain the third rank qualify.

In the first group, the US, hosts New Zealand, the Ukraine and Myanmar are competing, while the second group includes Argentina, Panama, Austria, and Ghana. In the third group, Colombia, Portugal, Senegal, and Qatar face each other, while Mali, Uruguay, Serbia and Mexico meet in the fourth group. As for the fifth group, the draw chose Nigeria, Brazil, North Korea and Hungary, while Germany, Fiji, Uzbekistan, and Honduras compete in the sixth group.

The lights are aimed at a number of players who helped their teams to reach the championship, including Germany’s Davie Selke, Argentine Giovanni Simeone, who brought nine goals for his country in Copa America championship, in addition to Nigerian Musa Mohamed who scored four goals in the African Youth Championship. Qatar’s Ahmed Al-Saadi, Uzbek Zabikhillo Urinboev, and the North Korean Jo Kwang-myong are also receiving the attention of the championship.

Mexican player Hirving Lozano and the US’ Romain Gall are expected as well to help their teams during the tournament, after they topped the scorers list of CONCACAF U-20 with five goals each.