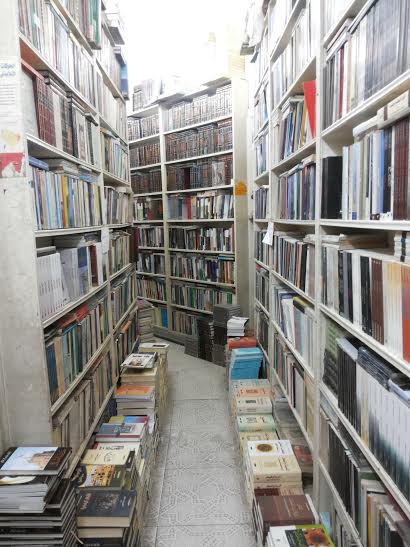 For centuries, humans have discussed and feared oblivion, the idea of vanishing without a trace. While millions leave this world every day, only a few manage to remain alive through their legacy, and the love people hold for them.

Radwa Ashour was a phenomenal author who still enriches Egypt’s literature scene, as she magically remains alive through her numerous novels. Even though she passed away last November, her new novel has just managed to attract an outstanding number of readers.

“This day is not for breaking or grieving. This day is to celebrate Radwa,” said Mourid El-Barghouthy, the Palestinian author and Ashour’s husband, who refuses to stop celebrating his wife’s birthday even after her death.

On Ashour’s birthday, Mourid, along with his son Tamim and Shorouk Bookstore, invited Ashour lovers to commemorate the true lady of literature in El Sawy Culturewheel. The loving husband and son could not mark such occasion in any form rather than poetry, the family’s craft and superpower.

Mourid started the night with “Radwa”, a poem he wrote about the lady of his heart in 1973, but never got the chance to completely recite before. The poem brought tears to the crowd’s eyes and received a loud and quite long stand ovation.

While his son sat next to him at the other end of the stage, Ashour’s picture stood right in the middle, between the two. With every verse, the picture became more vivid and her smile kept getting wider.

“The universe shut suddenly and left me standing in the middle of nowhere,” said Tamim describing the agony of losing his mother. Tamim, who is also a poet, recited a few of his famous poems that elaborated his feelings towards a world with neither a mother nor justice.

During the night, Mourid choose other poems about his beloved, such as “Long became the dispersion”, which he wrote back in 1987. It describes how Ashour is always more graceful and tolerant, and how the two of them complete each other the minute they finally meet.

By the middle of the event, Ashour was surely present amongst the audience. Therefore, Mourid could not help but recite the poem he knows she loved the most. “A blink from her eye in the wedding” is a poem about a simple wedding in a small countryside town that Ashour always asked Mourid to read to her.

Tamim, unlike his father was vibrant and energetic – his mother’s legacy left him demanding her life-long goals, freedom and equality. His choices included “They asked me whether I love Egypt”, which narrates his parents’ love story.

Tamim started: “They asked me do you love Egypt? I said I do not know but I know that I am Radwa Ashour’s son.” Nonetheless, the crowd’s outstanding reaction to the writer’s name made the proud son repeat his verse more than three consecutive times, each round his voice got louder and his emotions became more visible.

Being an Egyptian author, Ashour’s family and society did not accept Mourid’s Palestinian nationality smoothly. “They told her, he is a foreigner. He is absolutely unsuitable.” Amidst the crowds’ standing ovation, Tamim repeated firmly “Oh you slaves who are ruled by slaves. Since when did Ramallah become a foreign country?”

Aside of her role as an author, Ashour was also a scholar and a literature professor at Ain Shams University, something that she was always proud of, as it brought her closer to the youth. On the 25 January Revolution, Ashour was one the biggest supporters of the youth’s revolution.

The crowd included several well-known politicians, scholars, authors and activists, such as: Khaled Ali former presidency candidate and human rights lawyer; and Samia Jaheen, a poet and daughter of late Salah Jaheen, who attracted lots of attention with her new-born infant.

After showing their love and affection, the two poets sat down to sign Ashour’s latest publications, “The Scream”. Ashour was working on her latest masterpieces and the second part of her biography “Heavier the Radwa” during her last days. Unfortunately, she did not get the time to finish it.

However, being her biggest supporter and fan, Mourid published the book as she left it, and even went on to add the cover she picked before passing away.

Born in 1946, Radwa Ashour was a national treasure. She received several awards for her work, such as the Constantine Cavafy Prize for Literature in 2007. Mourid and Ashour were married in 1970, and together they have one son, Tamim Al-Barghouti who was born in 1977. Their love story was immortal to the extent that, after 30 years of marriage, Mourid tweeted on their anniversary “42 years of being with Radwa, yes life can be this generous”.

Ashour died last November after a long battle with sickness. However, her novels, along with her husband and son, are a continuation to a legacy that shall never cease to exist.