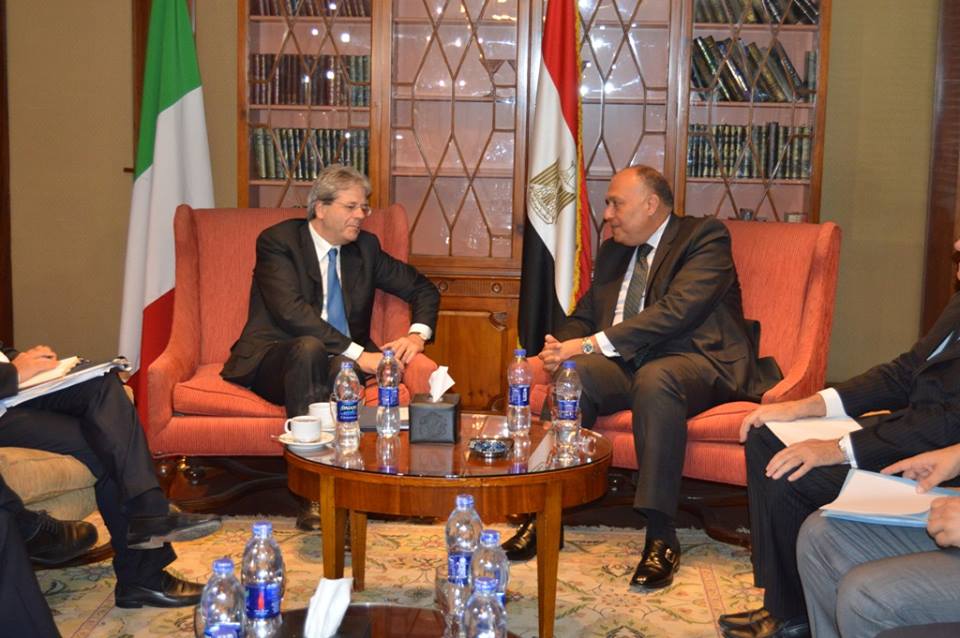 Egyptian Foreign Minister Sameh Shoukry met with his Italian counterpart Paolo Gentiloni on Sunday ahead of a tripartite meeting that also includes the Algerian foreign minister, regarding the situation in Libya.

The two ministers discussed the means of enhancing bilateral relations in various fields, as well as the possibility of reaching an agreement concerning loan swaps, and cooperation in the oil and gas sector between both countries.

Foreign ministry spokesperson Badr Abdelatty added that the ministers discussed several regional and international issues, on top of which were recent developments in the Libyan crisis.

The three states (Egypt, Italy and Algeria) share a common concern regarding Libya and interest in working towards the return of its security and stability, while focusing on the fight against terrorism and organised crime, according to the statement.

Shoukry reiterated the need to coordinate efforts among the three states regarding Libya, and the need to reach a political solution. He further alluded to the phenomenon of illegal migration that “negatively affects the European countries as well as north African countries”.

The Egyptian foreign minister also met with Algeria’s Minister of Maghreb Affairs, African Union and Arab League, Abdelkader Messahel, ahead of the tripartite meeting on Sunday, to discuss cooperation between the two countries regarding the situation in Libya.

The Algerian president had previously met with Shoukry and they had tackled the means of confronting the spread of terrorism and organised crime that resulted from Libya’s instability, and the need to galvanise efforts to form a national government.

Since former Libyan president Muammar Gaddafi was ousted and killed in 2011 following an uprising aided by an international intervention force, Libya has remained unstable.

The situation escalated in summer 2014, when General Khalifa Haftar opened an offensive against Islamist militias, which resulted in a rift in the country. Amid militant and tribal violence, two rival governments claim legitimacy in Libya; one Islamist in Tripoli; another, internationally-recognised in Tobruk.

In February Egypt conducted airstrikes against Libyan militant groups affiliated with “Islamic State”, in retaliation for the beheading of 20 Egyptian Copts. Amnesty International and Human Rights Watch claimed that civilians had died in these airstrikes, which were supported by the Tobruk government, but condemned by Tripoli.

The Egyptian government continues to warn Egyptians against travelling to Libya, and upholds that the return of Egyptians living in Libya will be facilitated and secured.