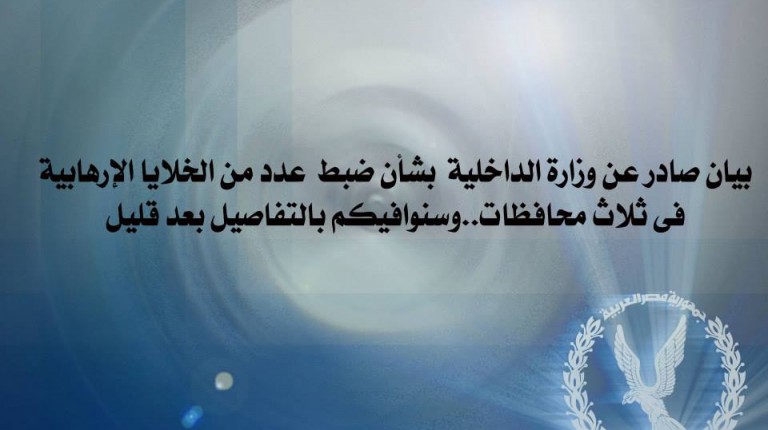 In extension of the state’s crackdown on alleged Islamists to retain security and stability as part of the “war on terror”, nearly 3,977 were arrested in 2015 on charges of belonging to the banned Muslim Brotherhood group, according to the official reports of the Ministry of Interior.

Daily News Egypt aggregated the reports published by the ministry from 2 January through 31 May 2015 on those arrested upon suspicion of belonging to the Brotherhood. The arrested were mainly categorised as middle rank Brotherhood leaders, members of specialised committees, or people wanted pending court sentences.

The numbers of arrests announced during March alone ranked the highest, up to 1,359, greatly exceeding the sum of arrests of January and February together, which amounted to 276. In the following months, the numbers remained high amounting to 1,188 in April, and 1,154 in May.

The Giza governorate ranked highest with the largest number of similar arrests occurrence, while Cairo, Sharqeya, Qaliubiya, and Fayoum ranked second. The reports also included all other governorates.

Despite the variety of arrest figures and locations throughout 2015, the charges were similar for all cases, including bomb explosions, riot, road blocking and protesting, running “inciting” Facebook pages. The most frequently used accusation was the constant alleged charge of “belonging to the Muslim Brotherhood terror group”.

Mohab S, lawyer at the Association of Freedom of Thought and Expression (AFTE), told Daily News Egypt: “The charge of belong to the Muslim Brotherhood is readymade by the state for nearly all cases we have dealt with.”

“The numbers of arrests have been increasing by 40%, and there is no legal justification behind it,” he added.

The AFTE students’ observatory has documented 749 students arrested through the academic year 2014/2015 on charges of belonging to the Brotherhood. The report, which was provided exclusively to Daily News Egypt, stated that at least 120 of them attended Al-Azhar University. The average number of arrests at other campuses such as Cairo University and Ain Shams University ranked lower, reaching only tens of students from each university.

As soon as  M.A. stepped outside of the Cairo University metro station, a group of men in civilian clothes asked him to step aside for a couple of minutes to interrogate him. Earlier that day, clashes had occurred between students and security forces, leaving one student dead and several injured, including the university dean’s son.

Suspected of involvement in the events, M.A., who agreed to speak on condition of anonymity, was taken away in the metro to a temporary detention facility. He was released in September, after eight months of detention, charged on counts of rioting and protesting without permission. During his stint in prison, M.A. said he had to endure extremely harsh living conditions and life threatening health conditions.

Another AFTE lawyer said: “People who are arrested on such charges are either currently in a pre-trial detention or were handed sentences.”

According to him, the police interrogate suspects and check if they have any pending sentences. Until the verification is done, the detainee usually spends lengthy days waiting for a prosecution investigation.

ANHRI issued a lengthy report on pre-trial detentions in Egypt over the past two years. It features journalists and students who have been detained without trial, such as photojournalist Mahmoud Abou Zeid (Shawkan) who has been detained for over a year without trial. Shawkan was arrested whilst he covered the security forces’ dispersal of the Rabaa Al-Adaweya and Al-Nahda Squares sit-ins in August 2013.

The discourse of interior ministry arrests reports in 2015 was very similar in terms of labelling all defendants as convicts, and sometimes leaders of the banned group.

The security situation during those months however is relatively the same. At least 12 bomb explosions went off in April, across Egypt killing about 30 civilians and security men killed and hundreds others injured. The most significant ones were in restive North Sinai, while other explosions targeting Media City in Cairo, and electricity power stations.

The assailants behind the explosions are usually referred to by state-media as members of the Brotherhood, but whenever responsibility is claimed for any attack it is often made by the Islamic State (IS)-affiliated “State of Sinai” rebels. The interior ministry mentions in its reports that the whereabouts of the assailants behind the explosions are unknown, and it remains unclear whether the people arrested afterwards on similar charges were actually the ones involved.