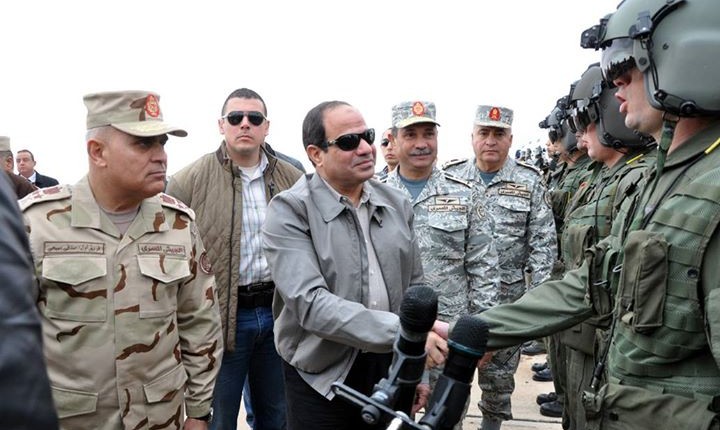 By Menna Zaki and Tim Nanns

Libya, Egypt’s neighbouring oil producing nation, has been among the countries suffering division within their political fabric after being hit by the Arab uprisings four years ago.

The increased violence and clashes in Libya forced Egypt to restrict the movement of Egyptians to Libya for months, while attempting to evacuate Egyptian nationals from Libya. These efforts gained ground, particularly following the decapitation of 20 Coptic Egyptians in February. However, Egypt reiterated its support of the internationally-recognised Libyan government in Al-Beida, mostly referred to as the Tobruk government led by Abdullah Al-Thinni.

Al-Thinni’s government, unable to counter the Islamists’ threat on its own, coordinated with the Egyptian armed forces to launch airstrikes on the city of Derna, an Islamist stronghold, in response to the decapitation of the Egyptians in Sirte. It was a move highly appreciated by the Libyan government, but criticised by rights groups as reports of civilian deaths circulated the media.

Egypt, which supports Al-Thinni’s government, has called on several occasions for the lifting of the UN arms embargo, which has been in place since 2011, with the aim of “stemming the repression of Muammar Gaddafi” in 2011.

Throughout the past year, Egypt hosted representatives from Libyan tribes in order to resolve the conflict within Libya and to address the main challenges and threats posed by Islamists. The latest of these meetings was held in May and representatives from Libyan tribes called for more Egyptian support for Libyans, Al-Thinni’s government and the Libyan army.

During their visit, the Libyan tribes, who fully support the Egyptian government, called for facilitating movement across the western border, a point which is currently being negotiated.

Kamel Abdallah, Libyan Affairs Expert at the Al-Ahram Center for Political and Strategic Studies, said that “there is no development regarding Egyptian-Libyan relations”, calling Egypt’s support for Libya a result of the aggravation of the political crisis, which reached Egyptian nationals.

He noted, however, that during former presidents Mohamed Morsi’s and Hosni Mubarak’s regimes, Libya’s situation was not a priority compared to now.

Abdallah added that Egypt is currently supporting the one political faction that represents legitimacy to Egypt. This originally stems from fear of the Muslim Brotherhood, as Egypt is afraid of the Islamist’s dominance in the Libyan capital, Tripoli.

Tripoli has been under Islamist control since August 2014 when Al-Thinni’s government was ousted and forced to form another government in Al-Beida. The Islamists, branding themselves Libya Dawn, seized other cities, including Benghazi, Sirte, Derna and Misrata, and reinstalled the old General National Congress (GNC).An estimated one million Egyptians are residing in Libya; however the worsening situation in the country was reflected on Egyptians nationals. As the number of violent clashes increased, dozens of Egyptians were killed and thousands found no other resort but to return to Egypt to escape the deepening crisis and Islamist control.

The decapitation of the 20 Egyptians was the most prominent incident in a long row, ultimately driving more than 45,000 Egyptians out of the country, forcing them to face the threat of unemployment in Egypt, while the Egyptian population remaining in Libya is living under constant insecurity.

Relations with Egypt and Palestine during the past year have been divided between the Palestinian Authority (PA) controlling the West Bank, and Hamas controlling the Gaza Strip.

Egypt has been supporting the PA’s Mahmoud Abbas in every move towards acquiring statehood and peace with Israel. This was highlighted when Egypt, among other Arab nations, backed the Palestinian statehood bid presented to the United Nations Security Council towards the end of 2014.

The bid was rejected, although Palestine’s next move to the International Criminal Court to hold Israel accountable for war crimes gained Egyptian support.

According to Palestine Expert at the Al-Ahram Center Mohamed Gomaa, the past year has witnessed “positivity” concerning the relations between Egypt and the PA.

The Gaza Strip has been controlled by Hamas since 2007. During the Palestinian-Israeli conflict in 2014, Egypt mediated a ceasefire agreement between Palestinian factions and Israel.

Egypt is linked to the Gaza Strip through the eastern Rafah border. The border has been mostly closed since the ouster of Morsi in 2013.

Relations between Hamas and Morsi have always been questioned. The former president is facing trials over espionage for Hamas. He was also tried for “prison break”, allegedly committed during the events of the 25 January Revolution. The prosecution accused him of collaborating with Hamas members who purportedly freed him from his imprisonment.

Egyptian media always criticised Hamas’ relationship with the former president and reports circulated over the involvement of Hamas in the rising militancy across Egypt, especially in North Sinai.

Al-Sisi referred to the involvement of “foreign elements” following major attacks in Egypt, notably the 24 October attack that left at least 30 personnel killed and was followed by an even larger attack on 29 January targeting Battalion 101, security facilities and checkpoints in Rafah, Sheikh Zuweid and Al-Arish.

Accordingly, security measures were taken to stop the movement of terrorists and weapons between Egypt and Gaza. This included the implementation of a 5 km buffer zone from the border to restrict tunnelling activities .

During Mubarak’s and Morsi’s regimes, the tunnels between the Gaza Strip and North Sinai were used extensively as the main passages for trafficking between the two countries.

Public anger has driven two lawyers to file lawsuits against the movement to brand it a “terrorist organisation”, taking the evidence used in Morsi’s espionage and prison break cases to court.

A Cairo court designated Hamas a “terrorist organisation” in late February; however the State Litigation authority appealed the decision and the verdict was cancelled in June.

Gomaa said that the way Hamas deals with the internal situation of Egypt caused tension between the Egyptian state and the movement, as Hamas’ inclinations were in support of the Muslim Brotherhood.

Gomaa added that despite the tension, the relationship has not reached the level of “total estrangement”. He noted that “the tension is likely to decrease in the future” but will not be completely eliminated, as Egypt will not recognise Hamas as the legitimate power controlling Gaza.

The ceasefire negotiations of the Gaza war were held in Egypt in 2014. Hamas’ delegation however was not invited alone; other Palestinian factions, including the PA, attended the negotiations.

Egypt and the Yemen gamble

In March, Egypt announced it was joining the Saudi-led coalition to militarily intervene in Yemen to fight Houthi Shi’a rebels with the aim of “restoring stability and legitimacy in Yemen”.

The move was criticised for its historical parallels with the 1962 war in Yemen,  when Gamal Abdel Nasser involved the Egyptian army in Yemen’s civil war, which back then became a heavy financial and military burden on Egypt, costing the lives of around 20,000 Egyptian soldiers.

Al-Sisi however addressed the public concern by stating that the intervention was “not an aggression”, but was for the sake of Middle Eastern “defence and security”.

Officials repeatedly cited the need to preserve the integrity of the Bab El-Mandeb strait and the security of the Gulf states as reasons for the military intervention, with Al-Sisi calling Gulf security “an integral part of national interest”.

The closure of the strait would shut down any traffic through the Suez Canal, greatly hampering the Egyptian economy, since revenues from the canal amount to roughly $5.5bn each year.

With these threatened and the Saudis, leading the coalition, being the main financers of Egypt at the moment ,there was little choice for Al-Sisi whether Egypt was to participate or not.

One aspect of the conflict and Egyptian participation seemingly is the debt it owes to Saudi Arabia. Estimates suggest that the money provided by GCC countries since the ouster of Mohammed Morsi amounts to roughly $23bn. Losing such vital support is tough for any country, but especially for one that’s struggling to recover from a political and economical crisis.

A study by the German Institute for International and Security Affairs (SWP) links this one-sided dependency to the Egyptian aspirations of forming a Joint Arab Force, as a “crucial step to convert one-sided dependency into mutual benefit”. This approach, though, given the fact that Egypt’s dependency on Gulf money won’t vanish in the foreseeable future, mirrors a mercenary approach to the problem – troops for money.

However, this still leaves the question open as to why the Egyptian participation was comparably limited. A reason the study cites might again be the negotiations about the Joint Arab Force with Egypt being able to retain a trump card by withholding all its military power, virtually demonstrating to the Saudis the necessity of enlisting Egyptians to help in the struggle.

In Yemen, with the very limited intervention sparing Egyptian troops of any serious danger, this approach might be to the benefit of Egypt, at least on short-term, but the country risks getting pulled in ever deeper into Saudi Arabia’s regional conflict with Iran, thus into a conflict that’s likely to be way bloodier for Egypt than the limited Yemen intervention.