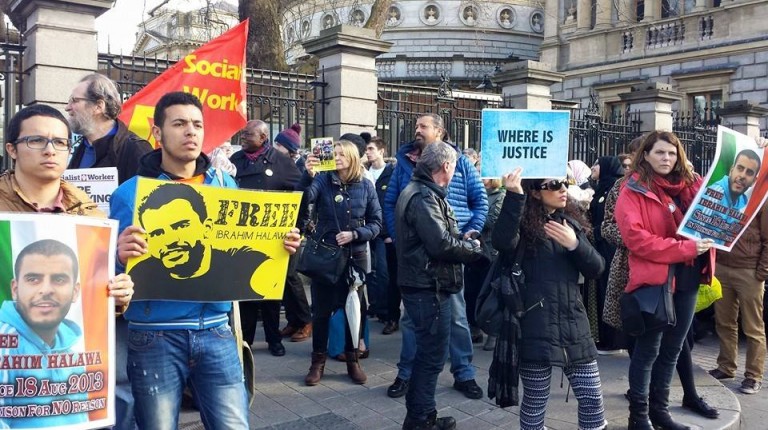 The Irish foreign ministry said it is seeking to acquire a presidential pardon for detained Irish teenager in Egypt Ibrahim Halawa, but only after the trial ends, local Irish press reported on Friday.

This is the second time Halawa enters a hunger strike during his nearly two-years-long detention period following his participation, along with his siblings, in the pro-Muslim Brotherhood Rabaa Al-Adaweya camp in 2013.

Halawa is being tried in the case of the Al-Fatah Mosque clashes that took place in Ramses Square, on charges of belonging to the Brotherhood, murder and attempted murder, vandalising the Al-Fatah Mosque, and interrupting prayers there, along with 494 other defendants.

Earlier this month, the trial was adjourned for the seventh time, which sparked an angry response from his family living in Dublin. They led a small rally protesting his detention and demanding his immediate release.

Halawa wrote from his prison: “I refuse to eat until I am permitted to return to Ireland.”The letter was smuggled to his family during his mother’s visit to prison in Cairo on Thursday. His family reported: “Ibrahim has been facing serious heart pain. His mother received a call to go visit him, but all his visit belongings were barred from entering. The visit also lasted for only five minutes from behind barbered wires.”

Halawa was only 17 when arrested, a minor according to Egyptian law. According to his sister, no evidence has been provided to show that Ibrahim was ever involved in any illegal activity – instead he has been arrested for peacefully exercising his right to freedom of expression.