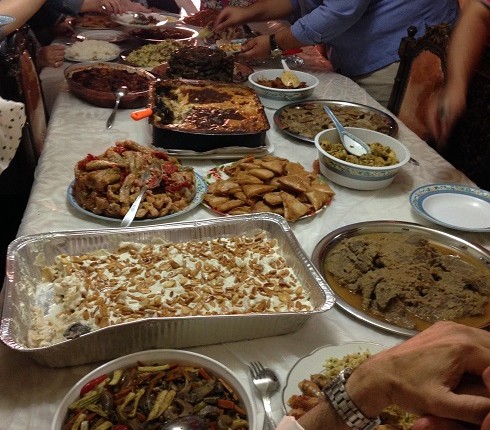 As Ramadan approaches people’s anticipation for the Maghreb prayer to sail across the sky, announcing the time they’re allowed to start eating, increases. The scenes where tables are filled with different kinds of food and various types of juices and drinks with family members  around is not far away. The famous traditional songs which welcome what’s been called the “the month of generosity” have already started to spread around the streets of Egypt.

But recently, the habits Egyptians have developed in dealing with Ramadan have become far removed from the main purpose of the holy month itself.

Just a simple walk down the street would be enough for any person to be dazzled with the huge and unlimited numbers of advertising billboards. The visual ads that come in several shapes and sizes are all about the series which will be aired on TV and radio channels throughout the month.

Until now, more than 35 drama series’ have been announced for airtime on different private TV channels, some of them starring the same actors. Yet, purportedly each has its own theme that discusses a different issue than the others.

“Ramadan now has no taste or emotions,” says 60-year-old Nashwa Wassim. “Back in the time when we were children, there were only two drama shows to be aired on TV, yet the amount of joy we had while watching them was indescribable.”

Wassim remembers the time when the whole family gathered around TV for just an hour after Iftar, to watch the show, then to spend the rest of the evening visiting their families and friends.

Although, Ramadan has been known to be the month that brings together the whole family over food and TV afterwards, the amount of negative energy currently spread through the dramas shown on TV has nothing to do with the positive, highly spiritual aspects the month aims to develop in people.

This can be clearly noticed by the increasing amount of series’ featuring murders, sex and unethical actions, written to speak of our reality, as their writers claim.

“Now, you get to watch many series, but you don’t trust any of them to teach your children manners, as the ones – back in our time – used to do,” Wassim added.

Another side that has recently faded from Ramadan is “Taba’ El-Zeyara”, which is a tradition in which people have to give away some of the food or dessert they’re preparing for the day to their neighbours, so that they all would share the same food together.

Wassim smiled while recalling that their door bell never used to stop ringing, as all their neighbours came to give them part of their food. Now, however, they don’t know any of their neighbours, as they “sadly stopped doing that tradition”.

Samia Khedr, a Sociology Professor, put the blame for society’s shift on the highly consumerist atmosphere, whilst pinning the loss of the holy spirit of Ramadan down to technology.

“The fast-growing technology led to breaking family’s connections, which was the combining secret they survived on in the past,” she said. “Now that there are lots of different types of shows, and several ways of watching each, why would a family sit all together to watch the same show?”

The fasting month in Islam, in which Muslims are asked to prevent themselves from eating and drinking from sunrise to sunset, was originally used for people to feel the suffering of others who are unable to find food at anytime. Ramadan also serves to teach people how to control temptation.

Yet, the actual amount of food consumed in Ramadan by families is much more than they originally use.

The consumption rate of food commodities rises 70% more than usual in Ramadan, and some products’ consumption rises to 100%, according to the Information and Decision Support Center.

It is culturally known in Egypt that tables should be filled with several types of food for people, more so than the usual amounts they eat, to make up for the time they spent without eating.

It is also a sign of upward mobility; the amount of generosity in Egypt is usually equated with the amount of food served for visitors.

“It’s a thing we’ve been raised on, food tables should be filled to the maximum,” Wassim agreed.

Moreover, the common belief is that people’s hunger will lead them to eat double the amount they usually do.

Raising the current young generation on the things we were raised with, without questioning whether they are right or wrong is another reason why society has turned into a consuming society.

“We need to have awareness campaigns to teach people how to correctly use the products they are in need of like food,” Khedr explained “Yes food is important, but buying double the amount you need and throwing most out is not!”

Yet Omar Shahin, a psychiatrist, believes that the inherited culture is not the only factor in consuming a larger amount of food through Ramadan; there’s also a physiological factor.

“When you’re hungry, your brain sends misleading signals to convince you that you can eat a whole cow. Just with the first bite of the food, the signals go away, so you’re faced with the fact that you’re full,” he said.

Also, the fact that the fasting culture is not widespread among young generations leads to increase the desire of eating more.

Now that Ramadan is about to start, hopefully people will get the time to remember that the month is a form of getting closer to Allah, and pay more attention to feeding their souls as much as they care to feed their stomach.