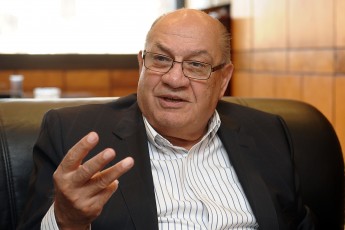 Wagdy Al-Kerdany, former head of the Chamber of Tourist Facilities, estimated the state has lost approximately EGP 4bn in taxes due to the lack of supervision on restaurants.

In an interview with Daily News Egypt, Al-Kerdany said the municipal authorities’ giving licences to restaurants without the Ministry of Tourism’s control or supervision is responsible for the recent finding that donkey meat is widely used.

How do you see the condition of tourist restaurants four years after the 25 January Revolution?

The tourism sector, as a whole, paid, and still pays, the price of the political turbulence over the past four years. Tourist restaurants are among the Egyptian tourist products and are, along with the rest of the sector, the most affected. As the political turbulence over the past period negatively affected foreigners’ flow to Egypt, Egyptians’ desire to go out for walks or meals, whether lunch or dinner, has also been affected. But things have changes over the past year, security is much improved. But you have to differentiate between licenced restaurants that are under the supervision of the Ministry of Tourism, and those under the municipals, the difference between the two cases is grand. The former type is under strict supervision from several entities, the most important of which is the Ministry of Tourism, as well as supervision by the ministries of Health and Agriculture. The other type is under the supervision of municipal councils, which is a reason for the poor performance and quality of food offered by them.

What about prices in the recent period?

This is a very important issue, as prices of food items have increased by over 20% in the last period, and still tourist restaurants did not raise prices since this January, contrary to the high prices of other restaurants that don’t pay sales taxes.

How could the situation be better for restaurants without licences from the Ministry of Tourism?

Then why does the state waste this money from its treasury every year, is there someone against that?

Certainly, there are people against the submission of these chains and big shops to the supervision to the Ministry of Tourism, mainly the municipal councils who benefit the most from these restaurants’ submission to them. We heard recently in the media that famous restaurants offered donkey meat to their customers. Tourist restaurants cannot afford to risk their reputation by offering spoiled meat or donkey meat.

How can a place with a reputation of over 60 years risk its reputation by selling donkey meat! There are more than 10 entities supervising us. Since the time of former Prime Minister Ahmed Nazif, I have asked for these restaurants’ submission, however, all my attempts have failed. At the end, issued decisions are mere ink on paper, and no one brings them into force. There are more than 16,000 restaurants outside the supervision of the Ministry of Tourism, against 1,200 restaurants subjected to all sorts of strict supervision.

What do you think is the solution for this crisis?

The worst part of this crisis is Egypt’s tourism reputation, especially in the eyes of the Arab tourists, who are the tourists with the highest spending in tourism restaurants. How would they see the situation especially after Daily News Egypt confirmed the presence of donkey meat in Egyptian restaurants? This impacts all restaurants, including tourist ones. The issue is serious and it negatively affects Egypt’s tourism reputation. To solve this issue, there should be one entity to inspect restaurants with regards to health aspects, and then Tourism Ministry should supervise these restaurants. The country’s reputation should be protected against this phenomenon of negligence and fraud. The government now has a strong desire to change and improve the situation, as tourism is an important source of the national income.  The Chamber’s members met Prime Minister Ibrahim Mehleb, where they presented a group of their demands (some of their requests), including the quality’s improvement of this industry (tourism industry).

How do you see the turnout during this month with the start of Ramadan?

During the first week of Ramadan, turnout rates are very low, because customers prefer to have iftar with their families. Turnout increases over the second week. I expect that turnout will be estimated at 65% to 70%, instead of 55%, which was last year’s turnout.