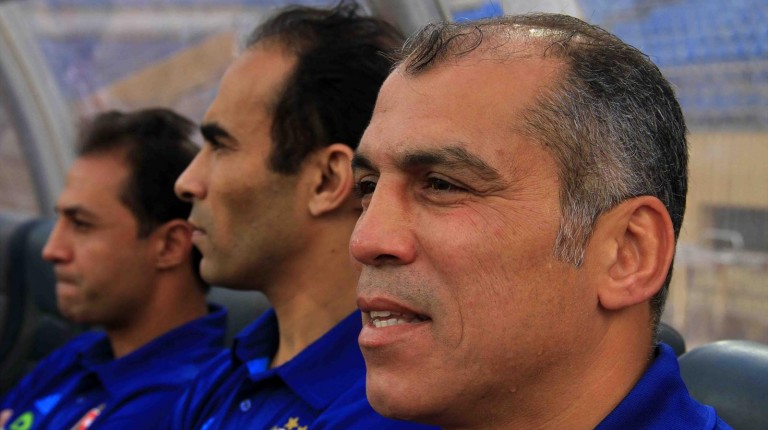 Captain Mohamed Youssef, former coach of Al-Ahly Football Club, is considered a distinguished coach due to his performance and his results, as he entered into training immediately after his retirement as a player with Enppi. He then trained Al-Ahly’s junior teams and he progressed from assistant to a number of Al-Ahly coaches to becoming the technical director. With Al-Ahly, he won many championships; whether as a player or a coach, until he went to Iraq to coach Al-Shorta Sports Club. Youssef led the club to results that were the first of their kind in the history of the club, but he suddenly returned to Egypt despite being in the lead in the Iraqi league.

Your return from Iraq was a surprise as you were in the lead of the Iraqi league, so why did you return?

Indeed, I was in the lead on the Iraqi league with Al-Shorta Sports Club, which I coached. Nine members of the Iraqi national team were from my team, but the head of the club interfered too often in my work. That was not good, especially since I was the lead of the league, with a big gap between me and second place.

Do you plan to return to coaching here?

I have some offers in Iraq that I am examining, especially since I have given a lot. Al-Shorta Club ended the league without defeat for the first time and with the strongest offense and defence lines.

But life in Iraq is extremely dangerous, why are you considering going back?

Life there is good; security is good and the situation is non-problematic. More importantly, the “Islamic State” is in the north, far from Baghdad, and some games are attended by over 45,000 spectators in the stadium.

Why did Egyptian football deteriorate?

Between 2006 and 2010, we could not plan. It was a coincidence that we had a strong and young generation, and, over these years, we did not plan for after this generation and we did not prepare alternatives.

The problem is in the administration then?

Planning is the basis for training and administration, and those who develop the strategy at the Football Association and technical committees are all responsible for the deterioration in conditions. Their task is to seek assistance from experts to plan for the future. Egyptian football will not develop without proper planning and scientific preparations.

How you see the planning on the local clubs’ level?

Al-Zamalek Club started preparing well; they brought 17 players and are preparing them. Al-Ahly is also paying attention, but Garrido’s time affected the development; the advantages are few with long periods apart.

We have drifted away from the African Cup, and the World Cup dream is becoming out of reach. What do you think about that?

We drifted away from the African Cup of Nations because of poor planning. We did not qualify for three tournaments, and, as I told you, we need good planning to return to the continent’s lead.

The World Cup is very difficult to reach, because Africa’s professional players care so much for the World Cup and they are keen on being watched by the whole world, especially players’ agents who attentively follow the tournament.

We cannot withstand the pressure and power of these games. If we want to qualify for the World Cup, we should increase the number of our professional players.

Do we have many professionals?

We only have 10 professionals and that is not enough.

What do you think is a suitable enough number?

There are 35 professionals in the front lines of international teams. Brazil, for example, only takes players ranked in the major champions.

Why isn’t there a professional Egyptian coach on the international and Arab level?

There isn’t because the Egyptian coach has to educate himself with training. We also lack good agents; Moroccans, Tunisians, and Algerians already have agents.

Is there hope for Al-Ahly or Al-Zamalek to win FIFA Confederations Cup?

Al-Ahly and Al-Zamalek are in the strongest competition for the FIFA Confederations Cup, and they are playing against major teams. It is not an easy path, especially with the strong Tunisian teams.

Which team is closer to a higher place?

Al-Ahly has more experience, but it is still hard and we cannot predict the results, which will depend on the time of the game.

Why are coaches being evaluated as per the results of a game or two? And why are some of them quickly laid-off?

Dismissing a coach after a game or two means that the decision of the management was wrong from the beginning and their choice must not be on a personal level. There must be some standards; when many changes occur, they negatively affect the team as a whole.

On the international level, we saw the UEFA European Championship when Juventus made it to the finals for the sixth time but did not win the cup, why do you think this happened, as a coach?

Juventus made it to six finals but did not win the cup. I think their management has to look for the reasons behind this.

3-     Youssef played in Turkey for four years with Denizlispor and Diyarbakırspor, for which he played 53 games in 2002. Then he played with Enppi for two years then retires in 2004.

4-     He played with the first team for eight years in which he participated in 78 international games. He also played in the FIFA Confederations Cup in 1999.

5-     After he retired, Youssef was the general coach of Enppi for two years, then a general coach for Al Ahly for 16 years. He became the assistant coach with Hossam El-Badry and Manuel José for Al-Ahly. He was the youngest general coach in the history of the team. Youssef won two CAF Champions Leagues and the CAF Super Cup. He left coaching after some dissatisfactory results with the Egyptian League then became a coach for Iraqi Al-Shorta Club.